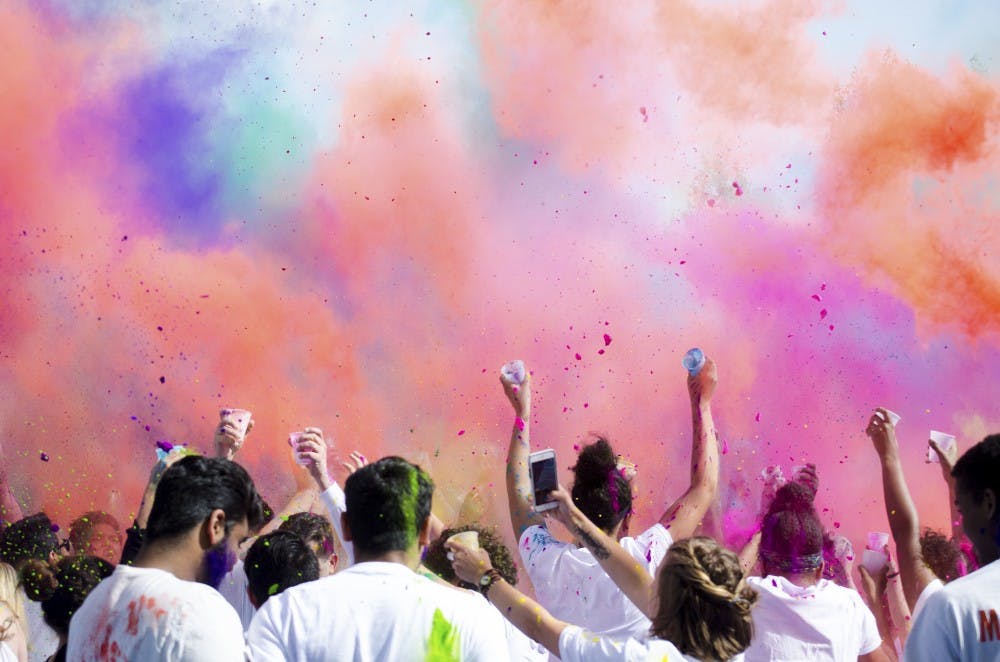 
Colors fly at the 2017 Holi celebration at Speakers' Corner.

The colorful and lively Hindu festival of Holi will be celebrated at Elon this month with vibrant colored paints, dyes and music.

The Holi festival will occur in Speakers' Corner at 4 p.m. Friday, April 13. Following the festival will be Indian Shabbat held in the Numen Lumen Pavilion at 7 p.m.

Holi is rooted in Hindu mythology, representing the triumph of good over evil and the interactions of the Hindu gods and goddesses. The vibrant colors and music make it a cheerful and inviting festival for many to attend.

Abigail Mathews, multifaith intern at the Truitt Center for Religious and Spiritual Life, is the head of planning for the event and hopes it will educate students about the tradition.

“It’s basically signaling the end of winter and coming of spring,” Mathews said. “The triumph of good over evil relates to that — the changing of the seasons.”

Sophomore Shariq Ali, also a multifaith intern, is excited about bringing the festival celebrated in India, Nepal, Bangladesh and other countries around the world to Elon students.

“We throw colored powder to represent the earth returning to color and life and good triumphing over evil,” Ali said. “This is a very happy occasion, and we hope to enjoy it with people of all different backgrounds and worldviews.”

Mathews believes that the Holi festival will provide a valuable, exciting and different type of event for students.

“It’s a really fun time but also a cool way to learn about a different culture and participate in something out of the ordinary at Elon,” Mathews said. “You’re going to be hearing Bollywood music blasting from the speakers here. That’s not something you see every day. Hopefully it will be a good way for people to step outside of their comfort zone and Elon bubble.”

Ali is also enthusiastic towards observing the ways different students interact and react to the festival.

“We have a special focus on the color this year, which people will see,” Ali said. “It will just be really exciting to have a great time with everyone while learning about the celebration in different ways.”

Mathews believes that people are often unsure about the meaning of the Holi festival and its importance in Indian culture.

“You’ll see a lot of color runs or something like that, so people will think that Holi is just a fun event where people throw colors in the air and it doesn’t really mean anything,” Mathews said. “Obviously it’s a great event for the Elon community, but it’s also an educational opportunity to learn more about different religious traditions.”

“I think it’s important to combat the ignorance that comes from not knowing what the holiday is,” Mathews said. “That’s not necessarily the fault of anyone, but this is kind of our opportunity to educate about a different religious tradition so that people can be more globally aware.”

Mathews believes events such as these are able to become more prevalent on campus due to the increased support for the Truitt Center.

Ali hopes to see the event in future years as a cultural celebration bringing important traditions to the Elon community.

“I definitely hope this event continues in the future,” Ali said. “Especially because it is a time for people to have an enjoyable time while also building relationships, keeping positivity and appreciating everyone around you.”

Educational aspects about the festivals will be incorporated throughout the event for students to observe, while still maintaining the energetic and celebratory atmosphere for the tradition.

“It’s not as programmed as other events because it’s just a time to kind of enjoy the colors in the air and being with your friends and having a good time,” Mathews said.

Mathews enjoys both the work at Interfaith and being able to share the different experiences important to various cultures and religions to which students may not have otherwise been introduced.

“In Interfaith work, there’s lot of work to reconcile the differences between different religious groups by seeing how similar we are and appreciating those differences,” Mathews said. “I just wanted to be able to see the beauty in another religious tradition."

Ali also places significance on this event in both a global and local context.

“People can expect to learn about the significance of Holi, participate in activities, throw colors and dance around to some great music,” Ali said. “We hope this event will bring a lot of smiles and joy to everyone that participates.”