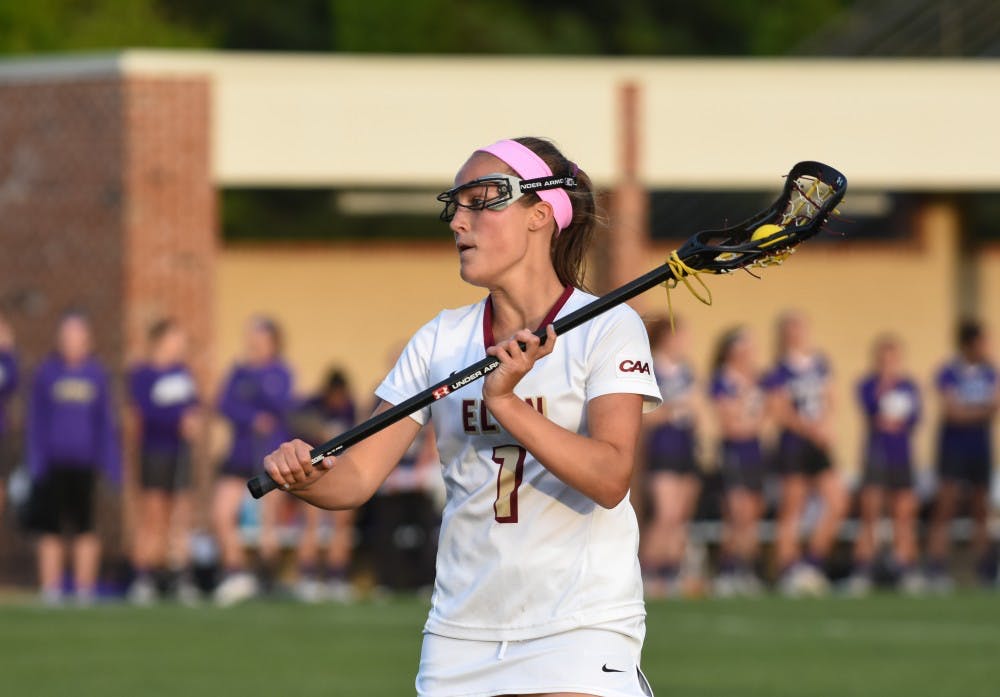 The Elon University women’s lacrosse team hosted the No. 6 Towson University Tigers on Friday night at Rudd Field. Elon was unable to knock off the nationally ranked Tigers, dropping the decision 10-4.

The story of the game was riddled with mistakes for Elon. The Phoenix had 27 turnovers and gave up 10 free position opportunities. Factor 31 shots against and 20 fouls for the Phoenix, and you have a recipe for disaster.

“We played scared on offense, we turned the ball over way too much and we fouled too often on defense,” said fifth-year head coach Josh Hexter, visibly frustrated. “One of our issues this year with the team has been work ethic. And it shows in practice, and I think it shows sometimes in these losses where we’re not aggressive enough and we turn the ball over too much.”

It wasn’t all bad for the Phoenix, though. The Phoenix dominated draw controls in the first half, winning nine of 10 draws. It was also effective in its clears, successfully moving the ball on all but four of their 25 chances to do so.

A bright spot in the Phoenix lineup was senior goalkeeper Tori Cipollone. For the second straight game, she posted a double-digit save count with 13. Cipollone had 10 saves against Hofstra on April 6. With her career in the Maroon and Gold winding to a close, she is playing as if she has nothing to lose.

“I’ve been treating conference play as a new season because I know we got off to kind of a rocky start,” Cipollone said. “So just coming out strong and being focused on conference play, knowing that this is my time … there is absolutely nothing to lose and I want to do everything that I can for my team while I’m still here.”

While their 2-9 record may not be pretty to look at, it is important to keep in mind that the women are playing against some high-quality teams. Seven of Elon’s 11 games this year have come against top 25 opponents nationally.

“If you’re a real competitor you want to play the best teams you can possibly play. And we’re good physically enough where we should be winning these games,” Hexter said. “We’re having a tough time getting mentally ready.”

“You’re never going to get better if you don’t play the best,” Cipollone said. “No matter what the outcomes were of those games, those were in the past, but now that experience is going to help prepare us for the future and for the years to come.”

The road doesn’t get any easier for Elon the rest of the year in conference play. After winning their first game and now losing to Towson, Elon is tasked with facing the No. 4 nationally-ranked team, the Dukes of James Madison University.

Face-off for the Sunday, April 15 game against JMU is slated for 1 p.m.