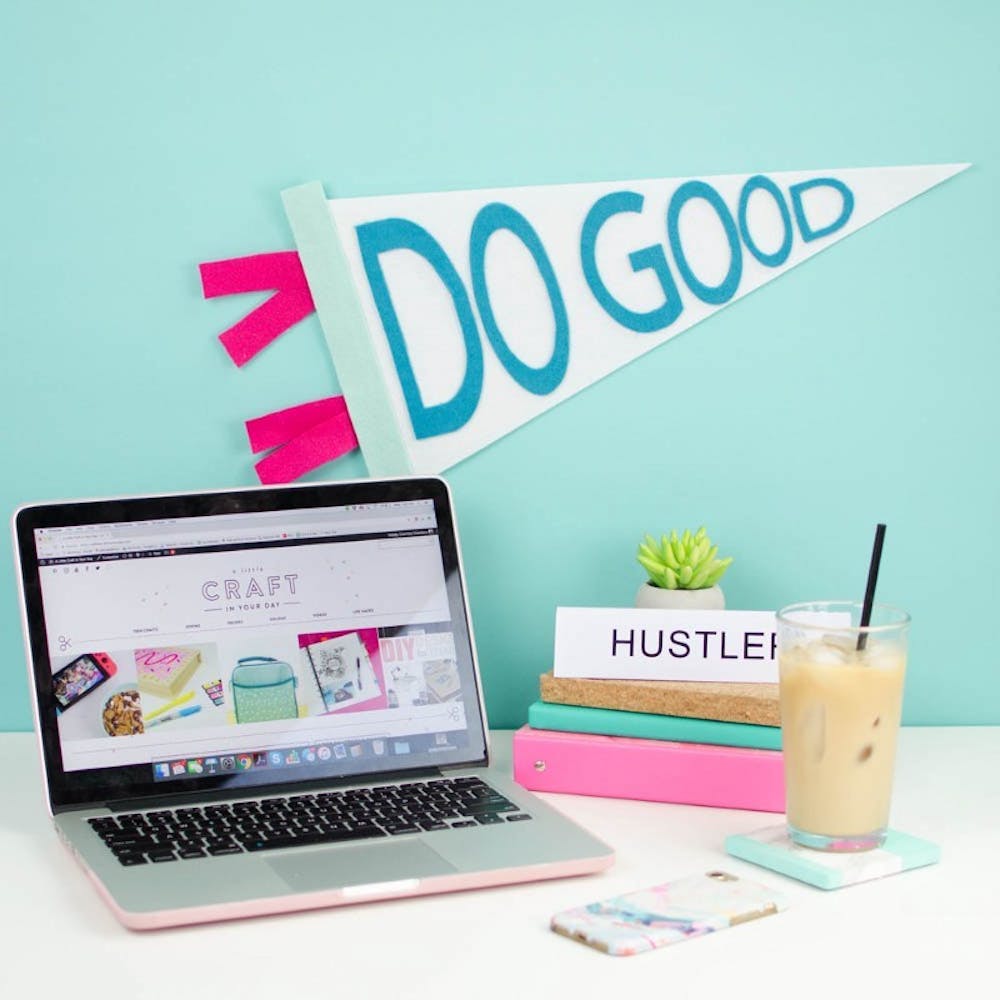 As a kindergartener, while the children played on the playground, Courtney Chambers sat on the side, occupied with crayons and coloring books.

Courtney’s kindergarten teacher approached her parents and suggested their daughter see a therapist. She was concerned the child’s insistence on coloring was replacing social interactions.

Now, as a sophomore at Elon University, Courtney has gone from coloring in between the lines of coloring books to thinking outside of the box with the development, creation and promotion of her ideas. Since her freshman year of high school, she has been managing A Little Craft in Your Day, a do-it-yourself (DIY) business and blog that provides her site visitors with affordable craft ideas and tutorials.

Encouraging others to craft

Courtney decided to launch her blog with Tanner Bell, the co-owner and executive producer of the company. At the time, DIY companies were only geared toward children, so she was eager to create a platform that gave teenagers the ability to express themselves.

“We want to provide our generation with a place to go to find inspiration ... and feel capable of creating things,” Courtney said.

In her studio room, shelves are lined with vivid hues and various shapes of previously-made crafts. Boxes, bins and containers hold her paint brushes, scissors, yarn and glue, ready for use.

Courtney said since crafting is a process of trial and error, she is prone to making mistakes — but she views them as learning opportunities.

“I don’t know that everything I do is going to work, but I just go about it in the way I think will work the best,” Courtney said. “If it doesn’t work, that’s OK.”

Once a week, a professional photographer meets with her to photograph her crafts for the blog.

In addition to the visuals on her site, Courtney writes craft tutorials with an introduction, a supply list and tips and techniques to create the product.

The creation process first begins when Courtney devises her project ideas. Whenever she shops, her mind is programmed to view products as potential crafts.

“I see in black and white when I shop now because I realize that I can pretty much paint or spray paint or change the color or shape of anything,” Courtney said.

Project manager and editorial director Rachel Hensley said Chambers is not satisfied focusing on only one project. She said Courtney has high expectations for herself and strives to exceed them by producing many meticulous crafts.

“Sometimes, it takes her a little while longer to finish a task because in her mind, she wants to start four or five so that she can get four or five done,” Hensley said. “She can’t just start one and finish one.”

Once Courtney updates her blog with the new craft, she markets it on social media to reach her target audience: female teenagers. She aims for an authentic, personal and relatable online presence, which acknowledges her followers’ opinions.

“The feedback from visitors is always so fun to read,” Courtney said. “Seeing results from them is always exciting.”

Creating is only part of the process

In addition to the blogging process, Courtney also communicates and collaborates with her employees around the country, manages finances, creates content for sponsors and media companies and travels to conferences.

Six contracted sponsors and other advertising companies fund her business and pay her based on the number of people who visit her blog.

Her sponsors also send her products for her to use for blog posts and as product placements.

“When the company is on the line, and we’ve got some people to impress, she pulls out all of the stops and does a great job,” Hensley said.

“A startup is so much work, so you must be on your game and show up on time and think through things very meticulously,” said Doherty Emerging Professor of Entrepreneurship Sean McMahon, who has Chambers in his entrepreneurial finance class.

According to McMahon, business owners succeed when they constantly perfect their ideas to effectively accomplish tasks. McMahon said he notices these traits in Courtney.

Courtney’s mother, Eileen Chambers, is impressed her daughter is willing to step outside of her comfort zone for her blog.

“She really pushes herself because that’s where her passion is,” Eileen said. “I never put anything past her because once she sets her mind to something, she really sticks with it.”

Courtney learns about the business field as an entrepreneur major at Elon.

She said her business was financially successful enough that she did not need to attend college, but she decided to pursue an education for a stronger knowledge base.

McMahon has taught her about the struggles of managing a business and given her strategies to overcome financial and technical obstacles, Courtney said.

McMahon said Courtney’s’ performance and ability to think quickly impressed him. Her kick-starter business presentation was at the top of the class.

Chambers presented her blog to the board of directors at the Doherty Center for Creativity, Innovation and Entrepreneurship.

She also led a workshop with Hal Vincent, lecturer in communications, at the Co|Operative, a nonprofit business startup incubator in Graham. She discussed her blog and explained how she attracts and communicates with stakeholders while producing content.

Developing throughout the years

Chambers was born and raised in Philadelphia. Her crafting progressed from scrapbooking to card-making in middle school to DIY in high school.

Chambers said she hopes to continue expanding her blog in the future. After graduation, she said she will run her business full-time to continue sharing her passion for creating with others.