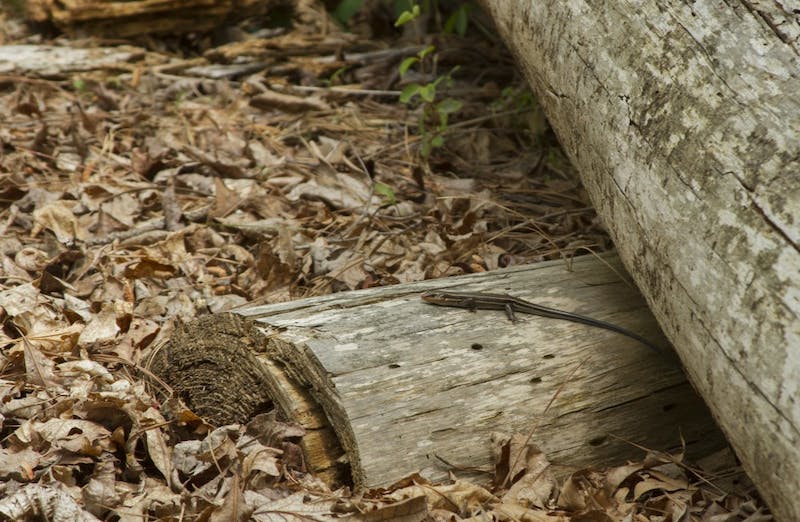 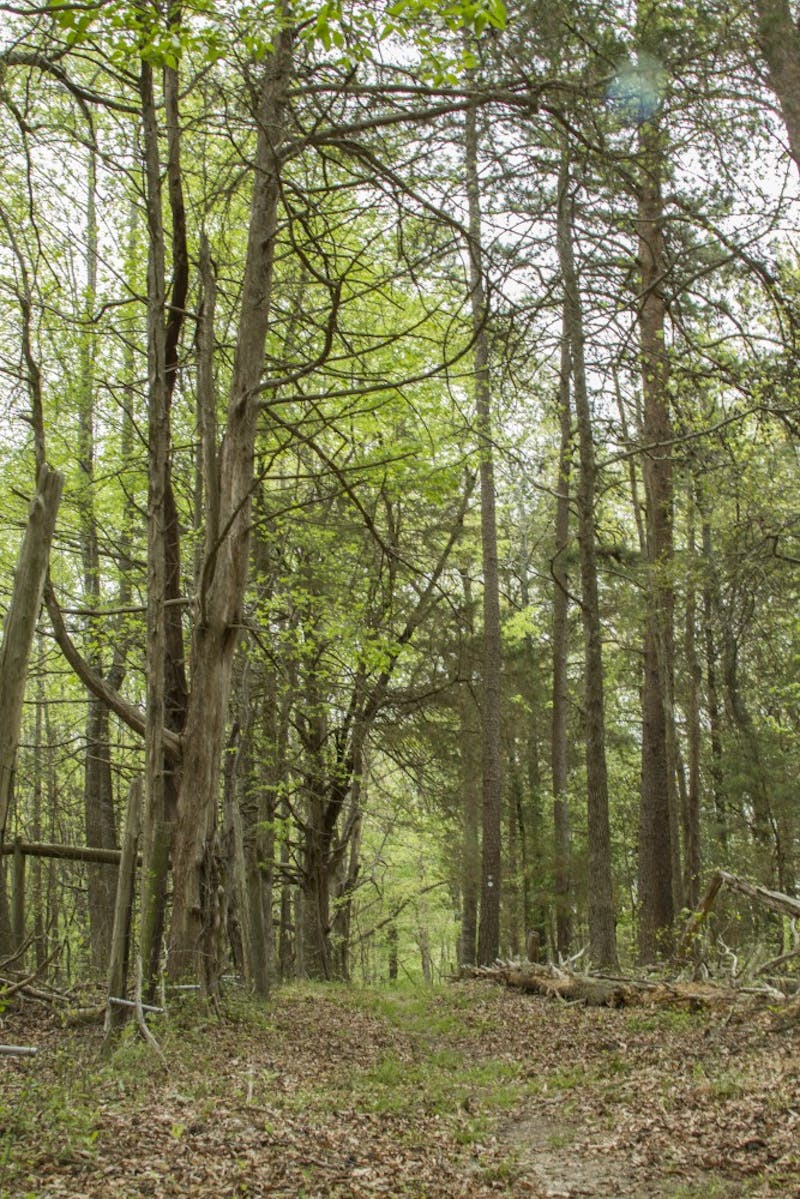 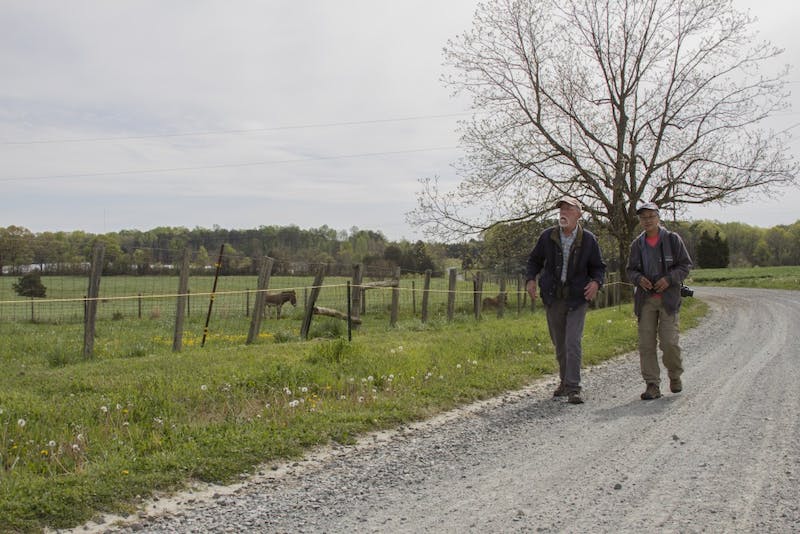 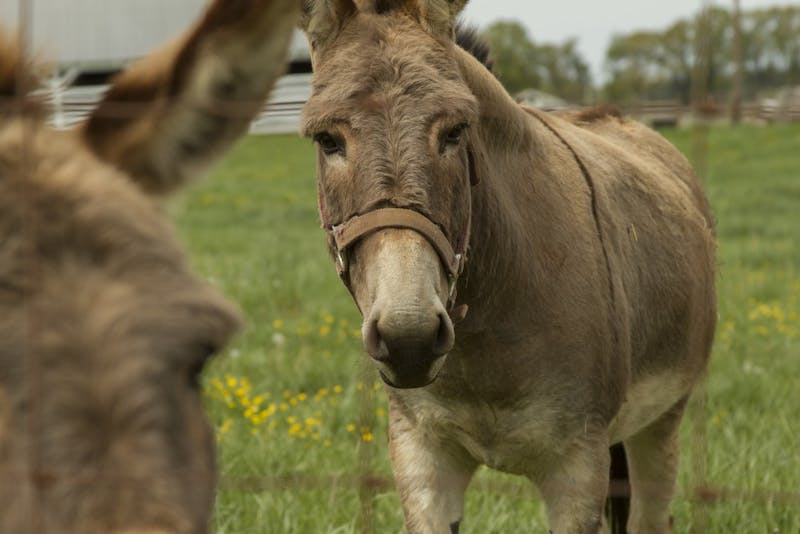 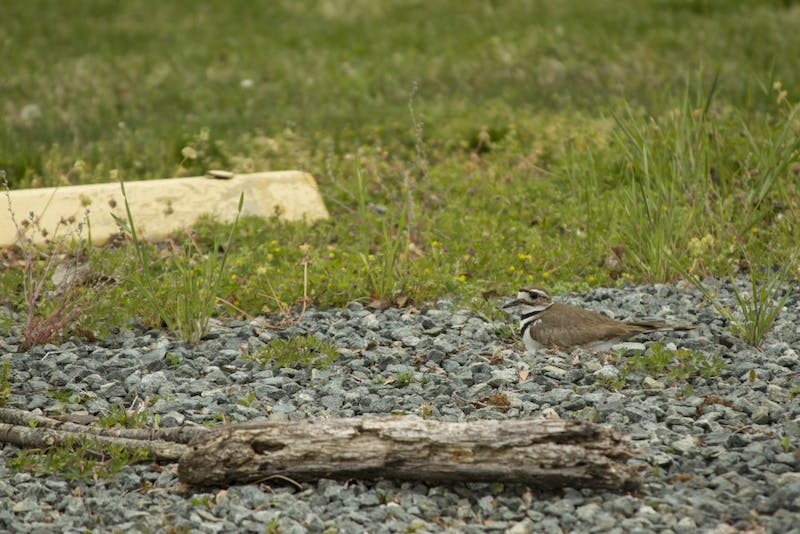 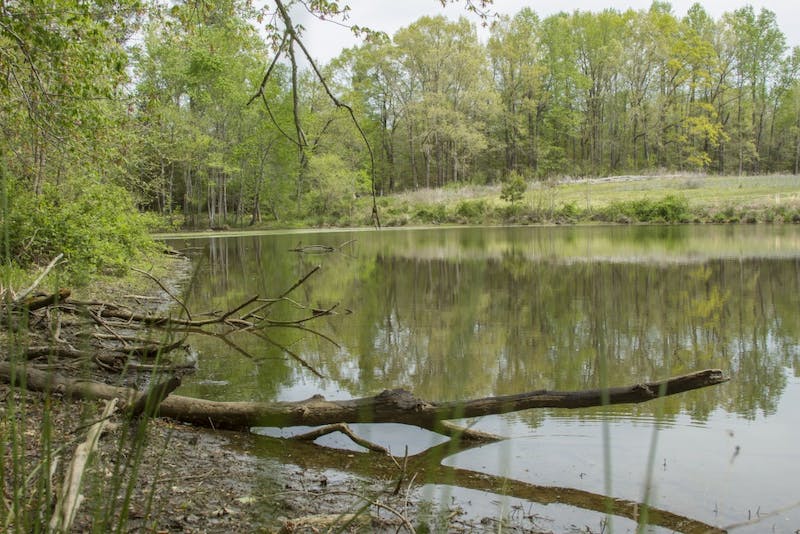 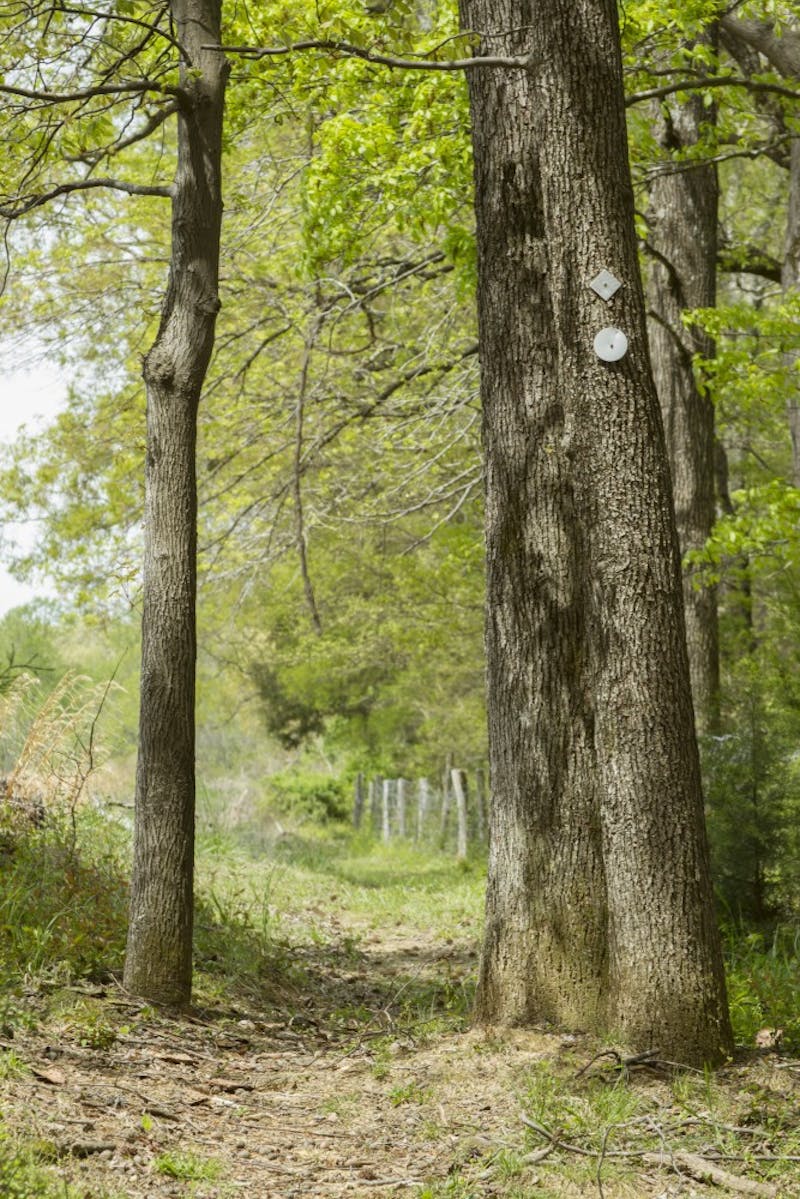 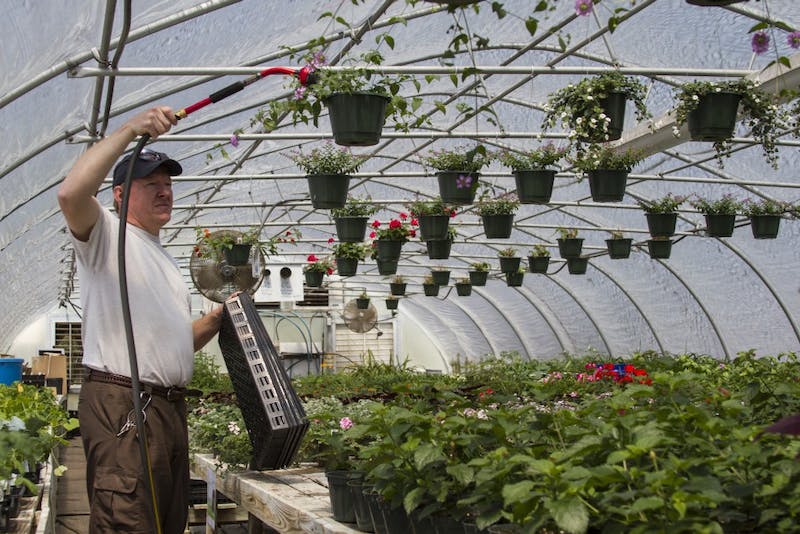 A gallery of images from The Breakaway Trail.

In the same time it would take Elon University students to drive to Harris Teeter, Wal-Mart and IHOP, they can reach the start of a new hiking trail, just 10 minutes from campus.

The Breakaway Trail begins at the Guilford County Farm and stretches 2.2 miles across farmland, grape vineyards, woods and a creek before ending at a pond.

The trail is a combination of many different landscapes, which is one of the big draws of the hike, according to John Gladstone, supervisor of Passive Parks & County Farm.

“We have the Travis Creek – which is a gorgeous creek – and rock outcroppings all along the creek and different varieties of crops to walk through: the wooded lands from pine forest to deciduous forest and higher elevation where it peaks and you can see the entire farm to lower elevation when you’re down in the creek itself,” Gladstone said.

The draw of the landscapes is reinforced by hikers.

“It’s unusual because it’s a combination of the woods trail – which is like what you would see in some parks – and then a nice farm trail so you get kind of a couple of things pleasurable out of it,” said Curtis Brooks, who along with his wife, Nan Dwyer, have already hiked the trail.

But beyond just nice views, The Breakaway Trail and Guilford County Farm are also popular for a lesser-known activity.

“Birds,” Brooks said. “It’s kind of known in the area as a good spot to find different kinds of birds.”

Which is perfect for bird watchers.

“It’s known as a birding hotspot if you’re a birder, which means you can see higher concentration of different species,” Dwyer said.

The Breakaway Trail is a part of the North Carolina Mountains-to-Sea Trail, which traverses the entire state. From Clingman's Dome in the Great Smoky Mountains to Jockey’s Ridge on the Outer Banks, the trail is nearly 1,200 miles long.

“The idea is to get from one end of the state to the other to check all the topography and different aesthetics and habitats and variation that North Carolina has to offer,” Gladstone said.

There are 18 segments in the Mountains-to-Sea Trail, with Segment 9: Revolution and Textiles running from Greensboro to Hillsboro. It is home to The Breakaway Trail.

Freshman Hailey Tucker, Elon Outdoors trip leader, is excited about the opening of the trail. She thinks people will be drawn to it because of its relationship to something larger.

“What would be really cool is the publicity that comes from the ‘Oh, this is a part of the Mountains-to-Sea Trail,’” Tucker said.

And senior Josie Reed, another Elon Outdoors trip leader, also thinks the trail and farm would be great places for Elon students to enjoy.

"Elon Outdoors wants to get more involved in the community and we haven't done much with the trail yet, but learning more about it, we would love to help get more Elon students involved in what they're trying to accomplish," Reed said.

By partnering with Friends of the Mountains-to-Sea Trail, The Breakaway Trail was built almost entirely by volunteers.

Friends of the Mountains-to-Sea Trail is an organization that includes groups of people across the state who help care and extend the trail. The organization also provides guides and information about the trail.

“They gather in their locations, and some of them even travel end to end to get the job done," Gladstone said. "But they are an incredible group that really make this trail happen.”

According to Gladstone, while county staff does some of the machine work, like mowing the grass and using weed trimmers, volunteers account for 95 percent or more of the work and the thousands of hours that go into making and caring for the trail.

The grand opening of the trail will be the kickoff event for people to come and engage with the farm and trail after years of work.

“This has been a long time coming,” Gladstone said. “To have something that has been officially designated as part of the Mountains-to-Sea Trail where people can actually come in and walk on a designed, professionally cut and built trail by their peers, their volunteers and to really have a unique place to come visit.”

The opening has also brought more attention to where the trail starts, at Guilford County Farm.

“Well it’s already been a great boon to the park,” said Ed Schubert, the farm manager. “The Mountains-to-Sea has had volunteer crews out here for probably close to a year, so they’ve been working on it for a very long time and they’ve done a great job on it. It looks fantastic.”

The farm also has an unusual backstory.

Previously known as the Prison Farm, prison dorms were constructed by low-risk inmates who were brought out to the area. The inmates built their own dorms on the farm by gathering stones from the grounds.

In 2015, county leaders decided to disband the prison, and farming operations were turned over to residents and the farm manager.

Currently at over 700 acres, the farm is occasionally used by Emergency Medical Services and  K-9 units for training. It also has multiple greenhouses that are used for selling plants and educational activities and event and meeting spaces that can be rented out.

“Frankly, it’s just kind of the thing I’d love to do more of — to partner up with different organizations that have something going on that they do that connects with what we’re doing,” Schubert said.

And Gladstone also hopes  the opening of the trail will help bring more attention to the farm and lead to potential partnerships.

“We have so many opportunities here at the farm. The trail is one piece to kick off the growth and uniqueness of the farm,” Gladstone said.

While April 27 will mark the grand opening of The Breakaway Trail, there are already plans to increase the length of the trail.

According to Gladstone, the new extension is in Phase Two of installation and construction. The design is finished and the first cuts have been made. The new addition would shift the trail from being a linear there-and-back hike to becoming a loop around the farm.

For students, it brings the outdoors a bit closer to campus

“For Elon, it is so close,” Gladstone said. “It’s an opportunity for the students, the faculty, any visitors, parents weekends, family weekends. They have a place to come, a place to meet, hike a beautiful trail, come see all the other opportunities that we have here on the farm.”

And for everyone else, it’s a fresh adventure.