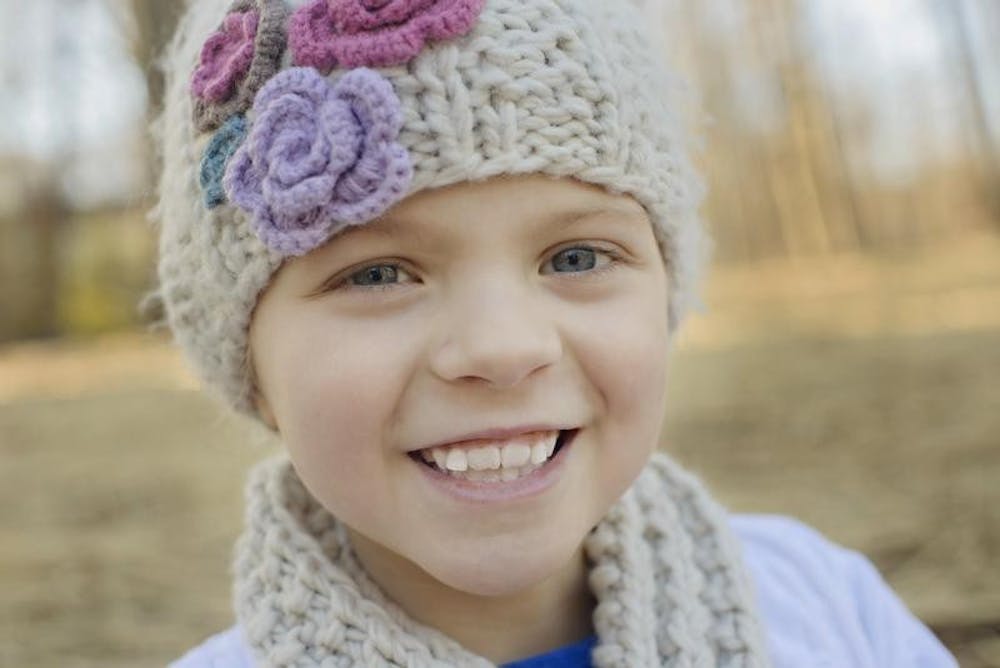 “When you hear the word ‘cancer,’” her father said, “Do you know what that is?”

Later, as an Elon University sophomore, Caitlin remembers her father’s inquiry all too vividly.

What was then a foreign concept soon materialized into a nightmare when Caitlin found out her younger sister, Campbell, was diagnosed with cancer at 3 years old.

Campbell was battling ependymoma. According to the National Cancer Institute, ependymoma is when cancer cells develop in the brain and spinal cord tissue. According to American Cancer Society, 200 children per year are diagnosed with ependymoma.

Caitlin grew up fast after her sister’s diagnosis. Her parents were often gone with Campbell for doctor appointments. While her friends hung out after school, Caitlin stayed home to watch her other sister, Caroline.

“It helped a lot to have someone who was always there,” Caroline said. “I would not have gotten through all of that without her.”

There was an ever-growing sense of pressure on Caitlin. Campbell continued to battle ependymoma while Caitlin looked out for Caroline. Despite all this, Caitlin found an outlet through which she could escape the hardship — dance.

“My life was getting so hectic and there was just something about dance that I was drawn to,” Caitlin said.

Dance was something Caitlin has been able to share with both of her sisters. At her studio, Gotta Dance, Caitlin and her sisters participated in a summer outreach program that allowed them to perform together.

The studio helped Caitlin throughout her sister’s battle. She made so many great friends at her studio who help her carry the weight, she said.

“Dance has given Caitlin another family to lean on,” said Allison Ivan, a junior at Elon who dances with Caitlin.

“I definitely think dance and the friends she had at dance helped her,” said Kendall Rich, a freshman at Elon. Caitlin, Rich and Ivan danced together for most of their childhoods.

“Dance gave Caitlin a place to escape to, a refuge of sorts, when home life got too chaotic,” Ivan said. “Sometimes you just need to dance it out because your body is able to process grief, pain and emotions better than your brain can.”

Dancing helped Caitlin forget what was going on in her life and focus her attention on something else for a bit.

“I would walk into the lobby [of the studio] and the weight would be lifted off my shoulders,” Caitlin said.

Caitlin was 16 when Campbell began hospice at home. One afternoon, Caitlin was in the living room with her parents when the hospice nurse came in and told them that Campbell did not have much time left.

Caitlin had planned on having friends from dance over that night, and the nurse encouraged it, saying that the positive energy in the house would help Campbell.

“We didn’t understand how close [Campbell’s passing] was,” Rich said.

The girls tried to keep the evening fun and lighthearted for Caitlin.

After her friends left, Caitlin crawled into bed with Campbell, the rest of the family following suit. Everyone fell asleep except for Caitlin. She laid there counting the seconds between each of Campbell’s breaths.

“I couldn’t wrap my head around what was happening,” Caitlin said.

Caitlin fell asleep. When she woke, she started to count the seconds again. But there were no seconds left to count.

Campbell Hoyt had passed away.

“It doesn’t matter how much you know or prepare,” Caitlin said. “It will still come as a surprise.”

Among the tragedy Caitlin experienced, dance has remained a constant source of happiness, and is a connection between her and her sister.

During her first year at Elon, Caitlin was a member of the Elon Dance Team. Later, she decided to laterally audition for the BFA dance program.

Hoyt received an email from the program after auditioning and read the word “Congratulations.” She began to cry from happiness and pride.

“I needed to be doing [dance], I love it so much,” Caitlin said.

Dance has offered Caitlin another opportunity to carry with her the memory of her sister.

“I think it’s the medium she chooses to honor her sister’s memory and a way for her to still feel that connection,” Ivan said. “I feel closer to Cam when I’m dancing and I think the same is true for Caitlin.”

“After Cam died, I can feel her when I am dancing or doubting myself,” she said.

Dance was not the only place where she felt a connection to her sister. After her freshman year Winter Term at Elon, Caitlin decided to rush.

The sorority’s national philanthropy is St. Jude Research Hospital, a special place for the Hoyt family.

Campbell stayed at St. Jude's, which provided her with the medical means to elongate her life, giving both Campbell and her family a little more time together.

“I think having one person who has been affected by the hospital is really powerful because it puts that physical, tangible aspect to what we’re advocating for,” said junior Caroline Lau, Delta Delta Delta’s philanthropy chair.

Caitlin carries Campbell’s memory with her.

Originally, she wanted to pursue a career in physical therapy, but after her freshman year at Elon, Caitlin realized this was what she wanted.

Now her goal is to work for St. Jude Hospital. Caitlin wants to honor her sister’s memory and give back to the organization that helped their family so much.

“If I could go work for St. Jude after graduation, that would be ideal,” Caitlin said. “I would love it.”