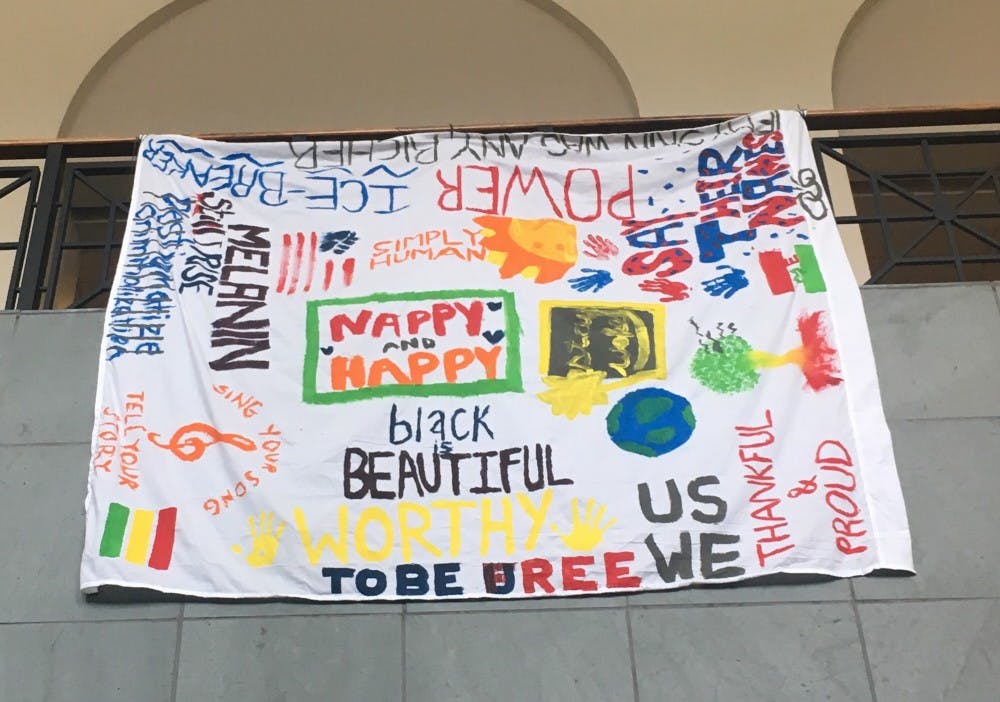 Junior Jayla Starcher was one of three minorities living in her Historic Neighborhood dorm during her first year at Elon.

“It’s intimidating to be in an area when you are new to Elon and where you don’t know anybody,” Starcher said. “You go through this identity thing where you try to find ways to fit in more, but that could mean not being your true self.”

And in part, this is exactly why she joined the team of residence life assistants for her sophomore and now junior year at Elon. Starcher wants to help bridge the gap between minorities and non-minorities on campus, especially when they are just beginning at school.

But it’s not only in the first-year experience that racial dynamics play out on campus. There seems to be a general disconnect between majority and non-majority groups.

Sophomore Lucia Safie, who identifies as a member of the Latina community on campus, has seen the various different ways of approaching diversity at Elon.

“I have seen groups of people try to change racism on campus, some people that are afraid to speak up, and a majority that will just ignore the fact that racism is a thing on this campus,” Safie said. “There are definitely more people trying to speak up now and support systems that are there for the students and I have noticed that more organizations have been reaching out to get diversity workshops, which is good.”

Senior Abdullah Kamal, an international student from Pakistan, believes that one of the reasons for disconnect on Elon’s campus is the small size of non-majority groups.

“I understand that Elon has been working on increasing diversity on campus trying to triple international students. However, Elon as a whole has a lot more work to do before it can accommodate such an increase within a group that requires more to adjust than majority students,” Kamal said.

Vice president of the Black Student Union (BSU) and sophomore Arianne Payne believes some of the disconnect comes from the majority population on campus and even some faculty and staff.

Payne also believes that it is not just an issue within the student body, but that there are faculty and staff disconnections as well.

“There are some faculty and staff that have reputations for being racially insensitive or not handling certain situations in the best way,” Payne said. “I do think Elon has definitely addressed this problem and understands that there is this disconnect here, not only with students but with faculty and staff too and they are trying to bridge that gap. I just think that nothing can happen overnight, it’s a continual work in progress.”

Sophomore Tydechelle "DD" Lewis has experienced a disconnect within the classroom and even when it comes to teachers calling attendance on the first day of school.

“I think that race and background have to be considered when addressing the gap between the groups because there is so much that we as minorities go through on a daily basis that many of those in the majority do not understand,” Lewis said. “Even with my name, professors usually skip over me on the first day of class, or just say ‘wow that name is so hard, DD is so much easier, thanks.’”

Lewis has also noticed a rise in audacity on campus.

“The major change that I’ve seen is just that overall people are bold,” Lewis said. “Last year when the Confederate flag was hung in the Communications Living Learning Community, I lived in Virginia and had a direct view of the window where it was hung … I feel like people are now less afraid to voice their opinions, even if they are ignorant because that’s what the leadership in this country has led with.”

Despite events such as this, Lewis has been able to see positivity.

“I do think that every minority group on campus has become stronger within itself,” Lewis said, “because we look upon each other for comfort and love and the allies that we have that are a part of the majority are people that we trust to have a voice when we can’t speak for ourselves.”

Sophomore Diana Pinel moved to the United States from La Cieba, Hondoras before starting at Elon and describes her experience with the faculty at Elon as incredible. But she has had to correct students about misconceptions and stereotypes of Latinx people.

“I’ve had people tell me things like 'You don’t look Latina' or 'I thought you were supposed to like spicy food.' It’s as if I am supposed to fit this image they have in their heads of what they think is Latino to be able to be part of that group,” Pinel said. 'Latino people, people in general, come in all shapes and sizes and colors.'"

Pinel highlights the importance of respect, especially when it comes to learning new languages at Elon.

“I’ve overheard a handful of students that are taking their language requirement completely dismiss some things,” Pinel said. “I know you are forced to take it, but at least put some effort or respect in what you are learning. Language is part of everyone’s identity, and it is insulting when you are just dismissing it.”

“The issue is so many people come to Elon that have never met a black person in their life or have never had a black friend,” Evans said. “I can’t count the number of times I’ve heard people say ‘Oh this is my first black friend, I’ve never had any black people in my life, or minorities in general.’”

With acknowledgment that he cannot speak for everyone, Evans says that despite the natural connections he has within the black community, every organization he has been a part of wants to collaborate with others.

“It’s all about reaching out – reaching out, asking questions and being willing to actually do things,” Evans said. “We want to be able to work together. We all came to Elon. We knew what Elon was like. We knew the environment and we knew the 6-7 percent black percentage here.”

Evans also notes the importance of people who are interested in learning more about their peers to not be afraid to ask questions, attend events that BSU and NPHC sponsor and to actually listen to what is being said.

“Step outside your comfort zone,” Evans said. “Go out and do something that you wouldn’t normally see yourself doing.”

And to the people who might be pushing themselves to step outside of their comfort zone and attend events they feel curious about, sophomore Dana Harvey emphasizes the importance of respectful discussion.

“Respect is everything," Harvey said. “You can really tell when people are coming from a malicious place and when they are actually trying to learn about the subject or issue.”

Harvey also acknowledges that sometimes mistakes in word choice do happen when having these conversations.

“If [you] make a mistake racially, don’t let that be the one thing that you do,” Harvey said. "Keep going at it. Keep trying because we aren’t going to yell at you and be mad, we are just going to say this is wrong and here are ways that you can fix it. One mistake doesn’t define you.”

Payne makes it a point to acknowledge that no group of people escapes imperfection.

“I think that a lot of times majority groups in general come to the conclusion that minority groups are perfect in their advocacy and social justice, but no one is perfect,” Payne said. “No one is the perfect change agent. So what’s really important is understanding that you can say sorry because you can make mistakes in this work.”

President of the Black Student Union Derrick Luster encourages people who identify with the majority population to get involved in order to promote equality.

“It’s important to us that the majority recognizes and accepts our differences and supports our fight for equality,” Luster said. “When everyone gets involved, we all win. I know some people would feel uncomfortable feeling like the outsider at the org meeting, but there are many of us who feel like that walking to Lakeside, or in class, or at work, or in our living situations. Showing the effort to understand our issues helps inclusivity on both ends.”