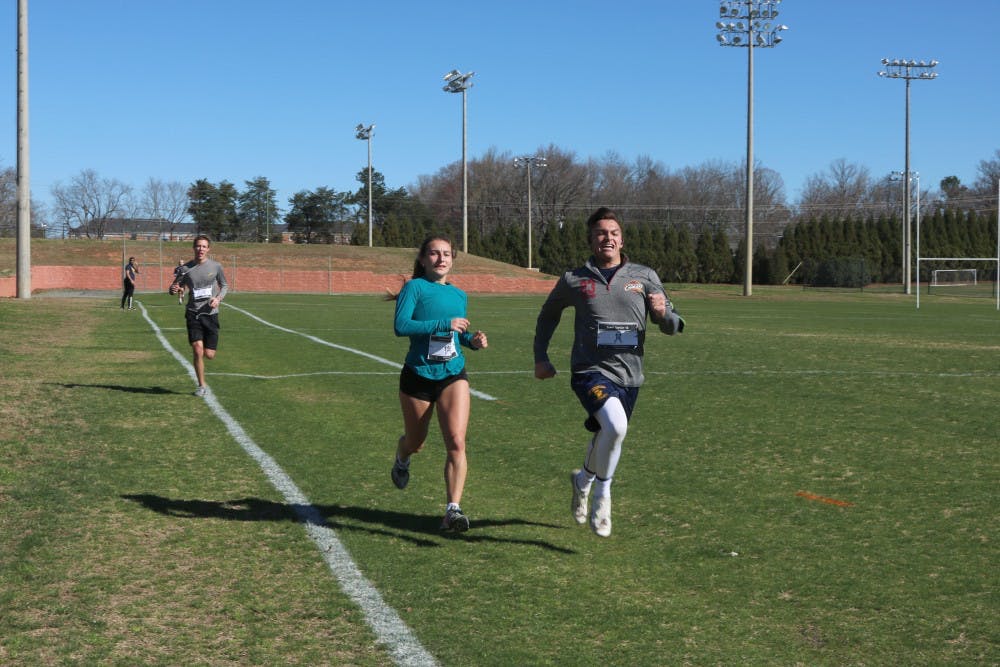 Over the past three years, Elon University has lost four students to suicide: Trent Stelter, former Alpha Kappa Psi (AKP) member and Demitri Allison in 2015, and Breslin Wiley and Harrison Durant in 2017.

On Sunday morning, March 4, 162 Elon students, faculty and staff participated in a 5K for suicide prevention hosted by the business fraternity, AKP.

This is the first year the event has been organized, but Vice President of AKP Monique Hanna is hopeful it will become an annual event.

Local businesses such as The Oak House, Food Lion and The Mission sponsored the event.

“These costs will be going toward supporting mental health, education, helping people get treatment and supporting families who’ve lost children, siblings or parents due to mental illness,” Hanna said. “Ensuring everyone has the support needed to kind of lower the incredibly high rate we’ve been seeing recently.

“One thing my president and I decided to do when we took office was show the brotherhood and the community that we are there for them,” Hanna said.

Since the students’ deaths, Elon’s administration has offered and encouraged students to attend free counseling provided by
the university.

In January, President Emeritus Leo Lambert and President Connie Book released a message informing students that a member of the Jed Foundation to prevent suicide, Nance Roy, would be visiting Elon. She was invited to campus for guidance and strategic counsel on how to better Elon’s environment.

“I think the administration has worked really hard to make sure that this part is there,” Hanna said. “I think it’s something that people do sometimes forget and something they need to be reminded of.”

Hanna believes the relevancy of suicide and mental health makes it important to raise awareness within the community in order to show support and remember those lost.

“It has become a relevant problem throughout Elon, as people have seen,” Hanna said. “I thought it was a great idea to implement the loss that we’ve faced and show the support that even however many years later we’re still loving him, we’re still missing him and to show that the community still has that support needed if necessary at any point.”

Sophomore Holly Miranda said she believes the run was important for a number of reasons, and respects AKP’s choice of philanthropy.

“A lot of us always focus on the ones we’ve lost to suicide, which is of course extremely important, and we must recognize that to reconcile this issue,” Miranda said. “But it’s also important for those who are still struggling with it and who might even be still here during the run and give them the recognition that they deserve on the side.”

Miranda hopes to see events such as this continue from AKP and thinks that raising awareness is just as important as prevention itself.

“I do have several connections to people that have struggled with suicidal ideation, which is just as deadly,” Miranda said.

Freshman Griffin Barriss has felt how suicide can affect a community in both his high school and college communities.

“When I was a [high school] junior, a person who was a grade above me committed suicide on train tracks, which kind of shook our community,” Barriss said.

“Mental health and suicide awareness is really important in today’s climate both politically and socially,” Barriss said. “Especially with the recent events at Elon and events back in my home town, I think it’s really good to raise awareness of this.”

Betsy Rhodes, head of the North Carolina Chapter of the American Foundation for Suicide Prevention (AFSP), gave a speech on suicide prevention and awareness before she counted down the start of the race.

In 2003, Rhodes lost her eldest son to suicide. She said what she learned from that experience equipped her to better recognize and treat her youngest son when he began to show symptoms
of depression.

“I did what I did then with what I knew then,” Rhodes said. “When I knew better I did better.”

Rhodes’ youngest son is currently a marine, an EMT and a firefighter. She said she strongly believes her son holding these positions while battling with depression shows that even men with stereotypical masculine positions can still suffer from mental health, combating the anti-masculinity stigmas surrounding discussing mental illnesses.

According to the AFSP, suicide is the 10th leading cause of death in the United States. Specifically, white males accounted for seven out of every 10 suicides in 2016.

Rhodes understands raising awareness and removing the taboo label of discussing suicide and mental health is key to suicide
prevention.