The story behind the jumps and turns 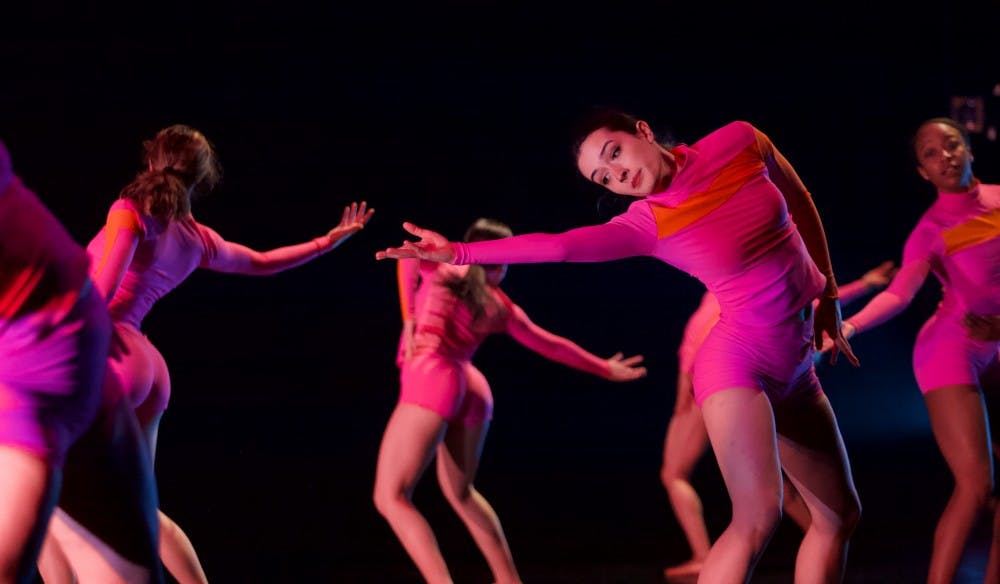 Performer Alexandra Fund reaches out toward another dancer performing the piece Paiju.

The velvet red curtain opens to reveal an empty black stage. There’s complete silence. A few seconds pass and a light beams from above on to a single dancer draped in royal blue, with mysterious fog lingering in the background. Senior Abby Corrigan lifts her head and stares into the audience. This is "Echoes".

“This show is particularly meaningful to me because it’s the last time I will be performing on stage at Elon,” Corrigan said. “I feel as if I am leaving my time here by doing three incredibly thought-provoking works that the audience will surely enjoy.”

"Echoes" featured original modern choreography from Elon faculty performed by the B.F.A. Dance majors. For Corrigan and other dancers in the show, the choreography is more than leaps, jumps and turns.

“Dance is not just aesthetically pleasing and pretty to watch, but incredibly impactful and a meaningful method of communication,” she said. “Each of these pieces impacts the audience in a different way so that they will leave the theater not just feeling entertained, but also changed.”

Behind the intricate costumes, stunning lights and captivating moves of each piece is a story. Dancers like sophomore Max O’Connell find that communicating the story is harder than anything else.

“We have to describe a storyline through a set of movement and that’s definitely the hardest part for me aside from the athletic stuff, the jumps and turns,” he said. “It’s really finding that humanistic thing without using any words.”

And for some dancers in "Echoes," like senior Julia Goldberg, the humanity resonates with them deeply.

“I portray the role of someone who is in a room full of people, but still feels alone,” she said. “I especially connect to this at the end of the piece when the other dancers have stopped moving and I am dancing alone. I truly feel that I can tell the story in this moment.”

Each of the seven pieces in the show has its own message. Junior Lindsey Bischel performs in the piece "Paiju." The piece is named after the town before Mount Everest telling the story of struggle, which everyone on and off the stage can resonate with.

“From an emotional portrayal of the story, trying to move past something has its own impact on every dancer,” she said.

Out of the seven pieces in the show, five were choreographed by Elon faculty. One was choreographed by dancers in the Summation Dance Company, a New York City-based company, and the other by dance legend Anna Sokolow.

Late modern dancer and 20th century choreographer Anna Sokolow created "Three Pieces " for a concert in New York in 1990. But the piece was never performed – until now. Junior dance major Brennan Kolbo says that Elon will be making history with this piece.

“It is one of the greatest opportunities that Elon has brought in for us because this piece has never been caught on film as a performance,” she said. “It’s going to be in the Library of Congress after this. It’s quite a big deal that we from Elon, North Carolina are going to be set in history with the piece.”

What goes into the making of a show

Behind the seemingly effortless turns and balances are hours of intense dedication. Preparation for the spring concert began back in the fall with auditions. And the cast hasn’t stopped working since.

“All rehearsals were over winter term so I was in rehearsal from nine or eight in the morning until five or six at night every day of j-term whereas other people were just in class,” Kolbo said.

And the week leading up the show, the dancers were in technical rehearsal every single night. Goldberg says the preparation is not finished after the curtain closes at the end of rehearsal.

“Outside of rehearsals, we prepare by continuing to train in class and through cross-training,” she said. “Before each dress rehearsal and show, I lead company warm-up to ensure that our bodies and minds are prepped for the stage.”

Despite all of their hard work, some dancers feel the arts are unappreciated.

“Sometimes when you say things like, ‘oh I’m a dance major,’ people don’t really know what that means,” Bischel said.

But this show echoed to other parts of campus. The last piece required more men than what was in the program. Members of the cast had to recruit musical theatre majors, their costume designer, their set designer and other unfamiliar faces.

“They’re just people from around campus who were interested in stepping outside their comfort zones,” Kolbo said. "I think they’re both business majors that have trained and really stepped it up and become part of the company and blend in just as well as the other dancers.”

Through all the time spent together in rehearsals, the dancers in the show find a family in each other. When it comes down to it, dance is a team sport and the bond created on stage is like no other. While Corrigan is finishing her last show, some are just beginning their careers on the Elon stage. First-year Jenna Kulacz is one of them.

“It is really important to me to give each and every performance my all, as this is one of the first impressions I will be making at this school,” she said.

Some other dancers finds themselves in a unique situation. Kolbo is nostalgic about her older friends leaving, but excited for what the future of the program brings.

“I get to share the stage one last time with the seniors and then bring in a few of the freshmen this year,” said Kolbo. “We’re really building a family onstage and being able to help train the younger dancers into what I see the senior dancers as is something that has been really exciting to see.”