Elon blows out JMU by 23 points in semifinals 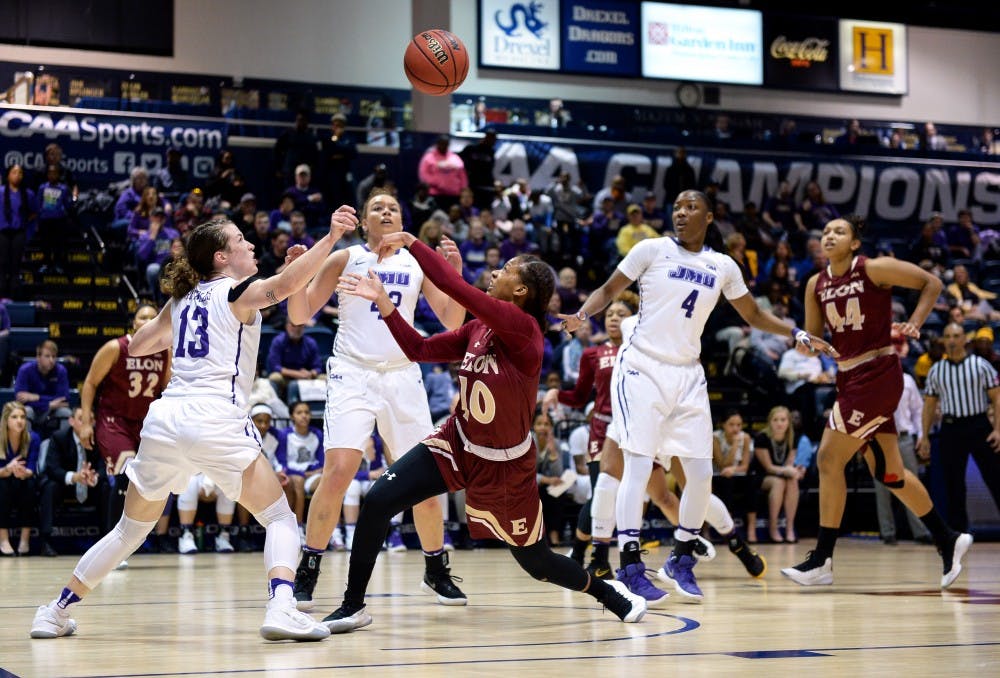 PHILADELPHIA – What looked like a totally different team from yesterday, the Elon University women’s basketball team came out red hot against the James Madison University Dukes in the Colonial Athletic Association semifinals matchup, cruising to a 76-53 victory.

“I am incredibly proud of our team and the way we performed today. It was an amazing performance to watch,” said Elon head coach Charlotte Smith. “We went into this game with a lot of confidence, shot the ball well and we defended really well.”

Defense was key to Elon’s success in the game. After shooting 73 percent from the field in the second quarter and taking a commanding 17-point lead into the half, it was up to the Phoenix to control JMU and not let the game slip.

“At halftime, we told them that the score was 0-0,” Smith said. “Don’t pay attention to what we did in the first half. We have to lock in and play smart and play responsible in the second half.”

The Phoenix held the Dukes to 23 percent shooting in the first quarter and 39 percent in the second, including scoring droughts of five and three minutes for James Madison, causing only 25 points to show on the scoreboard.

“We played behind, and it also made our offense a little frantic,” JMU head coach Sean O’Regan said. “I think I didn’t have them well enough prepared to come out and play that kind of game.”

Elon sophomore guard Lexi Mercer said that they felt the opposite.

“In shoot around today, we went over their offenses and the coaches really prepare us for what to expect when we’re out there on the court,” she said. “It was more anticipating than waiting to see what they do and I think we all knew our scout really well and … we were relentless.

“I have to take my hat off to you for the amazing job you did against Smalls,” Smith said. “We were just very disruptive and I’m just proud of our all around effort today.”

Elon enters tomorrow’s championship game against Drexel University with a team of six freshmen, looking to capture its second-straight title. According to Smith, this is not something the team has discussed.

“I told them in the beginning of the season that this team didn’t win it,” she said. “Understanding that this team is a whole different team than last year’s team. We just talked about being the best version of who we are right now and trying to get better each day.”

Capturing its 12th-straight win and fifth-straight CAA tournament win of more than 15 points, the Phoenix shows no signs of stopping. Tip off against the Dragons is set for 1 p.m. tomorrow in Drexel’s home gym.

“It has to be a dogfight,” Smith said about tomorrow’s game. “They’re gritty and get after it for 40 minutes. Our motto is EPM – every possession matters. We’re going to have to fight every single possession.”