Stars align for the final scheduled game in Alumni Gym, as Burnett gets second triple-double 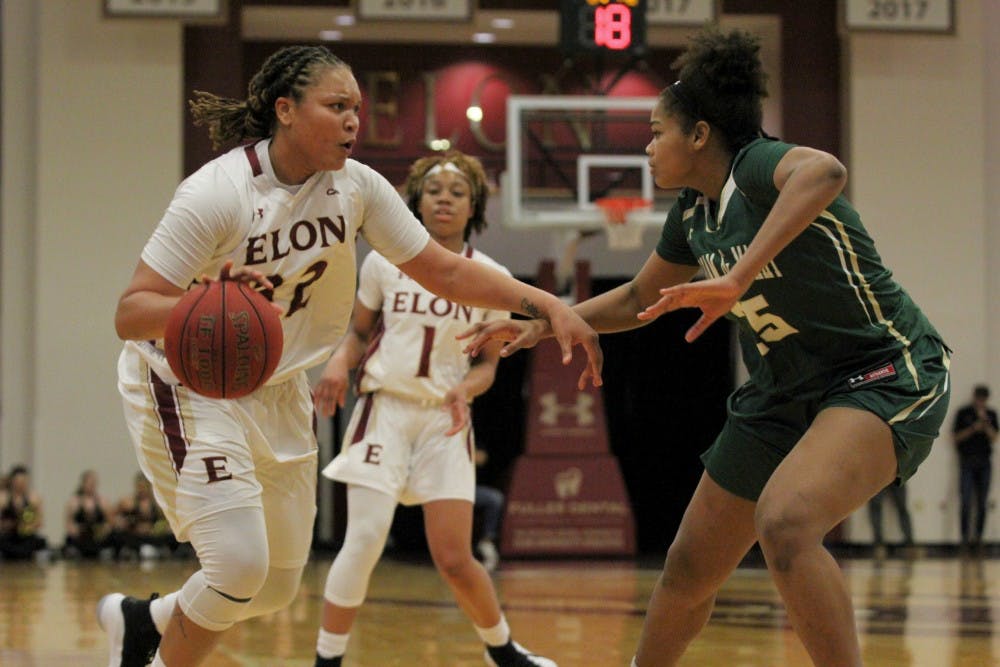 
Phoenix defending their undefeated title during their last game

It was the last game in Alumni Gym for the Elon University women's basketball team, and they went out with a bang.  The Phoenix defeated the Tribe by 21 points, 82-61, getting redemption from its last game against William & Mary Jan. 20.  This game makes the team's ninth- straight win — and its 18th-consecutive win in Alumni Gym — leaving the Phoenix undefeated this season on their home court.

"What a fantastic way to end our season in Alumni Gym," head coach Charlotte Smith said.  "I’m so proud of this team. Just an incredible season to be undefeated. That was one of our goals at the beginning of the season was to represent our university and represent our team. We knew that we had the final game in Alumni Gym and we wanted to make this season a special season at home."

Being the last scheduled game inside the hallowed walls and President Connie Ledoux Book's first official game to attend, the night was set up perfectly for another Phoenix win.

"The atmosphere, the president’s first day … it’s just great," Smith said. "You can’t ask for the stars to align any perfectly tonight."

Align, they did. Senior guard Shay Burnett capped off her career in Alumni Gym with a triple-double, her second of the year and the second in school history. Her 13 points, 10 rebounds and 14 assists helped propel the Phoenix to victory and left her baffled.

"I mean, wow. I’m speechless honestly," Burnett said. "It seemed like they were making everything in the end except that last shot. Like coach said, the stars couldn’t line up more perfectly. The seniors went out with a bang. The whole team went out with a bang.  For the last game for the seniors in Alumni or at Elon, Meme started off hot, then Malaya got hot.  It was just a great night overall for our team."

"I honestly think I just went out there playing and if I had a shot open, coach always tells me to take it. But if not, then I can get the next one," senior forward Meme Garner said. "I wasn’t thinking so much about the last home game here, but I’m glad that I played well today, too.  So people can say ‘Alright, Meme went out with a bang on her last game.'"

Garner led Elon in points, tallying 15 on the night, going 6-10 from the floor. Smith was quick to praise her.

Under Smith, the Elon women's basketball team is now 21-7 (13-4 in the Colonial Athletic Association) on the year, sitting at third place in the CAA behind Drexel University and James Madison University. The Phoenix will play its final game of the regular season March 3 at the University of North Carolina at Wilmington before heading to the CAA Tournament in Philadelphia next week.

"We need to forget everything that we’ve done, and focus forward because you don’t want to have any slippage at this point," Smith said. UNCW can be a dangerous team. They can be a hungry team because they haven’t won that many games. We have to go in and approach that game as if they are the number one team in the conference and finish the job."

Burnett stays confident in the team's ability to do that, and more.