It's time to right the ship that is Elon men's basketball 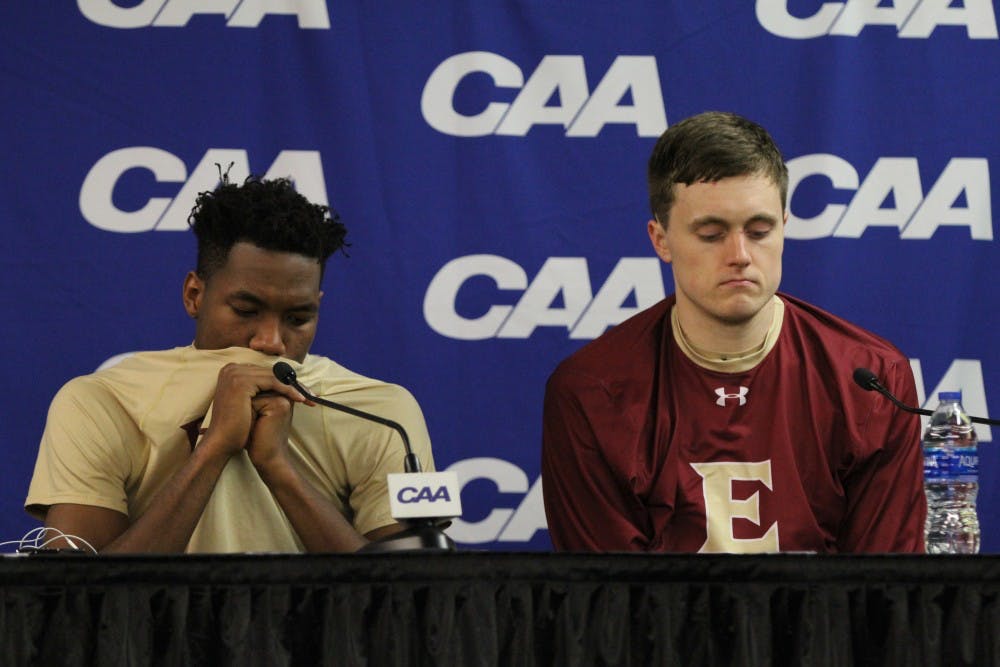 After losing the final seven games of the season and bowing out of the Colonial Athletic Association tournament in 40 minutes, the Elon University men’s basketball team is left wondering what happened.

Picked to finish third in the league and having all starters return from last year, it seemed impossible for the Phoenix to finish at the bottom of the league. But after a seven-point loss to the University of Delaware March 3, that’s exactly what happened.

With the end of the season came some changes to the roster. Five seniors have played their final game, the most notable being guard Dmitri Thompson and forward Brian Dawkins. Thompson put up 27 points in his final game wearing maroon and gold, finishing the year with an average of 12.3 points per game, the second highest for Elon players. Dawkins, adding an average of 12 points per game, was the Phoenix’s third-highest scorer.

Replacing them, and the other three seniors, is going to be a challenge. For the team to be successful, the large five-person junior class is going to have to step up, which has been a struggle lately.

Junior forward Tyler Seibring has proven time and time again that he can score points under pressure. He played 85 percent of the available minutes this season and ranked first in Phoenix scorers, averaging 15.4 points per game.

That is not the case for junior guard Dainan Swoope, who posted a total of 13 points in the final four games of the season. During his roller coaster of a season, Swoope could post no points one game and more than 20 the next. Struggling for consistency, Swoope went 1-11 in the CAA Tournament, sitting for the final minutes in hopes somebody else could connect on a shot.

When things started to go wrong, you could count on junior guard Steven Santa Ana to show his temper. Not afraid to speak his mind, the Charlotte native almost got into a fight during the CAA tournament and has been received technical fouls a couple of times this season. Maintaining his composure would go a long way for the attitude of the team.

If the juniors aren’t asked to step up, a change in attitude might start at the top. Finishing his ninth season as head coach, Matt Matheny matched his worst CAA record since joining the league four seasons ago in 2014-2015. During this season, the Phoenix also went 6-12. Elon posted a 14-18 record this year, the fewest number of wins since Matheny’s second season at the helm.

According to Elon’s 990 tax form, Matheny earned $288,622 in 2015, the ninth-highest salary of an Elon employee at the time. He earned slightly more than that this season, which ended on a never-ending skid of losses, and fans are left wondering if Matheny is worth his price tag.

Whether it’s time for the junior class to step up in its final year, or time for a change in leadership, a righting of the ship must take place. In order to have a fresh start in a new building as the Phoenix move into the new Schar Center across campus.