Back on top: Phoenix dancing again

How Elon captured another CAA title with a new team 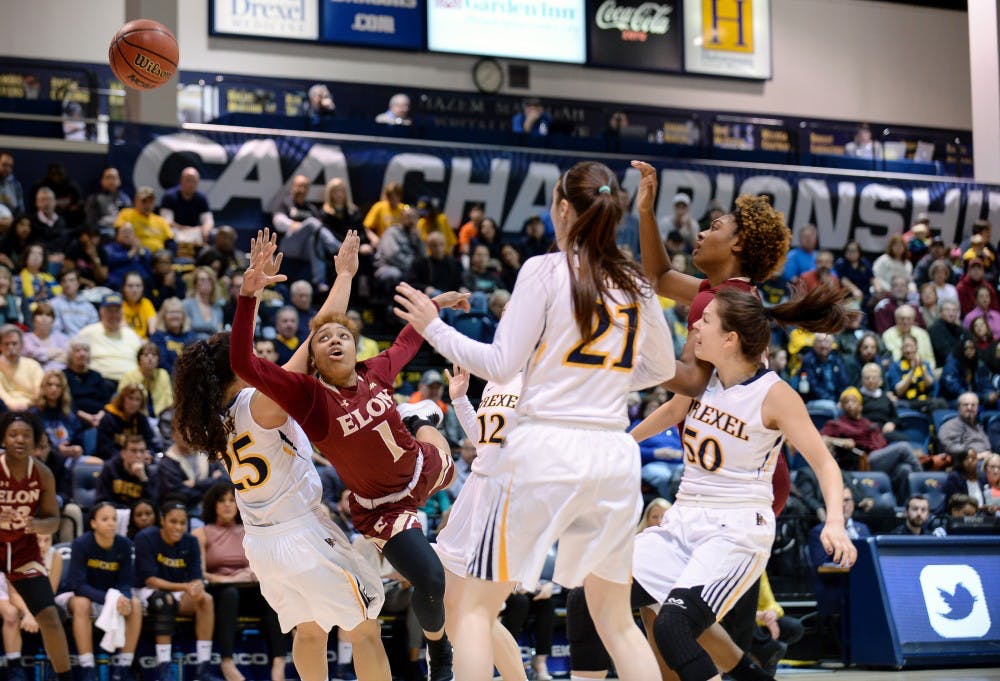 
Elon freshman guard Saadia Munford drives through the lane against Drexel's senior forward Kelsi Lidge during the first half of the CAA title game March 10.

Punching a ticket to the Big Dance is the goal of every Division I college basketball team at the start of the year. Elon University is no different.

After coming off its first appearance in the NCAA Tournament last year, the fate of this year’s team was uncertain. Replacing half the squad with freshmen, there was no telling if this would be a make or break year.

But after claiming its second-straight Colonial Athletic Association (CAA) title March 10 in Philadelphia, head coach Charlotte Smith and her team are dancing once again, receiving an automatic bid into the tournament.

Ranked sixth youngest in the country, Elon’s roster is composed of 75 percent underclassmen. With no juniors and three seniors, the veteran coach has had her fair set of challenges training the new players.

With a new team to teach, Smith says the freshmen class put in the extra effort to get up to championship caliber.

“They were hungry,” she said. “They came in to watch film, they came in to get extra shots – they did whatever they could to become great practice players to push these seniors to be better. Then, along the way, they figured it out. They figured out the system and did a really great job down the stretch.”

Munford helped the team the most, contributing an average of 6.6 points per game and playing the third-most minutes of any Phoenix player. She proved pivotal in the CAA Championship game, finishing the day with 13 points.

“I’m just incredibly proud of our freshmen in helping us, pushing us, to where we are now,” Smith said.

A second CAA title would not have been possible if Elon didn’t move up to the higher conference four seasons ago.

“I was excited,” Smith said, reflecting on when she found out about the move. “We had a meeting with the university, with the administration, and I was one of the ones that stood up in front of everybody, the president saying this is a great opportunity – a great move to play in a great conference.”

Members of the Southern Conference from 2003-2014, Elon decided to make the jump to the higher-ranked CAA, something that Smith said was a great decision for the school.

“We have great coaches in this league, great camaraderie and it’s competitive – I love it,” she said. “It’s competitive night in and night out, and we get a chance to travel to great cities like Philadelphia and like Boston. So it’s really neat to be a part of the CAA.”

In Elon’s inaugural season in the league, Smith led the Phoenix to a 19-13 (11-7) record, narrowly missing out on the CAA title game, but receiving the Phoenix’s first-ever Women’s National Invitation Tournament bid.

With another CAA title on March 10, Smith continues to add to her already impressive resume.

The most decorated player at the University of North Carolina at Chapel Hill, the former star hit the game-winning shot in the 1994 National Championship. But Smith has proved that she can coach as well as she could play.

She was the assistant coach at UNC from 2002-2011 before being named Elon’s sixth head coach of women’s basketball. Under Smith’s leadership, Elon has posted a record of 139-84, including an impressive 76-20 overall record on their home court after going undefeated in Alumni Gym this season.

Smith was named the CAA Coach of the Year last season after guiding the Phoenix to its first-ever NCAA tournament bid. With another trip to the Big Dance coming shortly, it’s time for Elon to reflect on the trip it made last year if it wants to make it past the first-round game.

Falling in the first round of the tournament last year to West Virginia University 62-75, senior center and captain Malaya Johnson said that familiarity will help Elon this year.

“I feel like we learned a lot from our experience last year,” Johnson said. “We lost some people, but this is a whole new group. We have a whole new mindset and a whole new fire under us.”

“We have to come in with a mindset that we’re not just there to participate, that we’re there to win and we have the tools,” Smith said.

To do that, the coach will reflect on the games from the beginning of the season.

“We played a great nonconference schedule,” Smith said. “We got some good wins under our belt. I’ll go back and look at our nonconferece schedule and say this is who we played. Like Alabama beat Tennessee – well we beat Alabama. So we just have to go in with a mindset that anything can happen, play our best basketball and be there for the long haul.”

The No. 13-seeded Phoenix will face No. 4 North Carolina State University in a rematch of an earlier game this season at 2:30 p.m. on March 16 in the first round of the NCAA Tournament. The Phoenix fell in the first matchup 57-70.

See more of our coverage of the Phoenix's championship run:

Thursday: Elon defeats the College William & Mary in the quarterfinals thanks to veteran leadership.