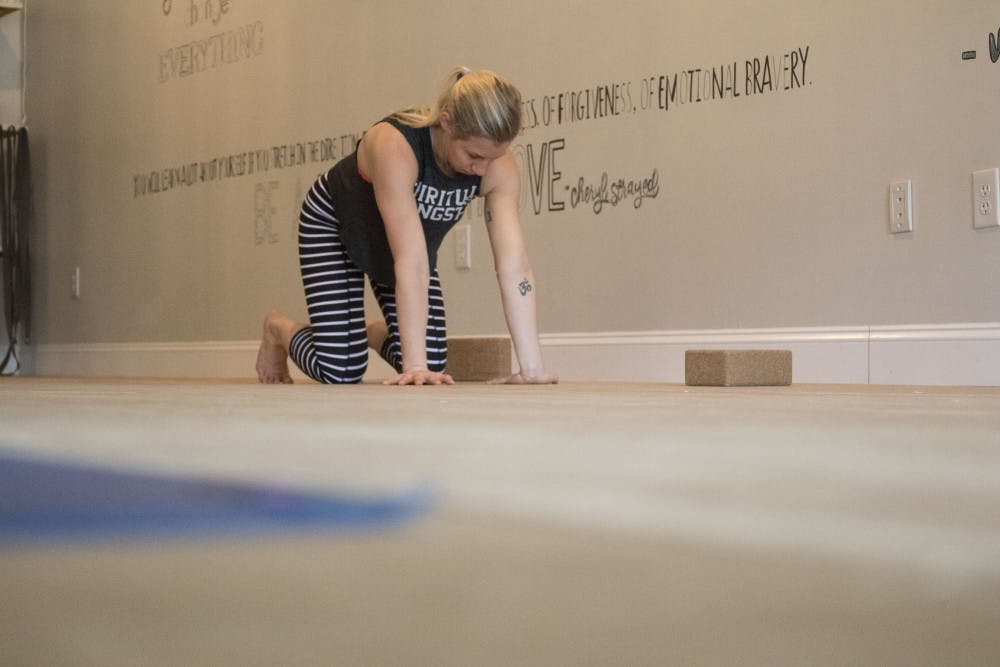 The free yoga for first responders class at Feel Better Burlington Yoga ends each session with a simple head bow and an exchange of “namastes”— an acknowledgment of the light in each and every person in the room.

Every Saturday from 12:00pm to 1:00pm, a unique group gathers in this hot yoga studio in downtown Burlington to sweat out the stress of the week. This group faces a particularly unique set of challenges and stresses through their weeks. Everyone in the room is, or is married to, a first responder.

The concept of yoga for first responders is not unique to Burlington. In 26 locations across North America, the organization Yoga for First Responders (YFFR) offers community classes and trainings.

Olivia Kvitne, a journalist and yoga instructor, created the program to bring yoga philosophy to practical applications for first responders around the country. The movement started with the Los Angeles Fire and Police Departments and has now moved to locations like Ontario, Kansas, and Ohio. The group trains teachers and psychologists to manage stress and enhance resiliency.

Brian Leventhal, a state trooper with the highway patrol, attends the first responders’ yoga class at Feel Better Burlington every Saturday. He has worked in law enforcement for 18 years. When he was younger, Brian was chasing something fun and exciting, but as he and his career mellowed out, he now serves as part of the collision reconstruction special investigative unit— a position that requires work both in the office and in the field.

In a typical day, Brian can expect to be at his desk writing reports one minute and out in the field conducting interviews, looking at crash scenes and vehicles and talking to people in an effort to piece together what took place to cause a crash the next minute.

“It’s a little bit of a mix,” Brian said. “You get the typical stresses of being in the office and sitting at a desk all day combined with the stresses of going out into the field. While working on the road, we’re still in a marked car, and, if we happen to be close to a situation, we have to respond.”

While Brian stays active through running, swimming and weight-lifting, he says before he started practicing yoga it could be hard to deal with the stresses of his job and achieve mental clarity.

Yoga’s benefits are not exclusive to a specific group, but it can be especially beneficial for those in high-stress work environments— such as first responders— particularly when it comes to building mental clarity. When someone’s life is on the line, first responders have to be able to think clearly and quickly.

“Mental clarity is important for anybody, but for first responders, it is important to be aware of the situations you’re in and be aware of what’s going on around you," Brian said. "You have to look out for your safety and the safety of others."

Brian’s wife, Erin Leventhal, first told him about the new class being offered for free to first responders. Erin had been attending yoga classes for almost a year when she was told about the new class. The couple worked around their schedule so that Brian could attend the class, and he has been going ever since.

“Brian and I have both noticed that, since we’ve both been taking yoga, the whole household is calmer," Erin said. "The stress level in our house has really gone down.  Brian has become more calm and more patient. I think that breath is everything, so taking a minute to breathe before you respond has been really big for us.”

Even Erin, a speech and language pathologist at South Mebane Elementary, has learned how to better deal with stress and apply techniques such as breathing to her classroom.

“Brian and I are both just able to deal with stress better, so we can breathe when things get a little tough," Erin said.  "We both feel calmer so the stress level isn’t quite as high as it usually is.  We’ve realized that we need to take time for ourselves, so just having that self-care time is really important and it’s always been a big thing for us.”

Erin is no stranger to the challenges that first responders face. Her father was a firefighter, so she grew up in a first responder household and understands the stress that the job can put on a family.

“Just the idea of being able to come in here together and breathe and feel like we have that time to let everything go and just kind of be our true selves has been really important,” Erin said.

By offering not only physical and mental support but providing first responders, like Brian, with a community of people with shared experiences, interests and stories, the concept of yoga geared toward first responders has, Brian says, benefitted many in the community.

“It was really cool to see the room full of people who devote their lives to other people,” Erin said.  “I think this class is a great opportunity because their jobs are super stressful and it gives them the opportunity to relax and let go for an hour.”