Empowering untapped genders in the workforce 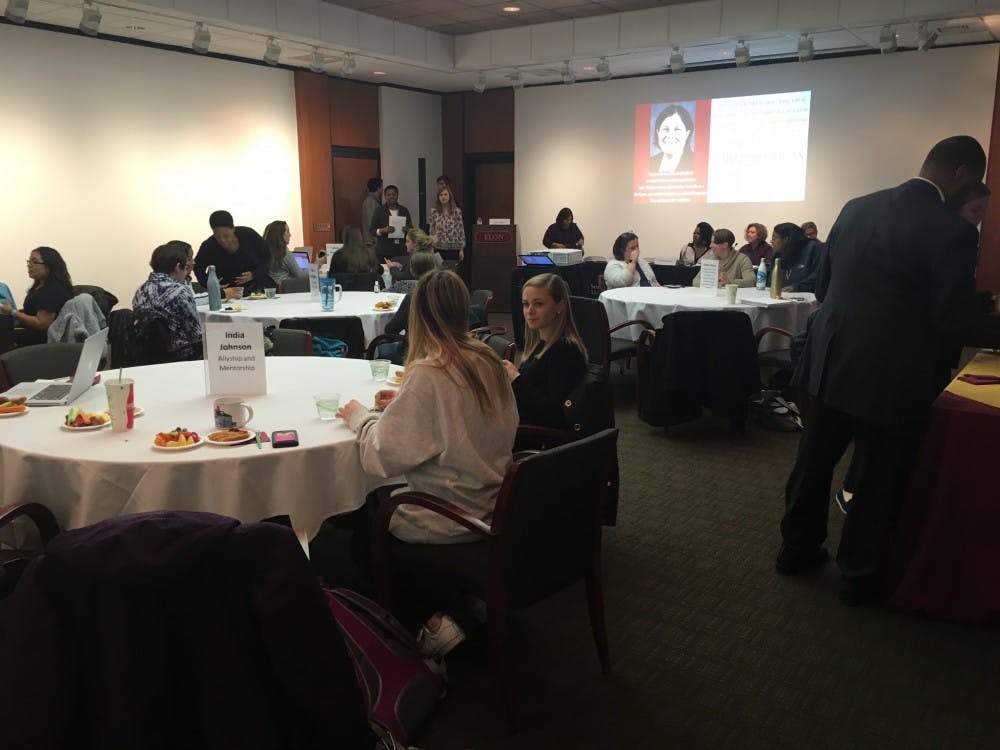 Mary Morison, the assistant dean of campus life, says she believes there are all kinds of people in this world and there is something you can learn from all of them. She believes we should look to people of different ages, backgrounds and identities to inspire change — no one is off the table.

Five panelists joined a group of Elon students, faculty and staff on Tuesday night in the Center for the Arts to discuss why all genders work in a panel to empower untapped genders in the workforce.

“We never forget that we have several identities, and they follow you wherever you go,” Bravo said.

Bravo identified herself as a woman who is Latina, Costa Rican and a speaker of English as a second-language in the workplace.

She is the only Latina faculty member in the school of communications. “Being one out of 60 -something just doesn’t add up. We need to be better at attracting more.”

Bravo isn’t the only panelist who felt like an outlier in the workplace because of her identity.

India Johnson said having different identities can be isolating, especially at Elon.

“I’m challenged because I am a female, and I am a person of color,” Johnson said.

Kristin Ringelberg said it can be easier to show her true identity to her students than to her colleagues.

Each panelist deals with the marginalization they’ve faced in different ways.

Alexa Broderick’s parents always told her that, growing up as a black woman, she has to be twice as good to get half as much.

“You have to operate with a keen awareness that folks in the group not being marginalized don’t have to,” Broderick said. “You need to know the rules and get good at the rules to change the rules.”

Broderick says when she walks into an uncomfortable space she thinks ‘how would a white man handle this situation?’

“There is something about the confidence that white males walk in with that makes them feel like they belong and are in control,” said Broderick. “Well I belong too. I belong here. This is my table.”

After the panel, moderated by associate director of human resources Carla Ugboro, each panelist met with a sub-group of attendees about a specific topic. Johnson talked about mentorship, Bravo about the ups and downs of being a Latino, Costa Rican or a speaker of English as a second language in the workplace, Ringelberg about coming out as a member of the LGBTQIA community at work, Broderick about intersectionality and understanding your experience through multiple lenses of your identity, and Morison about how to handle your first job.

Though each panelist has different experiences with their gender and identity in the workplace, they all reached a similar conclusion: their gender works.