Torchiana encourages students to "love yourself and support one another" 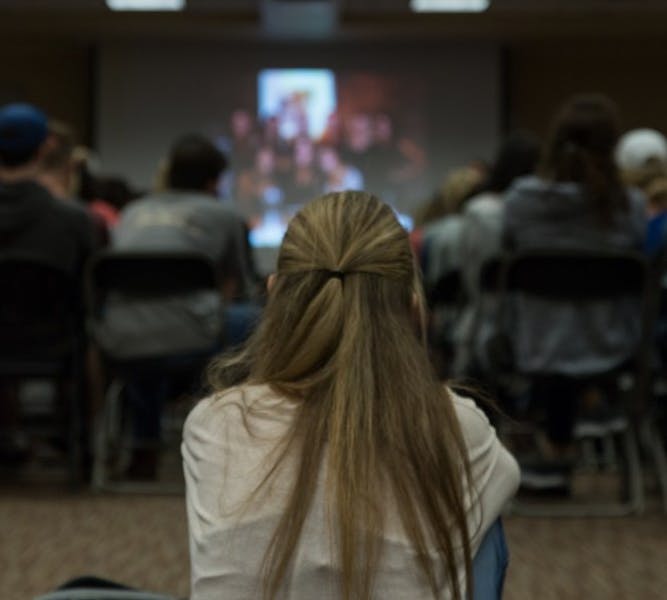 Students filled Oaks 212 on Thursday evening to join the discussion on a topic that has touched many across Elon’s campus: mental illness.

Emily Torchiana, founder and president of The Invisible Illnesses, a non-profit organization that advocates for recognizing mental illness, reminded students they are not alone and shared her personal struggles.

Two weeks before moving into her dorm room at the College of Charleston, she had been in an even smaller room in the psychiatric unit of a hospital after attempting to take her own life. It was not until she was admitted and surrounded by other young people struggling with mental illness that she realized she was not alone.

“That was the first time I realized…other people do struggle, but because of the mental health stigma, no one wants to talk about it,” Torchiana said.

Torchiana spoke about a mask that she wore to hide what she was really feeling. It is the same mask that many still wear today to conceal the imperfections in their lives.

“Everyone in this room has a story whether it has to do with mental illness or not, and that’s really the theme for today,” Torchiana said.

“This is a topic, mental health and wellbeing, that we need to continue and talk about regularly,” Gregory said. “It can’t just be a one-time conversation. It can’t be just bringing in one speaker. We have to life this up for our students, our faculty, our staff to talk about regularly.”

The event, Love Yourself & Support Each Other, was co-hosted by Active Minds and Alpha Omicron Pi.

Alpha Omicron Pi’s vice president of philanthropy Catherine O’Reilly believed that Torchiana would be an ideal person to speak to the community because college students would relate to her. Torchiana graduated only a year ago from the College of Charleston, and ever since has spoken candidly about mental illness.

Co-president of Active Minds Kacie Lynch believes that it is possible to change the stigma surrounding mental health on Elon’s campus.

Leah Herman, co-president of Active Minds, shared the many resources available for people who are struggling, including Elon’s Counseling Center, suicide hotline, and organizations like Active Minds that focus on raising awareness about mental health.

Torchiana travels around the country to share her story with others and spark such an important conversation. The Invisible Illnesses shares stories from those who have struggled with mental illness or suicide, with the hope of helping someone currently fighting a similar battle. More information about the non-profit organization can be found here: https://www.theinvisibleillnesses.org/about-us