This Friday at 10 p.m. in Danieley PARC, there will be a benefit concert to raise funds for the people of the Caribbean Islands. The entry fee is $5. 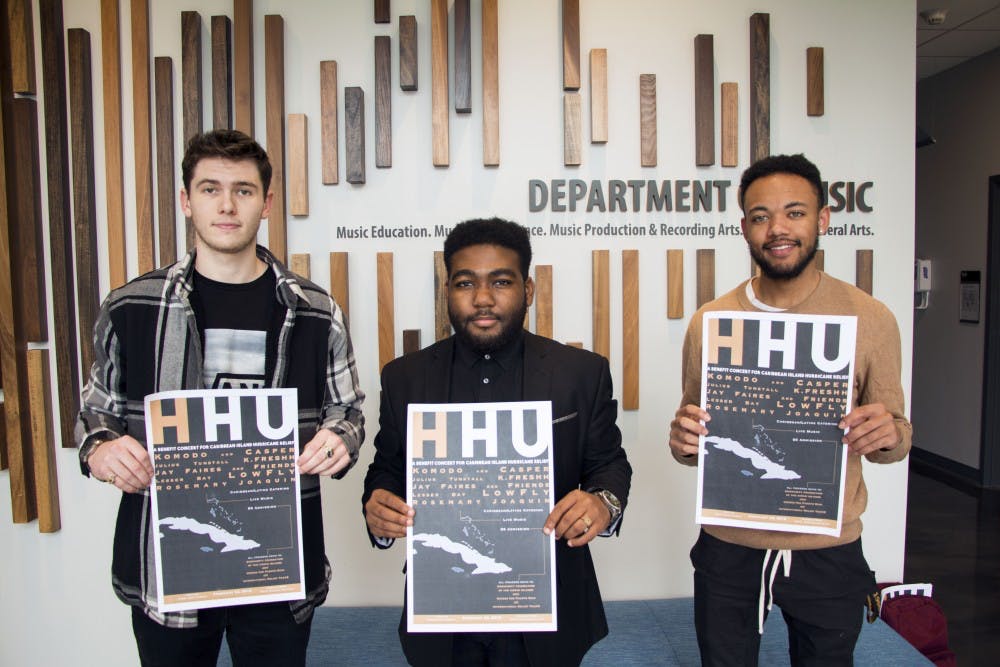 Left to right: Casper (Connor Smith, senior), Kellcee Batchelor (senior), and Komodo (William Henderson, senior), who will all be performing on Friday. Photo by Chaselyn Palumbo.

Elon University students, faculty and alumni are working together to put on a high production value show to benefit those whose homes were destroyed during Hurricanes Irma and Maria.

Helping Hands United: A Benefit Concert for Caribbean Island Hurricane Relief will take place at 10 p.m. Friday, Feb. 23, in the Phoenix Activity and Recreation Center in the Danieley Neighborhood. The cost is $5.

“All proceeds from the concert will be going to three organizations: International Relief Teams, the Community Foundation for the Virgin Islands, and Unidos por Puerto Rico,” said Sylvia Munoz, the associate director for the Center for Race, Ethnicity and Diversity Education. “No artists or anyone involved will be taking a commission, and 100 percent of the proceeds raised will be going straight to these organizations.”

This concert is the brainchild of senior music production and recording arts major Kellcee Batchelor.

Batchelor was first inspired to organize the concert after fall break last October, a little while after the hurricanes passed through the Caribbean Islands.

“I feel like a lot of the times we get paralyzed by fear,” Batchelor said. “We get paralyzed by all of the destruction that we see. It’s OK to feel those emotions ... but at some point we have to be mobilizers. I really hope this event stands as a cure to that paralysis.”

When the idea was conceived, Batchelor’s big goal was to make this event truly diverse and highly collaborative. He has been working with 15 campus organizations to coordinate the show.

“A lot of student-run and faculty-run groups are all supporting it,” said Julio Dragonetti, a senior who will be performing in the show with his band, LowFly. “It’s a really diverse group, especially for this campus ... a lot of the minority fraternities and the Latnix groups are really chipping in for this because those are a lot of the cultures that are affected in the Caribbean Islands.”

Another big goal of Batchelor's was to create a cultural experience for the students in attendance.

“A lot of the students who are a part of the Latino and Hispanic Union, they’ve agreed to make dishes,” Batchelor said. “They’re making homemade dishes and then Aramark donated all of the food, and it’s going to be Caribbean-style catered food.”

Along with the food and sponsors, the music will also be exemplary of culture. The show will feature seven acts consisting of local artists, Elon alum and current Elon students, including Batchelor himself, whose stage name is K.FRESHH.

“The music is very diverse as well,” Batchelor said. “Everything from pop, to hip-hop, to EDM, to funk, to rock — there’s a little in there for everybody. So not only is the show itself diverse in terms of acts and people performing, but even down to the sponsors who are helping partner with us.”

“He didn’t want this to be only his event,” said senior Andres Garreaud, who helped Batchelor plan the event in its initial phases. “He wanted to have a collaborated effort across many different organizations to show that Elon can come together, like it does for ElonTHON, to support communities in need and be the change we want to see in the world.”

Partner organizations are helping set up, usher, cater, ensure security, advertise and promote the event. Cultural groups on campus such as El Centro and the Caribbean Student Association “have helped from a cultural standpoint,” according to Batchelor, to nail the promotion aspects and appeal to all students.

Limelight Records and SGA have provided the funding for the event. SGA has taken on costs for safety measures while Limelight is covering the cost of the lighting and assisting with the stage management of the event to ensure it is run seamlessly and professionally.

“The production company that did Jon Bellion is doing this,” said junior Josh Scovern, a music production and recording arts major who will be helping mix the audio. “It’s going to be huge.”

Batchelor said he hopes to attract a large, diverse audience for this special, collaborative event. He also hopes it inspires others to take action geared toward the betterment of society.

“At Elon, we talk a lot about being global citizens,” Batchelor said. “Be global thinkers, be global citizens ... I think we really need to be as altruistic as possible, be as selfless as possible. If you combine selflessness with optimism, you can do a lot of great things.”