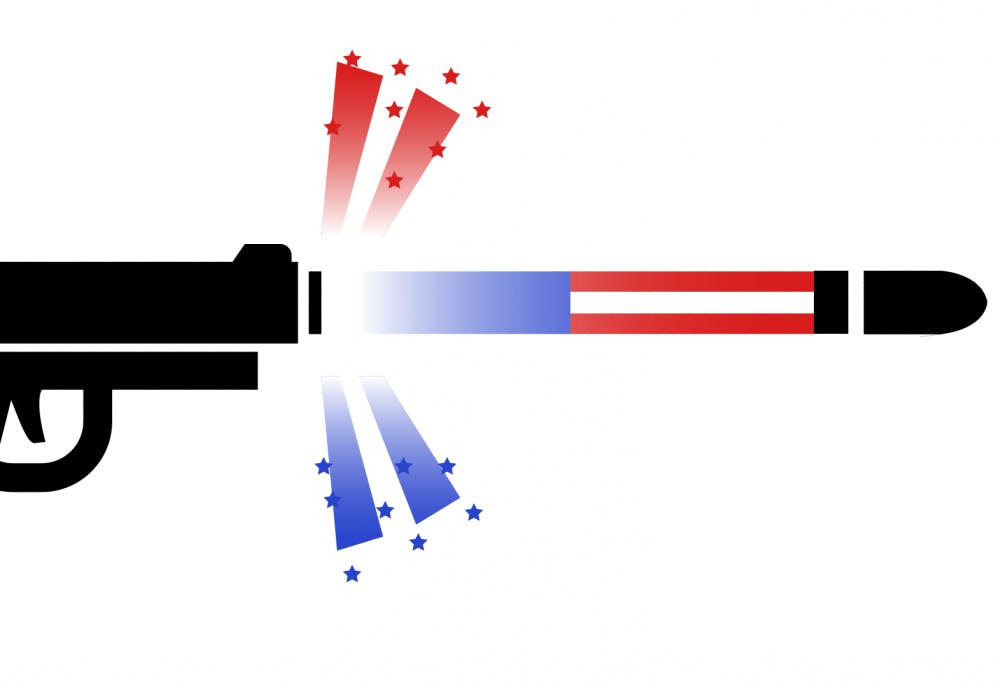 With 17 students dead and a nation rallying in support of change, gun legislation is on the forefront of debate.

Already in 2018 there have been three cases of open fire shootings in schools which resulted in injury or death. The first at Marshall County High school in Kentucky, then Italy High School in Texas and the Marjory Stoneman Douglas High School shooting in Parkland, Fla.

Freebird McKinney, an Adjunct Professor in Education at Elon University and history teacher at Williams High School, which experienced a lock down this week, comments on the changes arising from the recent events.

“In this day and age, we have to act on that and our ultimate goal is the protection of our students,” McKinney said. “So, if there’s been any change it’s in the sense that we’ve been much more heightened and alarmed at any type of rumor.”

Mayor of Burlington, Ian Baltutis, comments on the aspect of gun control within the Elon and Burlington community.

“My focus related to gun control is more about public safety,” Baltutis said. “I think a key part of the discussion is if you think you need to carry a gun in the community, something else is wrong.”

Baltutis believes the emphasis in the Elon community should be centered around public safety and providing support for those who need it.

“The Parkland shooting was a tragedy that is going to be a turning point for gun and mental health legislation,” Steelman said. “Through video footage from smart phones, we were all able to see the events of the shooting and understand the gravity of the situation we have on our hands. It's time to put politics aside and find a solution in the middle.”

The country is split regarding gun control versus protecting gun rights as one Pew Research study shows.

Katherine Evans, College Democrats President at Elon, believes that the legislation surrounding purchasing a firearm should be updated and is skeptical that legislation will change without more community participation.

“There’s mental health issues but there’s also regulations and rules that are fairly, in my opinion, outdated,” Evans said. “I think it was relevant for the time, but weapons have become way more advanced and way more dangerous since then.”

Evans believes the process could be similar to other systems set up in the United States that require background checks and intensive training.

Steelman also believes that improved reports of convictions to the database, the National Crime Information Center (NCIC), would make background checks would be more effective.

“As a conservative, I see no problem with implementing some regulations on automatic weapons and high capacity magazines,” Steelman said. “However, this is not enough to solve the problem.”

Neither North Carolina or Florida currently have any laws regulating assault weapons. Seven states and Washington D.C. have legislation on assault weapons; they are banned in Washington D.C., California, Connecticut, Maryland, Massachusetts, New Jersey, Hawaii and New York, and regulated in Virginia and Minnesota.

Additionally, the bump stock, an accessory added to allow a weapon to fire close to the speed of a machine gun and used in the Las Vegas shooting, is not banned under federal law.

Elon first-year Graham Wells has observed the United States gun legislation from the point of view of the international community, and as an American whose family has a vested economic interest in gun and gun accessories.

“I think gun control is a recurring issue because it’s just so terrible in general in the U.S.," Wells said. "It’s way too easy to get a firearm both legally and illegally.  I feel like it’s still a problem because it’s a lot more complex to implement gun laws in a country the size of the United States and as complicated as our country is.”

According to a study done by Pew Research Center in 2017, 74 percent of gun owners believe that owning a gun is essential to their sense of freedom.

Wells' grandfather, William Rogers, owns and operates businesses depending on guns and shooting ranges.
They are the Rogers Shooting School and Rogers Holsters.

“Firearms are kind of worked into our constitution and our way of life as citizens and for that reason it’s a lot harder to just sort of get rid of them,” Wells said.

Wells compares his experiences with firearms while living in Singapore and the U.K. to the current events in the United States.

“I lived in Singapore, which I think is the absolutely most safe place I ever lived," he said.  "It’s a really small country and the government has a really tight hold over what the people can and cannot do. There are no firearms. I never heard of, saw, or heard anyone talk about guns.”

Wells believes that while the U.K. allows firearms, their system of regulation is effective.

“You don’t hear about shootings or firearm related attacks in the U.K. at all and I think that’s because they have a really good system set up where civilians can have hunting rifles in designated spaces and they have to stay in those locations, and hunting rifles are nothing like the automatic or semiautomatic weapons,” Wells said.

However, Wells believes the issue is not solely related to gun legislation.

“I guess this isn’t only associated with gun violence," Wells said.  "You have to talk to people and make sure everyone’s doing OK.  I feel like there’s also a lot of problems in our schools with bullying and problems at home that lead people to these mental states where they feel like this is something that’s OK to do.”

Correlation has been drawn between Parkland shooter Nikolas Cruz and issues regarding mental health. Cruz reportedly had depression, ADHD and autism, bringing the argument of mass shootings being products of poor mental health procedures in the U.S.

Cruz was evaluated for mental examination in 2016 under the Baker Act in Florida which enables families and loved ones to provide emergency mental health services and temporary detainment for up to 72 hours for those who suffer from a mental illness and are unable to.

Wells said that looking from the standpoint of mental health versus gun control is too simple.

“I feel like there’s also a lot of problems in our schools with bullying and problems at home that lead people to these mental states where they feel like this is something that’s okay to do.” Wells said.

Evans believes that there are multiple factors that contribute to the essence of mental health and mass shootings.

Steelman believes that Elon is making changes that will help prevent these issues from entering the community.

“Elon University has begun a new mental health initiative that I think will be very important and hopefully uniting for this campus,” Steelman said. “While we need to look at issues with guns and regulation, we also need to respond to the mental health needs in schools and across college campuses.”

Baltutis believes that the community can impact the issues of troubled youth.

McKinney comments on the response from his students following the shooting during one of the class discussions.

“I think it was really interesting to get their take because they focused in on how it wasn’t so much a need for legislation on gun control but really and truly is more about just being a better human being," McKinney said.

McKinney believes his students are much more aware of the isolation of their peers and focused their discussion around character rather than the Second Amendment.

Since the Parkland Shooting, students from Marjory Stoneman Douglas High School have organized advocacy events ranging from March for Our Lives, walk-outs, speaking to their legislators and sparking the #NeverAgain campaign on social media.

The response has become national and federal. President Trump held a listening session on Wednesday for survivors of the shooting and has since proposed that teachers carry firearms during school.

McKinney believes that students, both college and high school, will be the proponents for change in the future.

Mayor Baltutis believes that unity and diligence regarding legislation and policy is where change will spur from.

“We end up in a pessimistic situation where we’re like ‘we’re not making any progress’ but so often if we can step back and find a place where we agree and step forward together then we do make a difference,” he said.

Wells agrees that a change in the public response to these issues is evident, as is the recognition of the complexity of the issue.

“I think it’s very naïve to say ‘either or’ is the problem If we were going to do gun control, or stricter gun control regulations, which is probably the smart move, it would be difficult to do that.” Wells said. “I think it’s going to get better, there’s no way it doesn’t. I’m not going to say it won’t get worse before it gets better but we’re also probably at our worst point in history.”

Evans believes that staying informed, having discussions and action are the best courses of response from the Elon community.

“I’m a huge proponent of actually getting people together to have bipartisan discussions. I think the school could facilitate those discussions,” Evans said. “I’ve noticed when we have had bipartisan discussions on campus, people agree on a lot more than you think they do even across the aisle. I really think it’s important that we get students together form all different political backgrounds and have a discussion on it.”

Evans is hopeful that the recent push of activism lead by the survivors of the Parkland shooting will initiate conversation and be a catalyst for change.

“No matter what your views are I think we can all agree something needs to change," Evans said.  "If that means coming to compromises between the parties, I think that is a necessary thing that needs to happen. I think people need to get together in a room and talk about human lives.”

Steelman agrees that the solution for the future of gun legislation lies “somewhere in the middle.”

“I would like to see future gun legislation be a product of true bipartisanship," Steelman said.  "It's time to leave politics behind when so many lives are being lost."

The March for Our Lives is planned for March 24 in Washington D.C.