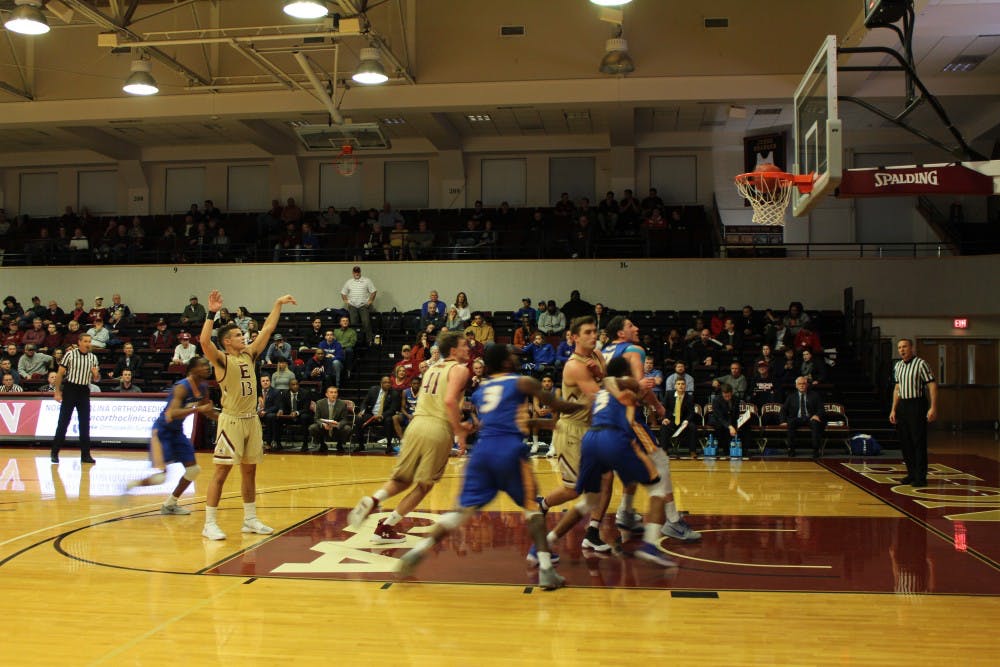 The Elon University men's basketball team entered tonight's game in fourth place in the Colonial Athletic Association (CAA) standings at 6-6, just one game behind 7-5 Hofstra. But the Phoenix couldn't get things moving offensively, falling to the Pride 48-67 in Alumni Gym.

After scoring the first field goal 24 seconds into the game, Elon was held scoreless for the first four and a half minutes of the game. Senior guard Dmitri Thompson ended the drought when he buried a three. He had the first five points for the Phoenix.

The first half featured a lot of missed opportunity, as both teams struggled to connect from anywhere on the floor. Hofstra went 9 for 30 and Elon went 12 for 29 in the first 20 minutes.

“Disappointing,” he said. “I think it was the tale of two halves. We’re pleased with our players’ competitive toughness in the first half and we were a couple shots away that we can make. We competed in the second half, but they made some changes defensively and it broke our rhythm. It just seemed like the harder we tried and the many different things that we tried continued to affect our rhythm and how we played on the other end.”

Elon was able to hold the nation’s fourth-leading scorer, Hofstra’s junior guard Justin Wright-Foreman, to just four points in the first half. He came out of the locker room with a vengeance, finishing the night with 21. Sophomore guard Eli Pemberton finished the night one off of his season high, collecting 27 points for the Pride.

“I thought in the first half we had a pretty good rhythm. Shots were falling – we had a bunch of different guys in,” said junior guard Sheldon Eberhardt. “In the second half, we just kind of lost our rhythm and shots weren’t falling and they did a good job of matching up and throwing different defenses at us.”

Elon was able to defeat Hofstra 89-76 on Jan. 7, but tonight’s game was much different and much lower scoring. One of the biggest differences was the fact that senior forward Brian Dawkins did not play. After putting up 18 in the first matchup, the team’s fourth-leading scorer and second-best rebounder had his left arm in a sling as he watched from the sideline tonight.

“Brian hurt his hand on Monday,” Matheny said. “We’re hearing 10-14 days from the injury, so we hope to have him back pretty soon. We’d love to have him back sooner rather than later. It’s tough and he’s been such a staple in our lineup that we were a little disjointed as a result of it. But that doesn’t take away from the way Hofstra defended us.”

“We tried as quickly as possible to discuss ways to shift around our lineups," said junior forward Tyler Seibring. “We knew pretty early in the week, but it doesn’t matter with somebody like BDawk offensively – he’s going to be missed.”

Seibring was the only Phoenix scorer to finish the night in double digits – collecting 16 points on 19 attempts.

With the CAA Tournament approaching, Matheny was quick to look at the glass as half full.

“You’d love to think this is a blessing in disguise,” Matheny said. “We were forced into play different guys in some different combinations and I thought we had some guys come off the bench and do some great things.”

Elon relied on the bench early, as senior forward Jack Anton collected four points and freshman forward Simon Wright added another five in the first half.

“I know he hadn’t played in the past several games, but I thought he gave us some really good minutes,” Matheny said about Anton’s play. “Simon’s getting better and better. He had a two or three play stretch there that kind of swung the tide in the first half. I feel pretty confident to play him and I thought Anton potentially earned some more minutes the way he played.”

After a possible mumps outbreak on the James Madison University basketball team, Saturday’s game against the Dukes was postponed to a later date. Although not planned, the break gives Elon some time to get back into form.

“This break, although we didn’t select it, comes at a good time because we get to go back into the laboratory and work and kind of smooth some things out,” Matheny said.

“The main thing is just getting rest,” Eberhardt said. “It’s also getting in the gym, getting shots up – especially after a shooting performance like this. It’s important to keep working and keep our heads up.

Elon is not scheduled to play again until Feb. 15, when the Phoenix takes the road to face the University of North Carolina at Wilmington, the first of a three-game road trip.