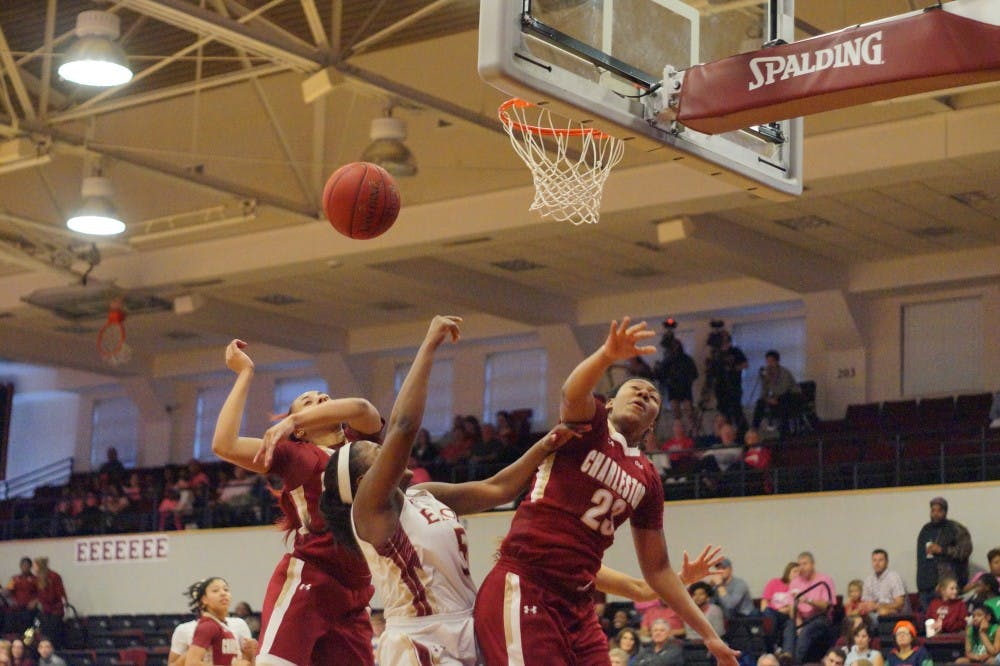 Capturing its 16th-straight win in Alumni Gym, the Elon University women's basketball team dominated the College of Charleston 97-44 in their annual Play4Kay game. Just shy of the centennial mark, the Phoenix set the record for the most points in a Division I conference game.

Five Elon players finished the night in the double figures. Senior guard Shay Burnett and freshman forward Jaylin Powell each had 15 points on the night, sophomore center Ra'Shika White scored 13, and sophomore guard Lexi Mercer and senior center Malaya Johnson each captured 10. This is the third time this season that the team has had five players reaching double figures.

"It was a well balanced effort today," head coach Charlotte Smith said. "The bench came in with a lot of energy and focus. Defensively we continue to get better and better every game and that’s what we want is to progress.  I felt like down the stretch, we want to work our offense and try to execute, see if we can do that, and I was just proud of the way we started and proud of the way we finished the game today — from start to finish."

"When everything’s going right, I’m kind of just thankful for my teammates allowing me to get good scoring positions," Powell said.  "I think we had a good game defensively which helped us on the other end offensively."

Elon maintained at least a 30 point lead over Charleston after going on a 21-0 run in the second quarter. The Phoenix ended the game with an 8-0 run in the last three minutes, scoring just shy of 100 points.  Despite the consistently large lead, the team focused more on their defensive strategies than the scoreboard and treated each half as a brand new start.

"Every halftime is 0-0," Powell said.  "Just come out each time with a new mindset and a new game … just us versus perfection.  You can’t underestimate anybody, but just take it one play at a time and do our best each play."

In making the proper corrections and creating a stronger defense, the Phoenix was able to cruise past the Cougars for the second time this year.

In addition to a strong defense, creating more open positions and getting the ball to key players allowed for a career high for Powell who took 2-of-3 from long and scored 15 total points. Freshman forward Emily Maupin made her mark on the game by capturing her first collegiate career three pointer.

"I’ve been in the gym more lately, just trying to make shots and when I get out there I want to be able to produce as much as I can so, I just took shots whenever I felt like I was open and wanted to execute," Powell said.

The win today moves the Phoenix to 17-7 overall, 9-4 in the Colonial Athletic Association in which Elon currently sits in third place.

"Like I said last game, our best is still yet to come," Johnson said.  "We’re playing well and we’re kind of stringing things together more and more that we’ve been working on all season and I feel like it’s showing.  But most definitely still we have not peaked.  Our best is yet to come."

Elon will take the road and head to New York to play against Hofstra University this Friday, Feb. 16. Tip off is scheduled for 7 p.m.