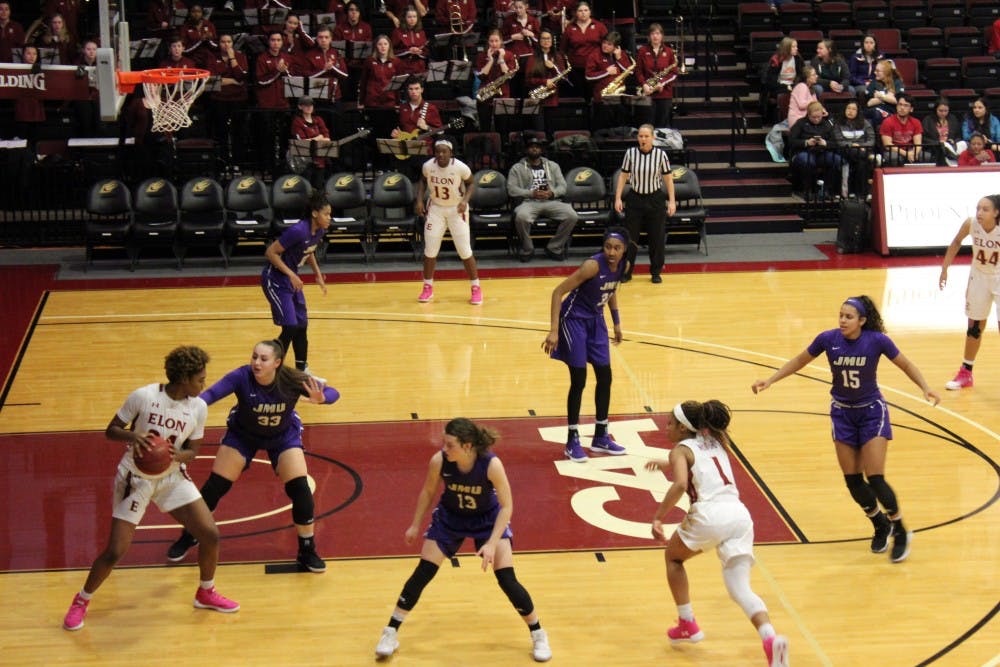 James Madison University's 11-game winning streak ended today after the Elon University women's basketball team won 50-43.  Though the game started off with several turnovers from both teams, Elon managed to end with 16 points in the first period— a 10 point lead over James Madison. It was an important game for the Phoenix as they lost their first match against the Dukes, so there was no room for anything but a strong start and an even stronger finish.

"It was very important," senior guard Shay Burnett said. "We just came out in the first quarter, came out hard, fighting.  We got to a 17-3, 12-3, something like that, run. And I just thought that we just kept the momentum.  We kind of slacked up a little bit in the first part of the second half, but other than that, I think we kept a foot on the pedal and came out with the ‘W’.”

The large leads throughout the game didn't come as a surprise to the players, who were more focused on their strategies than the scoreboard.

"I think we were more engaged with focusing," sophomore guard Jada Graves said.  "Coach always tells us to stop, score, stop, so we're not really focused on the points.  We were just working on stopping the ball."

A strong defense was key for Elon, as James Madison's usual tactic is taking uncontested shots.  The Phoenix worked successfully to alter the comfort of the Dukes in terms of their shooting positions.

A lesson learned from their previous game against the Dukes, specifically with sophomore forward Kelly Koshuta — a threat who worked to take down Elon on Nov. 18.

“The inside presence was Koshuta," head coach Charlotte Smith said.  "She’s a strong body down in there.  And at their place I felt like we gave her a lot of drop, step, score opportunities, where you just go in for a layup.  I felt like we did a better job today of taking away easy looks for her in the basket."

Along with keeping JMU away from the basket came a series of steals from Graves.  Though this aided in a buy for time and helped Elon to avoid tying with their opponent, her steals unsuccessfully entered the basket.

“This game was a high paced game and sometimes we didn’t take control of the speed of the game … but I think we did a good job overall,” she said.

“I felt like we played better at their place than we did here today; especially offensively," Smith said. "Offensively we were great at James Madison.  Today, I think both teams struggled a little bit offensively, but I have to give credit to our defense, and the fact that we put Jada on Smalls; told her you have to shut her down.  She was on her like white on rice, in the fourth quarter and down the stretch because we knew that they would want to go to her.”

Going from losing by 18 points to winning by seven shows that Elon is in peak form — a powerful force on the court— taking good notes after a loss and making the appropriate changes.

“I just think that we can compete with anybody," Burnett said.  "We can beat any team in the CAA, but we just have to come out and play how we know how to play every day, every game.”

“That’s the goal is to rise," Smith said. "That’s what the Phoenix does, it rises.  That’s our goal is to continue to try to rise and then we have to climb our way to the top.  It’s not going to be an easy ascension.  We have to claw our way back to the top, and we just have to focus in one game at a time.”

Elon takes on Drexel University on Friday, Feb. 9 at 7 p.m. in Alumni Gym.