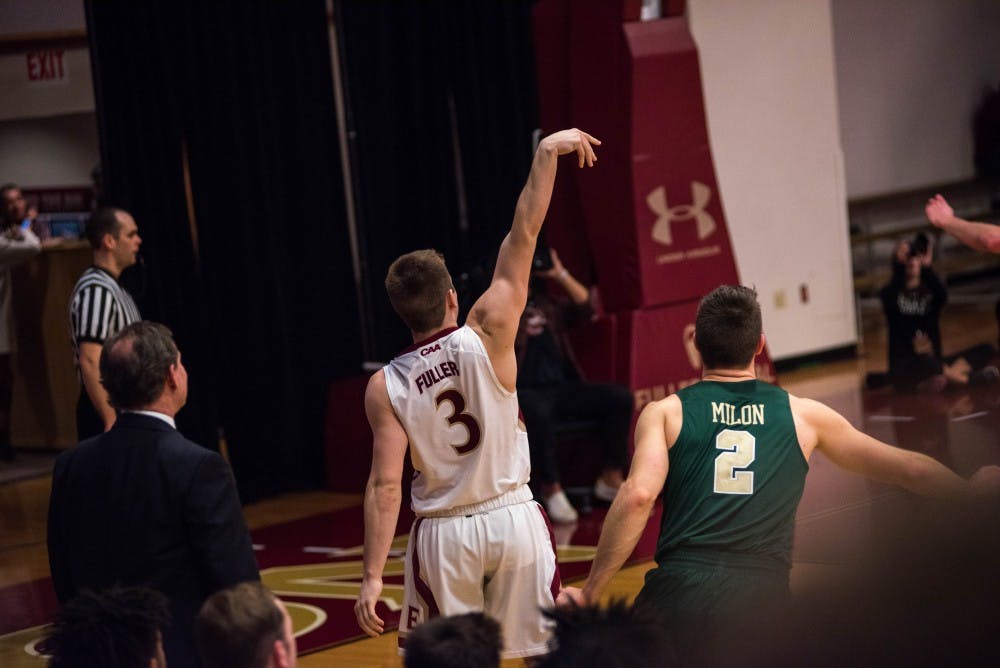 They might not have the most recognizable names on Elon University men’s basketball team, but they are making a name for themselves on the court.

Two freshmen have been averaging eight minutes per game and helping the Phoenix squad capture much-needed wins as March approaches. Freshman guard Seth Fuller and freshman forward Simon Wright are both making the most of their first seasons playing on the team.

To them, wearing the maroon and gold is an honor.

“We have three pillars that we kind of live and die by — it’s trust, commitment and care,” Fuller said. “It’s trusting in what we’re doing here, committing to everything our coaches tell us. And we’re all committed to each other, and we all care about each other.”

Wright said their values bring the team closer together.

“I’d say it’s living by the values that coach preaches,” Wright said. “I feel like we’ve done a good job together of accepting it and working together to whatever it is we’re trying to accomplish.

After being called from the bench, both Wright and Fuller enter the game with a youthful vigor and a purpose in mind.

For Fuller, the opportunity to play is particularly special. Fuller redshirted his first year at Elon after a foot injury sidelined him for the majority of the season.

“Obviously I didn’t want to be injured, but it worked out for me,” Fuller said. “We had two veteran point guards ahead of me in Luke Eddy and Dainan Swoope. Just watching those guys and watching how they led the team was huge for me, and I think it’s helped me a lot this year.

“I think there’s a lot of value in learning and watching – I’m grateful for that.”

Wright said he approaches each game ready to support his teammates and mentors.

“I think the biggest thing for me is to just supply energy,” Wright said. “Our main guys play all the time, and it’s easy to get out of energy. I know that when I come off the bench ... my main role is to just provide energy and help everybody else play well when I’m out there. I know I’m not going to be out there for a long time, but when I am, I do have a responsibility to make the team better.”

Because of recent circumstances, Fuller and Wright might be called upon more often. Senior forward Brian Dawkins suffered a left hand injury in practice last week and arrived to the Feb. 8 game in a sling.

In his absence, both Fuller and Wright know that their opportunities to play have greatly increased.

“I’d say that everybody has to stay ready because nobody knows when you’re going to get an opportunity or where they have to step up and help the team,” Wright said. “I think it’s a wake-up call — everybody has to be ready at all times. In practices, it’s more competitive now ... because everybody realizes that everybody has a shot and so you just want to make the team the best they can be.”

Up to this point in the season, Wright has played at least one minute in all 26 games, averaging 1.6 points, 1.2 rebounds and 0.5 assists in each of those appearances. Fuller, who has played 25 games, averages 2.3 points per game, including a career-high eight points in the first game of the year at then top-ranked Duke University.

For the duo, some of those games have been more memorable than others.

“I think our win at Towson was big. We had never won there, and I had the opportunity to play more minutes than I normally would,” Fuller said, who scored six points in 20 minutes during the game on Jan 27.

“That was a cool experience for me. Then, as a team, our trip to Indiana State right before Christmas break was huge for us. We got a huge win there against a very good team.”

Wright agreed and said those wins were motivational for the entire team.

“Right before [those wins], we were kind of in a slump, and they were really big bounce-back wins where we performed really well,” Wright said.

Both players were recruited by Elon’s coaching staff but said Elon was what they were ultimately looking for.

“I think they found me at an Amateur Athletic Union tournament in Dallas,” Wright said. “Right away, when they contacted me, I started researching the school, and I loved it, and my parents loved it.”

Fuller had the chance to impress on campus.

“I came down for a summer camp with my high school, and I had been in contact with the coaches,” Fuller said. “I played well, and they extended me an offer. I fell in love with the campus and the coaching staff.”

With five games remaining in their first season of play, each contest is a critical test for Fuller, Wright and the rest of the Phoenix squad as March and the Colonial Athletic Association tournament approach.

“Right now, I think our focus is getting better every day, and so every single day is an opportunity,” Wright said.

Of those five games, only two will be played at home in Alumni Gym, with the next being senior night and the celebration of the final season at 7 p.m. on Feb. 24.