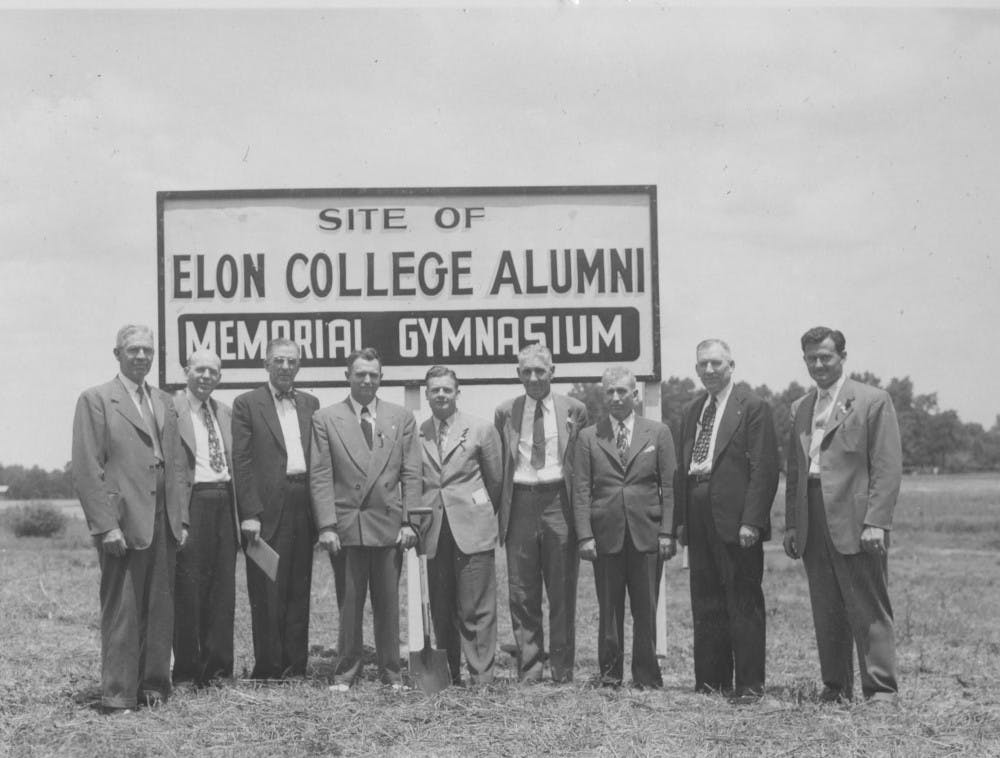 Opened on Jan. 14, 1950, Alumni Gym was built to honor the Elon University alumni who lost their lives in World Wars I and II.

It has since remained the centerpiece of Elon athletics, hosting the greatest players to wear maroon and gold whose records still stand today.

“I’ve been fortunate to see some great players here,” said Kyle Wills, senior associate director of athletics and head of business and operations.

Wills grew up locally and attended games in Alumni Gym throughout his childhood. After graduating from Elon in 1981, he was immediately hired by the athletics department and is now in his 37th year with the Phoenix.

For Wills, watching those great players will always stick out in his mind as some of his favorite memories of the building.

“I’m 12 years old helping work concessions stands, and when you shut the concessions stands, it was hard to find a seat. Tommy [Cole] was that good,” Wills said. “Tommy was just special to watch. Wish he could’ve been here tonight. He would’ve enjoyed it.”

Tommy Cole ’72 scored the second-most points in the basketball program’s history, and he is one of two Elon players to have his number retired. Jessie Branson ’65 is the other record holder, having scored 2,241 career points.

As the Phoenix celebrated senior night before the game against Northeastern Feb. 24, former Phoenix players watched and celebrated their old stomping grounds, reminiscing about their senior nights years ago.

“My most impactful memory [of Alumni Gym] is when we played Davidson my senior night,” said Adam Constantine, who played on the team from 2006 to 2010. “I had about 50 people here for my senior night, and the crowd was just going absolutely nuts. It was one of those where it was just an absolutely amazing atmosphere.”

With a current capacity of 1,607, Alumni Gym is the seventh-smallest arena in Division I sports. When it fills, the atmosphere is like no other.

“Alumni has been special,” Dawkins said. “Getting that extra year to be a part of this atmosphere is great, and to finish my final season and Alumni’s final season is a special thing for myself personally. We play in big arenas and things like that, but the family feel when we play inside this gym is special.”

During Alumni Gym’s construction in the mid-20th century, Elon students served as part-time laborers, and professor A.L. Hook’s physics students wired the building. Upon its completion, a memorial plaque listing the names of the four alumni who died in WWI and 33 who died in World War II was placed in the foyer.

The building has been remodeled twice, first in 1992 to install air conditioning, new flooring, additional seating, offices, classrooms and renovated locker rooms and again in 2010 to make it the gym that it is now. Crews added stadium-style seating in a horseshoe shape around the court, creating the atmosphere players and fans enjoy.

The gym has witnessed the transition from the National Association of Intercollegiate to the NCAA, a change in the mascot from the Fightin’ Christians to the Phoenix and most recently, a move from the Southern Conference to the Colonial Athletic Association.

The gym’s next move is much bigger. Though it is just across the street, the new home holds more than three times the number of people that Alumni Gym did.

“It’s definitely bittersweet, but it’s an exciting piece because you always want anything that your name is attached to to continue improving,” Constantine said. “Knowing that they’re moving from this facility to an even better one where there’s going to be even more memories made is amazing to say that I was part of that foundation that led to that.”

“I think it’s just time for us to move into a facility that’s a Division-I basketball facility,” Wills said. “This is a gym … that’s a coliseum.”

The men’s team finished off the regular season, and their time in Alumni Gym, with an 84-90 loss against James Madison University Feb. 26. The women’s basketball team will host its last game in the gym March 1. Though the teams will move out, the history and memories will remain.