Fairways and family: How one set of brothers is keeping a trend alive on the men's golf team 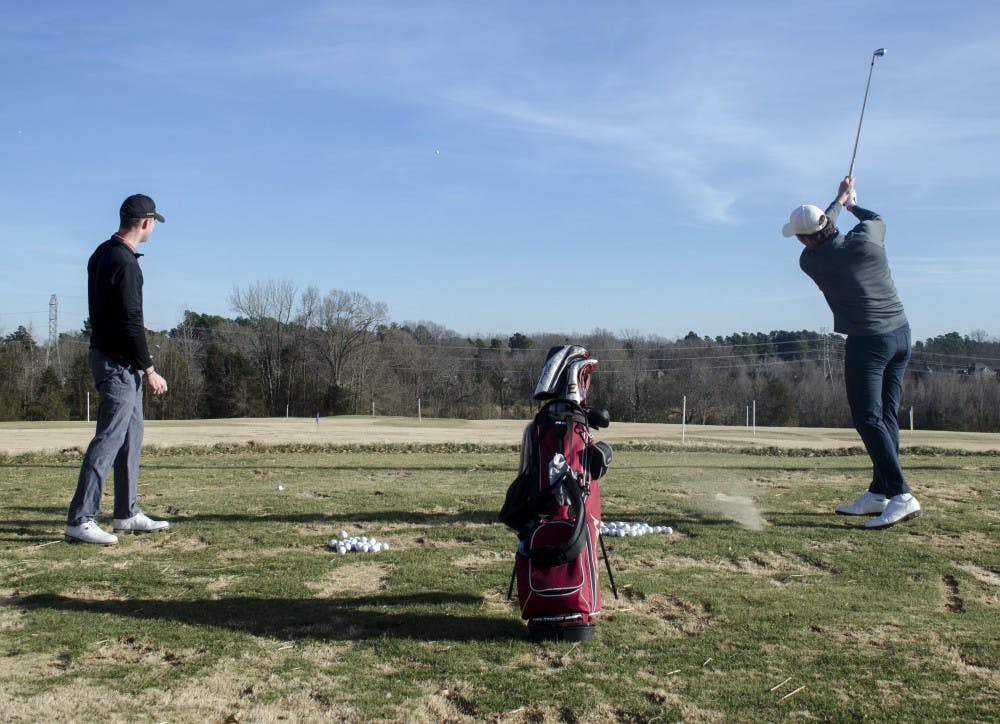 “When I transferred, I was looking at a few schools,” Patrick said. “Will mentioned that he was being recruited here by Coach Hill, and there’s so many kids from our hometown that come here every year, so I reached out to a few of my friends about the school, and it’s just ironic that both of us ended up here, and it’s ironic that this was actually the first school that I visited in high school.”

“Pat bounced around a little bit before he found his home here at Elon,” said head coach Don Hill. “Will was more of the typical recruited student-athlete out of high school. Never ever dreamed that they would be on the same team at the same time.”

Because of the NCAA rules on transferring, Patrick had to sit out his first year at Elon. When he started playing again this year, he was joined by his younger brother.

“He’s been here for a couple years now, so he knows everybody, knows everything,” Will said about his older brother. “It was nice to have him show me around a little bit, and he’s good for support … if I ever need help, I can always turn to him, so it’s good to have him here.”

Even if both brothers are playing their respective first season’s in the Elon polos, Hill says that the experience is different for the brothers.

“Patrick and Will are on very different ends of the spectrum,” Hill said. “Patrick is a fifth-year senior, playing it out. He’s 23, and Will just turned 19. There’s a big difference between 19 and 23. Will lives with the other first-years on the team and Patrick is living with a friend off campus. They do share a car, so I guess they have to communicate a little bit. But, they run in different circles.”

Even though they don’t run in the same circles, when they step onto a golf course they become part of a cohesive unit – the Elon University men’s golf team.

“It’s honestly not as different as I thought it would be,” Patrick said “Obviously we’re really close, and we help each other with whatever we want, but at the end of the day we’re just here to push each other to be the best golfers we can be. Me, being a senior now, and Will being a freshman, that’s kind of my job to motivate him and help him reach his potential because he has three years left after this year. So I think that’s a pretty unique aspect that I have here that I didn’t have at my two prior schools.”

Playing golf together is not something that is foreign to the Frodigh brothers. Growing up next to a golf course, the brothers, accompanied by their father, Peter, would sneak out at dusk to practice. This continues to this day as the family is still a member of the same club, and they play whenever they can at home. Hill says that having them together at Elon is something he likes.

According to Hill, each person on the team brings something unique to the squad, and that includes the Frodigh brothers.

“I think Patrick provides good leadership, and Will is more of the quiet type is some ways,” Hill said. “I’m sure he probably talks a lot when I’m not around – Patrick has no problem talking in front of me. But I think the dynamics there are good.”

When it comes to their games, each has a unique skill set, too.

“You can’t teach size and speed, and they’re big, strong guys that hit the ball a long ways,” Hill said. “We play a lot of golf in March and late October and November and February and those things … you need those things. You’re playing in March and if it’s raining, 45 degrees, you have to keep the ball in the air.”

“We have 12 guys who contribute every day that we’re really looking forward to the spring because this fall we won our home tournament, and we had a couple other high finishes, but we definitely didn’t meet our full potential at all,” Patrick said. “Going into this offseason, we all have good things to work on and get ready for the beginning of February.”

When it comes to playing the game they share, each of the Frodigh brothers enjoys something different about golf.

“My favorite part is probably the challenge of being able to play every day and playing differently,” Patrick said. “You can play poorly one day and still score well and then the next day you can hit the ball unbelievably and just not make enough putts to shoot a low score. I like the challenge of going out every day, whether it be on a new course, different weather conditions or pins – there’s just so much variety. I just love the challenge of that.”

“You can always a hit bad shot, but you can always recover from it as well,” Will said. “I also like how everything is on you, so you can’t really blame anybody else, and it’s all about preparation. My favorite aspect specifically … like the tee game. I’ve always liked that the most. I don’t know why, it’s just my favorite part.”

For Hill, the Frodighs are not the first set of brothers that he’s coached. According to the coach, this is either the third or fourth set of brothers he’s had on the team.

“No ... I promise I don’t try to do that,” Hill said. “It’s all about relationships and relationships with your guys. When you treat people the right way, you’re honest and fair with people, then you’re fortunate to recruit good people. It kind of lends itself to brothers wanting to do that.”

The Frodighs are the first set of brothers Elon has had on the golf team since Jonathan and Will Dilanni played together from 2013-2015. Hill is hopeful that the trend will continue.

“We have guys on the team that have younger brothers who are good golfers,” Hill said. “I can’t say everything because there are NCAA rules about recruiting, but I hope it’s not the last set of brothers that I coach. My guess is that this probably won’t be.”