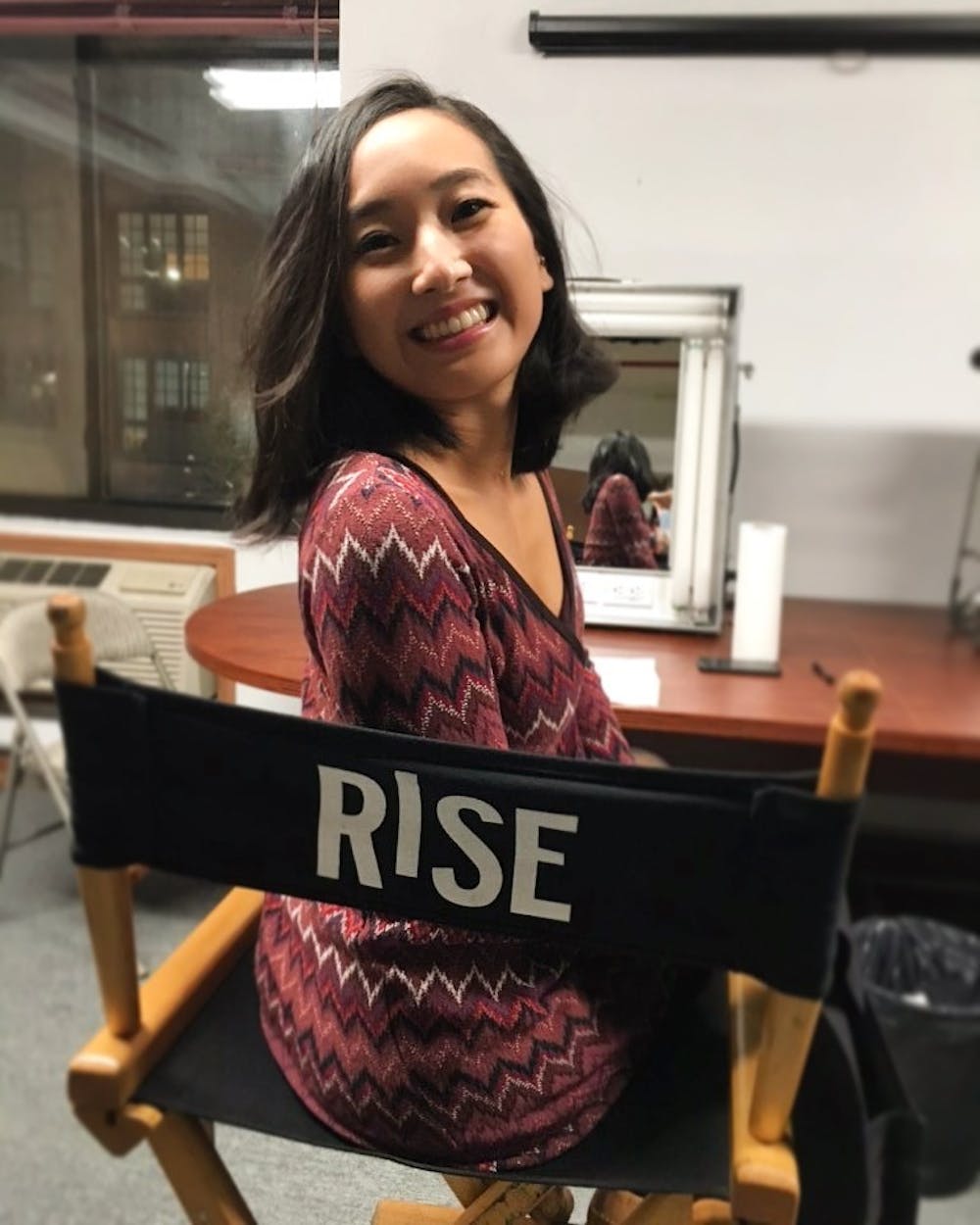 In NBC’s newest drama, Rise, viewers will see and hear How I Met Your Mother’s Josh Radnor yelling across the screen in the role of Lou Mazzuchelli, a dedicated high school teacher who takes over its sinking theater program.

Sumi Yu, ’15, playing a violin — or rather, miming playing a violin to a prerecorded track of herself actually playing the violin — can barely make out the Radnor’s words. His TV yells are real-life whispers from where she’s at on set. In TV, unlike musical theater, Yu’s major at Elon, the audio levels must be catered to the location of the recording equipment.

Yu plays the recurring role of a violin player in a high​ school band in the show Rise that comes from the same producers of Hamilton, Friday Night Lights and Parenthood. The series premieres March 13, and Yu’s character enters halfway through the season.

“I had never done anything TV-related at all,” Yu said. “There are a lot of acting majors at Elon who move to New York to do film, but I wasn’t really pursuing it. I was mainly doing musical theater.”

Yu signed with an agent right after graduating from Elon and before being in Rise had performed in musicals like The 25th Annual Putnam County Spelling Bee and Freaky Friday. She also worked what she calls “survival jobs” like babysitting and dog walking. She never expected to work in TV while hopping from gig to gig in New York City.

“They were specifically looking for actors who could play an instrument, and I grew up playing violin, but I thought, ‘I’m not that good to be playing on TV,’” Yu said. “I found out the next day I had gotten it, and I was shocked. I didn’t think I would be on TV for my violin-playing skills.”

The differences between TV acting and acting for the stage are many. The show uses many New York City musical theater actors, but Yu still felt the shift in platforms. In the studio and on set, her workdays can sometimes be as long as 6 a.m. to 10 p.m., and the end goal is to get a good take, not repeated shows.

“One scene may take three hours to film, but then after that the actors can just forget their lines,” Yu said. “It’s crazy because in theater the plan is memorizing your lines, and then putting it up and doing it every night.”

Linda Sabo, associate professor of performing arts, changed Yu's perspective on herself when she cast her in "Next to Normal" her senior year spring.

“She cast me as the lead in the role, and it’s generally about a middle-western white family,” Yu said. “I was the Asian daughter, and it didn’t interfere with the story or the show at all.”

The casting marked a point in Yu’s life where she became committed to looking into every opportunity, even if it doesn’t seem necessarily ‘right’ for her.

“She thought I fit the role, but I really didn’t expect it,” Yu said. “That was my first inspiration to thinking, maybe I’m not who I think I am, in this box that I’ve put myself in. She was the first person to open my eyes to that.”

Yu leaves early this week to join the cast of Oklahoma in Colorado Springs, where she continues to perform in roles she hadn’t predicted herself taking.

“I went into the audition not expecting anything because it’s a generally Caucasian show,” Yu said. “But then I got it. I’ve learned a lot with acting that you never know. People see potential in you in different ways than you would ever see.”

Rise premieres on March 13, the day after Yu will get back into the city. She’s unsure whether she’ll be spending the night with the cast at a red-carpet premiere, but if not, she’s content to watch it on Hulu the next day — she doesn’t come on until the 5th episode.