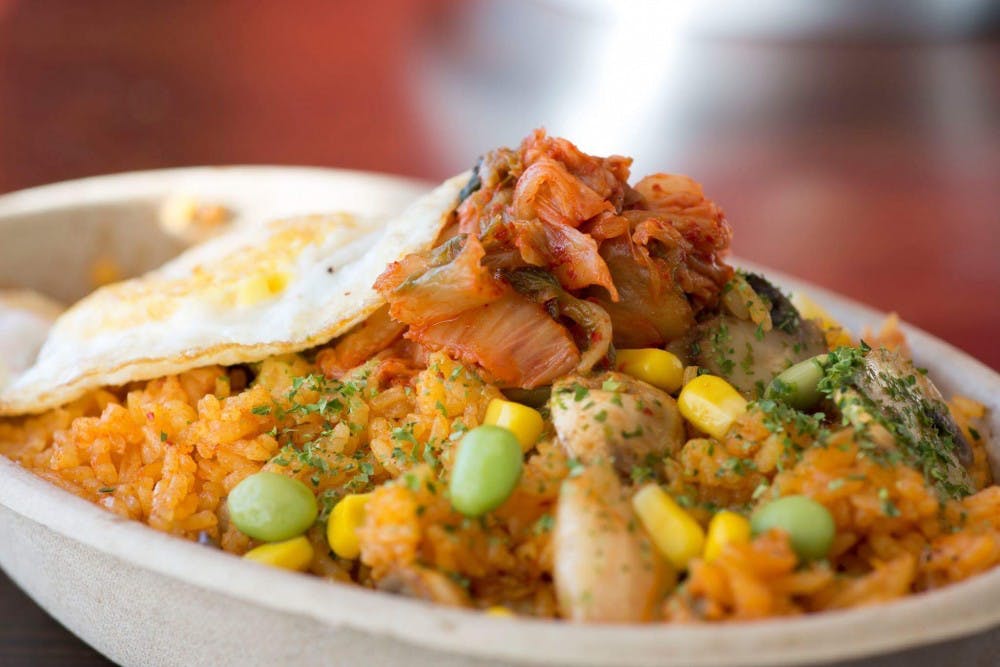 Leave your preconceived notions at the doorway. Taco Bao has taken everything you thought you knew about tacos, flipped it upside-down and served it up on a warm piece of bao.

Since September 2017, Taco Bao has been crafting Asian-Mexican fusion-inspired cuisine unlike any other.

Located on the fringes of the University of North Carolina Greensboro’s (UNCG) campus, Taco Bao caters to both students and locals. The restaurant offers a mix of traditional Chinese food, like bao, a sweet and soft Chinese bun made of flour, and more Americanized food, like rice bowls, to appeal to everyone. Owners, husband and wife duo Ken and Ling Huang, said that Taco Bao has a Mexican base. From there, influences from Japan, Korea, Thailand and China are layered on top. There’s nothing purely Mexican, and there’s nothing completely Asian.

Take one step inside the restaurant and you’re greeted by an expansive digital menu, a cozy seating area and brightly decorated walls. But walk up just one flight of stairs, and you’ll reach student dormitory housing. Taco Bao rents their restaurant space from UNCG – as do all neighboring restaurants. Students at UNCG can use their Flex, similar to Elon’s meal dollars or Phoenix cash, to pay for food from all of these restaurants.

For Ling and Ken Huang, who are the head chefs as well as the owners, this is not their first rodeo.

The pair met 15 years ago while Ken was studying restaurant management at Appalachian State. Since then, they’ve owned and operated several restaurants around North Carolina.

“We recently sold some of our other restaurants because we really wanted to focus on Taco Bao.,” Ling said. I don’t think you can find anything similar to this, and that’s really special.”

Ling and Ken said that they wanted to make food you can find in big cities available in North Carolina. So far, the concept of Asian-Mexican fusion has been a hit.

“This is my first time here, but it’s so good! I really like it,” said North Carolina State student Chloe Nichols.

Ling says that, while locals enjoy Taco Bao, it has been most successful at drawing in international students.

“My favorite thing to cook is the bao,” Ken said. “I start by seasoning the meat, then I stuff it inside a warm bao with red cabbage, carrots, cucumber and top it all with Korean spicy sauce.”

Almost all of what Taco Bao serves is made in-house ranging from the bao and tortilla chips to the tiniest details like ketchup.

“We don’t just import things, we actually cook it and make it here,” Ling said. “It’s the little things like that that set Taco Bao apart. There’s really nothing like this here.”