Creating a Business One Stroke at a Time 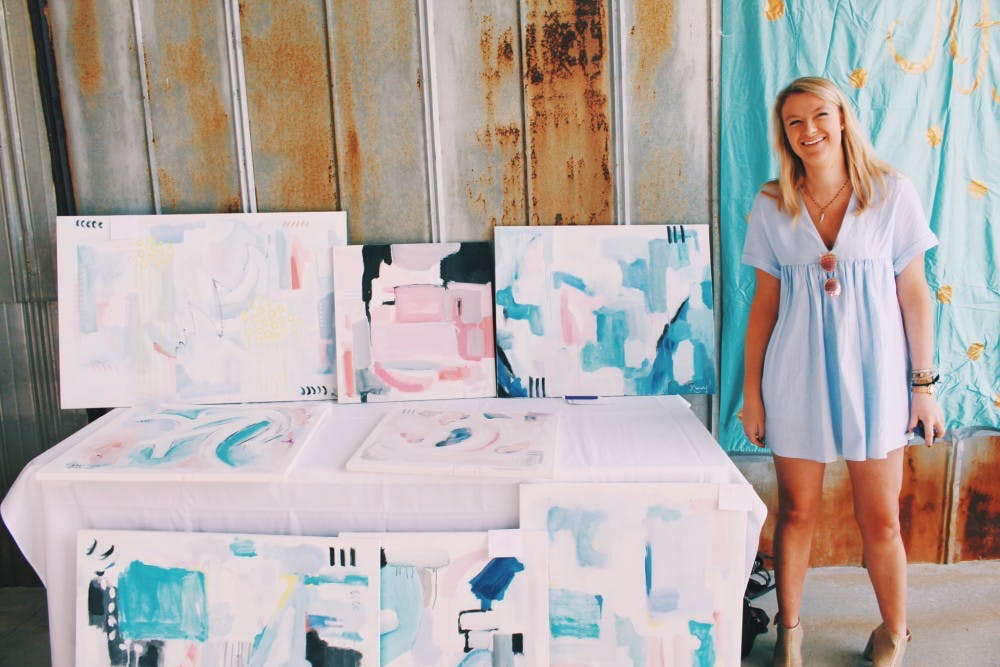 Junior Lucy White smiles as she displays some of her abstract paintings on a table in her art studio. Photo submitted by Lucy White.

Junior Lucy White remembers first selling and showcasing her abstract paintings at “Breakfast at Tiffany’s,” a mother-daughter event of the Gamma Nu Chapter of Phi Mu during the Fall of 2016. It was not until a mother asked her about the price when she realized the potential her artwork had.

“My paintings were cheap because I wanted to see if they would sell,” White said. “And they did, which was awesome.”

White’s interaction with the people at this event as well at Bonamu, another Phi Mu philanthropy event, led more people asking about buying her artwork. Customers from Elon and their mothers found out about her work through word of mouth and through the Instagram account @lucywhitestudio. Through Instagram, people can directly text or email her with specific orders. White paints abstract paintings of animals, portraits, figure drawings, buildings and what she has named “scrappy” paintings which are the ones done with a palette knife.

Senior Grace Shealy bought one of White’s pieces at one of the philanthropy events.

“I heard about her account from our mutual friends and followed her,” Shealy said. “Once she was getting ready for school a lot of people would comment asking her to paint something for their dorm rooms at various schools and it grew from there.”

White’s original intention for the Instagram was to serve as a place where people could see samples of her work and then tell her which style they wanted. Though this served its purpose, it also allowed White to turn her hobby into a job during the summer of 2017, painting eight hours a day.

“I wanted to take as many orders as I could because I had no idea what I really liked doing yet so I wanted to try as many things as I could,” White said.

White always had an interest in abstract painting.

“They are so fun to do,” White said. “You are kind of like throwing colors and you can do so many cool things and mess around with it.”

She recalls making a small art studio in a landing of a hallway outside her room in Charlotte. She laid a tarp down and placed shelves, a chair, a cart and an easel. White’s art business grew so much over the summer that she shipped orders to Florida, South Carolina and New York.

“I love Lucy’s art,” Shealy said. “I am always so shocked that every piece is different and unique but all of them have a similar pattern. It reminds me how she treats everyone like they are special.”

White says that the breaking point for her business was when she created a giveaway of a bull skull on a small canvas which led to more customers and followers on her page. Though her business has grown more than she ever imagined, she says that the most challenging part has been figuring out accurate prices and making sure her customers are pleased. Other aspects that first were difficult, but she has learned to deal with, are identifying and mixing color as well as mapping out specific features of a painting like a portrait.

“I think art makes people happy and makes them feel a certain way,” White says. “If my painting can do something like that then that is really cool.”

Though the most rewarding part of her work has been to see people be satisfied with her work, she too has benefited personally form her artwork.

“Art makes me feel relaxed and in my own space,” White says. “It is so fun and kind of like a therapy for me.”

White hopes her business keeps on growing and to one day have her own art studio.