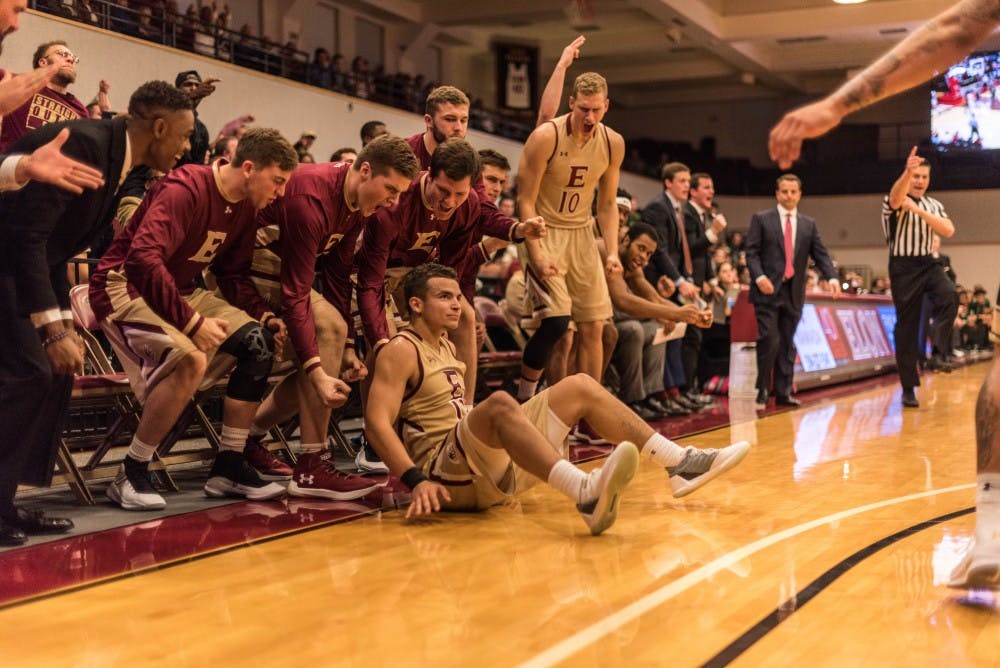 
Junior guard Dainan Swoope stares down a defender after being fouled while making a three-point shot during the Phoenix's game against University of South Florida Nov. 30.

He doesn’t have to be tall to make a big impact. In fact, he’s the shortest starter on the Elon University men’s basketball team, but when Dainan Swoope steps onto the court, he makes his presence known.

The 6-foot, 185-pound junior guard has had a stellar start to the 2017-2018 season. Through the first nine games of the season, Swoope is averaging 17.1 points per game, which is ninth in the Colonial Athletic Association. The next closest Phoenix is redshirt senior forward Brian Dawkins, who averages 13.4 points per game and is 18th on the list.

“I guess I would describe my game as kind of being a leader on the offensive and defensive side — trying to get us into our offensive flow,” Swoope said. “Just kind of doing the little things that will get our team a win.”

Offense has not been a problem for Swoope this season. From Nov. 17-22, he had four straight games where he scored more than 20 points. This included 26 in the triple-overtime win against Florida International University on Nov. 17, 25 during the Phoenix’s win against Concordia University, St. Paul the day after, 20 in the loss to the University of Wisconsin – Milwaukee Nov. 19th and 24 points at home against Radford University on Nov. 22.

During those games, Swoope averaged 23.8 points per game, something he credits to his mindset on the court.

“It’s the same mindset I have today,” he said. “Playing aggressive and shots were just going in and that’s what kind of just fueled me up for the next game.”

Swoope said seeing the ball go in the hoop was a confidence booster for him — both on the offensive and defensive side. But Swoope also was selfless when talking about his high-scoring nights.

"That just builds yourself up,” he added. “My teammates did a really good job of running our offense, staying with it and nobody was playing selfish. We were giving each other great looks and that was just a fun stretch to play in — getting those wins, too.”

The team chemistry is noticeable on the court. Elon returns all five starters and top scorers from last season. Swoope said having the veteran players around him makes it easy to feed off the energy from one another.

“Everybody is just really close — we’re all brothers,” Swoope said. “We hang out after practice, before practice, we’re with each other all the time. I just think that having that off the court just makes it even more fun being on the court to play with each other and have the success that we’re having.”

Through the first nine games of the season, Swoope is connecting on just about the same percentage of shots from inside and outside the arc. He is shooting 40.5 percent from inside the arc and 39.4 percent from downtown, an improvement over last year’s 40.5 percent and 36.1 percent, respectively. He attributes his higher numbers to the work he put in during the offseason.

“I think a really big thing was working out with assistant coach Chris Long,” Swoope said. “I was here both terms this summer and took some summer classes. But we worked out every single day. That’s what I feel like helped turn me into more of a point guard.”

Not only is Swoope the top scorer for the Phoenix squad, but he also leads the team in the number of personal fouls with 24.

“Sometimes you’re in a tough position to be in defensively and either I’m behind or they’re too early and it ends up being a foul,” Swoope said. “I don’t really think that’s going to be a problem going forward because that’s just the game of basketball ... I think I’m going to keep maturing and growing on the court and avoid fouls.”

As of now, the Elon team is 6-3. Since last week, the Phoenix played two games, both of which went to overtime with Elon coming out victorious.

“I definitely prefer not to play in overtime games, especially back-to-back games,” Swoope said. “It’s a lot of minutes on all of our bodies — kind of wears us down.”

No matter how much he says he doesn’t enjoy it, Swoope comes up clutch the extra minutes. In the double-overtime victory against Saint Peter’s University Dec. 2, Swoope knocked down a three while being fouled, completed the four-point play and helped the Phoenix pull away from the Peacocks in the second added five-minute overtime periods.

Swoope also played a big role in Elon’s win against the University of South Florida on Nov. 30. He was tasked with guarding one of USF’s top scorers, graduate student guard Stephan Jiggetts, who averages 12.1 points per game.

“Jiggetts was kicking my butt,” Swoope said. “He was scoring at will on me and I kind of took that personally and I didn’t want to allow that to keep going throughout the whole entire game.”

After talking about taking Swoope off Jiggetts at halftime, Matheny said Swoope didn’t like that.

“It really irked Dainan ... and that’s what I love about him,” Matheny said.

“I don’t want to be that type of person that just backs off a challenge,” Swoope said about wanting to continue to defend Jiggetts.

In the end, the decision to keep the matchup as it was proved to be crucial for the Phoenix. Swoope blocked the final shot by Jiggetts that would have sent the game into double overtime. Instead, Elon came out on top. Jiggetts finished the night with 21 points.

“[The game] comes down to [Dainan] defending [Jiggetts] on the final play — I didn’t have a great view of what happened, but I know that Dainan is tough,” Matheny said. “I started to say pride, but it’s more toughness. He’s a warrior, and a warrior doesn’t like to be taken out of the battle.”

For the Overland Park, Kansas, native, Swoope said there is no personal statistics line he would like to see at the end of the season. He just wants the team to do well — and to do one thing in particular.

“I want to make the NCAA tournament — that’s been a dream of mine since I was a kid,” Swoope said. “It’s just about us making everybody’s dream. We all have the same goal, same dream. We want to do that as a team and I think that it’s going to be really possible.”

The Phoenix will play its next game on Thursday, Dec. 7 when it makes the short trip to Greensboro to face the University of North Carolina at Greensboro, the first of a four-game span of away games.