Student shares pride and advocacy for her country from miles away 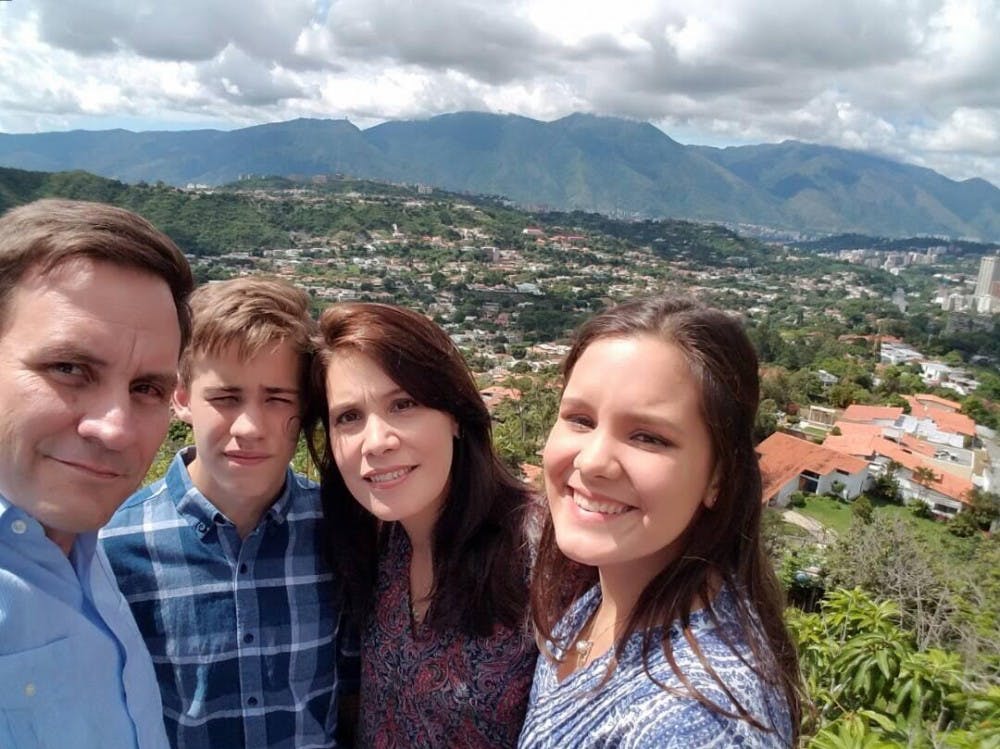 Blanco with her parents and younger brother in front of the El Avila mountain range, a view visible from the house she grew up in. Photo courtesy of Isabel Blanco.

Sophomore Isabel Blanco smiles as she talks, her bubbly laugh filling the crowded common room. The center of attention, Blanco perches on a beanbag with a friend. The Resident Assistant (RA) of the hall begins to speak, outlining health and safety inspection rules.

It makes sense that Isabel is concerned for her loved one’s safety, as it is something the sophomore thinks about every day. As of fall 2016, Blanco is one of seven Venezuelan citizens enrolled at Elon University. Together, Venezuelans make up .001 percent of Elon students. But Blanco, the student representative for the Hispanic Latino Working Group, the director of the service committee and secretary for the Latinx-Hispanic Union, student coordinator for the Center for Race, Ethnicity and Diversity Education and director of the Intersect Conference, is hoping her presence will keep the campus from overlooking the turmoil in her country.

Venezuela, a nation of more than 31 million people, has reeled in discord, protests and violence for the past 20 years, yet little conversation has surrounded the topic on campus.

“What we have in Venezuela right now is a dictatorship. They call themselves socialists, but they have been actively breaking and changing the constitution,” Blanco said. “They’ve been in power since 1998, that’s 19 years. It’s a dictatorship.”

Hugo Chavéz, Venezuela’s president from 1999 up until his death in 2013, was an advocate of the socialist party. Socialists believe that areas of production, distribution and exchange should be controlled by the community. Blanco thinks this strategy damaged Venezuela.

“It got bad when the oil prices went down. He didn’t diversify the economy. The economy was crumbling apart. So prices started going up, we started having food shortages and people were running out of money,” Blanco said.

Money wasn’t the only scarce commodity. As the protests intensified, Blanco saw less of her family members, who are active protesters in favor of the opposition. The opposition is the political group that opposes the socialist Venezuelan government.

Though often weighed down with concerns for her family back home, Blanco maintains her reasoning behind her decision to come to Elon has not changed.

“I came here not because I wanted an escape,” Blanco said. “I love my country and I never want to leave it because I’ve been forced to. I made a choice that I wanted to have a normal life.”

Sylvia Muñoz, associate director for the Center for Race, Ethnicity and Diversity Education, said Blanco has continuously impressed her over the past year.

“She has a commitment to the Latinx community on campus and to sharing her voice on issues that not only impact her, but also on issues that may impact others in her community as well,” Cisneros said. “She’s caring of everyone’s own unique struggles.”

Blanco displays this caring personality despite struggles back home.

“Emotionally it’s very taxing because her family is there,” Muñoz said. “So she worries about them, about what’s going to happen to them, especially when her family was active in all the protesting.”

But Blanco has not let this stop her. In fact, she’s used her experiences to shape her worldview.

“In turn, here at Elon, it’s given me more perspective on the things that matter,” Blanco said. “One of the things I value most is that it has given me the tools to appreciate things more.”

Muñoz said Blanco’s motivations stem from a need to improve the situation in Venezuela.

“The work she does of really trying to get herself as much as she can from other people, to understand where they are coming from, I think it comes from this desire to use her education to help.”

Muñoz said Blanco is a prime example for a model college student, striving to give back to her community.

“They are going to need people with education to build up [Venezuela]. She is very aware of that. I think that’s one of the reasons she has this education,” Muñoz said. “If everybody did this, we wouldn’t be in the world that we are right now.”

Mary Emmerling, a sophomore living in Blanco’s hall, said Blanco has a great amount of integrity.

“She does a very good job at turning what could be seen as a hindrance on its head, and using it to her advantage,” Emmerling said. “It’s reflective of how she means to live her life here as fully as possible.”

For Blanco, this means getting involved with many different organizations on campus.

“She’s very outgoing in choosing her roles at Elon,” Emmerling said. “I can see her pride in her Venezuelan heritage; it makes her vibrant and interesting, and it would be hard for anyone to ignore her.”

And ignore her they won’t.

This campus discussion may be two decades late, but Blanco said that awareness is one of the answers to the problem, and this is something that Elon’s campus can start participating in right now.

“Actively seek the coverage of what has happened this last year,” Blanco said. “Even though there are Venezuelans who go here who can afford it, it doesn’t mean there aren’t millions of people in our country who are undergoing circumstances they’ve never seen, like extreme poverty and hunger. It’s affecting every single person, whether you’re wealthy or not.”

Cisneros said that Elon has a responsibility to uplift students like Blanco.

“I think people should care because she gives a lot to Elon and our community. We need to provide that same support to her that she provides for us,” Cisneros said.

The most motivating reason to talk about Venezuela is the ever present humanitarian crisis the country
is facing.

“There should be more discussion on why it is happening and how that can be something that can spread to other countries,” Blanco said. “If we don’t acknowledge it, more countries are going to go through this, and that’s not a good situation.”