The elephants in the room: Elon Republicans still seek open dialogue one year after election 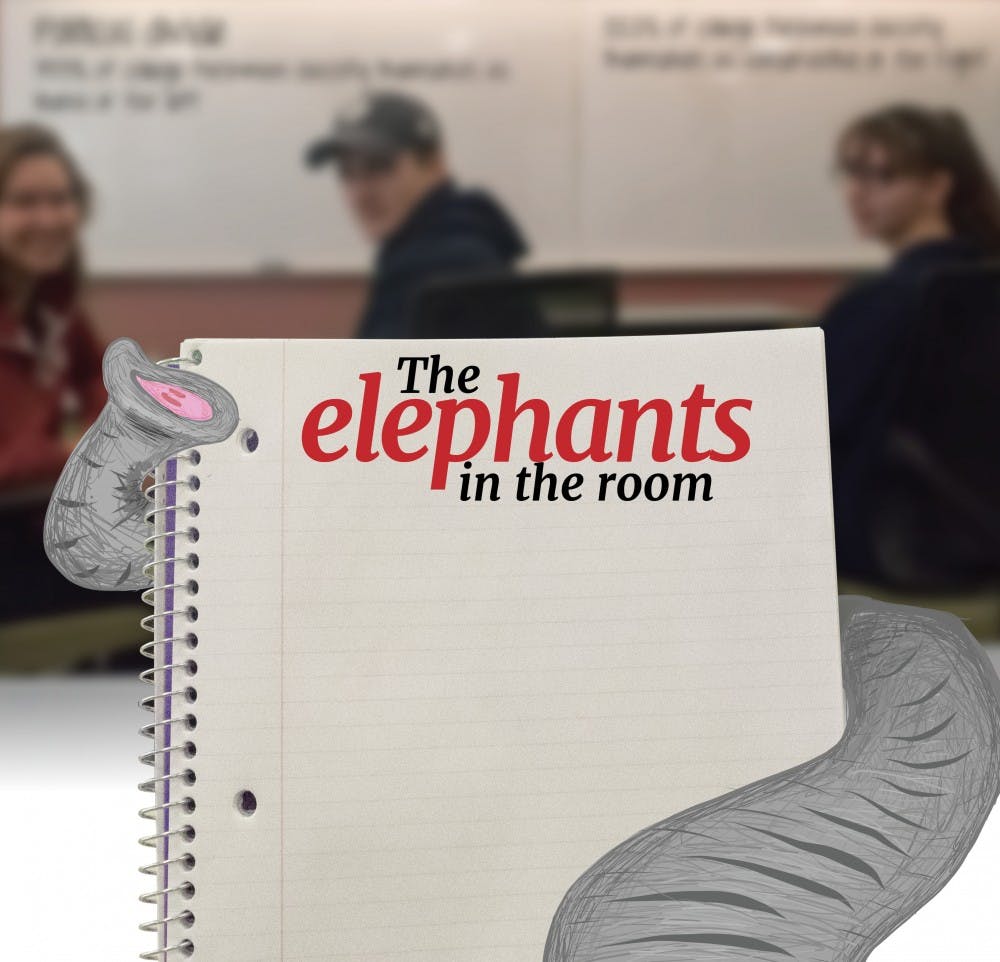 But the next morning when she walked around campus, she was scared.

“As a female Republican, I was confronted by a new kind of judgment for being a Republican that I never faced before,” Pierce said. “I got a lot of comments like, ‘You’re a woman, how can you support this man that is against so many things that are so important to you?’”

Even leading up to the election, Pierce experienced backlash.

Pierce, who is the public relations chair of College Republicans, once left her computer unattended to get food. When she returned, the Trump sticker had been ripped off. She said she was ashamed to report the incident to the administration because she thought she would not be supported because of her conservative views.

Last week marked the one year anniversary of Trump’s stunning election victory. In that time, his White House has been swarmed with controversies similar to the ones he caused on the campaign trail. On Elon’s campus, political views are still polarized. In particular, Republicans say they feel the brunt of the division.

“As a conservative woman on this campus, I often find myself staying quiet instead of putting my personal opinions out there just because I am afraid of being shut down,” Pierce said. “I’ve had classes where I adjust what I say in class, on tests and papers because I don’t want to be judged as too far-right.”

According to a CNN Politics poll, Clinton won the youth vote by 55 percent, while Trump won 37 percent of the Millennial voters age 18-29. Despite not winning the youth vote, Trump garnered 306 Electoral College votes out of the 270 needed to win while Clinton won 232. The voting in certain swing states surprised many, such as sophomore Trevor Murrah, vice chairman of the College Republicans.

“I did have mixed feelings about Trump’s policies — any rational voter should,” Murrah said. “Looking back at the results, I think it was a good turning point to see the Republican Party trying to unify and trying to come forward to a mission not just associated with Donald Trump as a person, but rather try to show what the silent majority was speaking to.”

“There are slightly higher levels of political engagement largely because of the policy context in part because we have a president who is unique in American history,” Husser said. “Now that the Republican party is in a better position to be able to affect change, that has led to more controversies in Washington, which trickle down throughout society and of course cause people to have different ideas on campus.”

Despite feeling uncomfortable at times, Pierce, along with other College Republicans, hope to discuss politics more openly with Democrats.

“We just want to show people we are not the current administration,” Pierce said. “Republicans on this campus are not monsters.”

"We just want to show people we are not the current administration. Republicans on this campus are not monsters."

Pierce hopes there will be a point where she is unafraid to be herself. She hopes the polarization in the nation and on campus will improve so people in the middle of the spectrum won’t be forced to choose a side.

Contrary to Pierce, junior Katherine Evans, vice president of College Democrats, has felt the need to speak her political views to have meaningful conversations without hesitation.

“I think if people are going to make judgments about me then so be it,” Evans said. “I don’t see any need to hide my political affiliation in any way in the classroom. I feel comfortable talking about it.”

Evans believes some people chose to remain quiet to be politically correct, and are afraid of the arguments from someone of the opposing view.

“We’re kind of at a stalemate right now,” Evans said. “If you don’t look at each other’s views and kind of try to empathize, sympathize or try to understand why they might feel that way, then you’re never going to
get anywhere.”

For Evans, the first steps to fix polarization on Elon’s campus are to be objective and take emotion out of discussions. Understanding Republicans and their thinking allows for open conversations on politics, which
humanizes them.

“You can’t really live your life in a bubble surrounded by like-minded people,” Evans said. “It keeps you from seeing other viewpoints and other ways of thinking.”

Reaching out to the other side

Evans and Pierce said both sides have tried to do just that — surround themselves with contrasting
viewpoints.

Murrah said the months leading up to the 2016 election unearthed tension between Elon’s political clubs and beyond. Since the election, he thinks those organizations — College Democrats, College Republicans and Young Americans for Liberty — have changed. Debates, such as the ones hosted by the Elon Political Forum, exemplify that.

“I think we’ve started to see a trend in which the political clubs are starting to come more and more together to not polarize the campus, but rather have a civic discourse and try to push a more pleasant way to talk about politics,” Murrah said.

A May 2017 study by the University of California at Los Angeles Higher Education Research Institute showed political polarization of the university’s freshmen. It has been the most extreme in the survey’s history in 51 years.

About 42.3 percent of freshmen characterized their political orientation as middle of the road, while 35.5 percent considered themselves liberal or far-left and 22.2 percent said they were conservative or far-right.

“I will say of the universities I’ve been watching across the country, I think Elon is on the better end of dealing with it,” Husser said. “It strikes me that Elon has devoted tremendous resources and attention to making sure that there are moments of dialogue and that these dialogue are open to people of multiple sides.”

Through debates with the political organizations on campus as well as town halls, Elon has begun to
combat polarization.

“Elon also has a commitment to talk about issues even when they’re not necessarily the most comfortable to talk about,” Husser said.

Husser says the social divisions that push people apart through polarization are not unique to Elon since they happen in all college campuses because of what is caused by politicians in Washington. Though Husser is unsure if polarization will improve before it gets worse, he says that what can help this issue is if more people would participate in the primary elections.

Millennials constituted 19 percent of the voters in the 2016 presidential election. Husser believes that though this age group is willing to engage with the other side and have open dialogues, they still need to begin contributing even more when it comes to politics.

“When they start participating I have hope that we will see some solutions for this crisis in American politics,” Husser said. “My big hope is that students are spending four years being thoughtful about other people’s positions and that process will lead them to be the thoughtful leaders that we need in some ways to sort of rescue American society from a cycle of division.”