Just Weird Enough to Make the Forbes 30 under 30 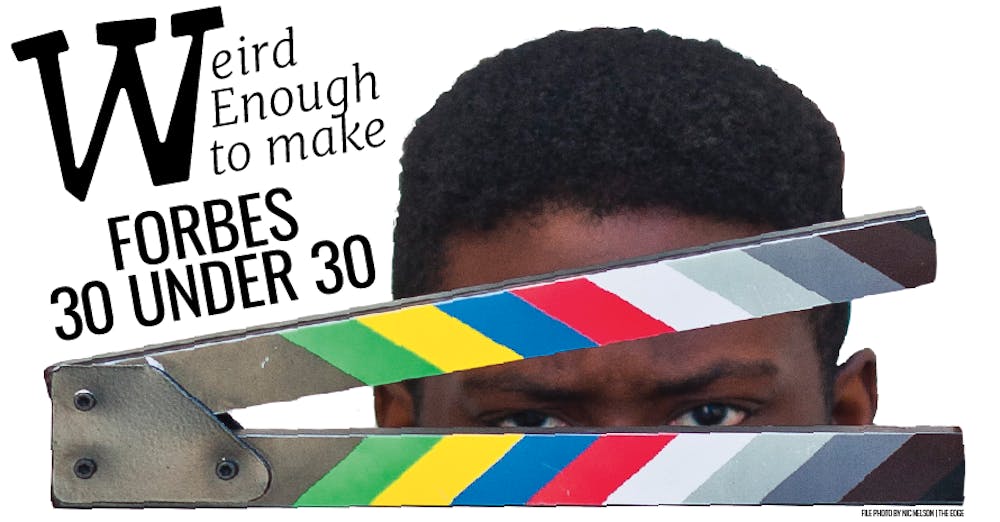 Elon alum breaks out on Forbes list for up and coming entrepreneurs with his company Weird Enough Productions.

Weaver started Weird Enough Productions as a junior at Elon. The 23-year-old says he always enjoyed writing and coming up with stories to tell. Weaver graduated from Elon with a double major in the BFA acting program and strategic communications. Though acting took up a lot of his time at Elon, Weaver was involved in Elon Tonight and spent time at the Center for Race, Ethnicity, Diversity Education (CREDE). But Weird Enough is what kept Weaver the busiest during college.

“I wanted to move straight forward into doing what I wanted to do,” Weaver said. “I was an acting and a communications major, and neither of those traditional paths seemed appealing to me at all. I felt that my perspective and what I have to offer was something that would get bogged down if I went down that path, so I decided to start my organization as a way to avoid that.”

Weird Enough Productions started at the Triple Impact challenge that the Koury Business Center hosts every semester. With $500 in winnings and an outpouring of support from faculty in the School of Business and School of Communications, the company was born.

One of Weaver’s biggest supporters at Elon was Naeemah Clark, an associate professor of communications, who studies diversity issues in the media industry.

“Tony is innovative, hardworking and has drive,” Clark said. “He knew what his passion was early in his time at Elon. He knows that a media literate society can contribute to racial understanding. That vision along with his writing and production talents make him a pivotal figure in the media landscape.”

And changing the media landscape is exactly what Weaver wants to do. He sees Weird Enough Productions not only as an educational platform, but also as a catalyst for social change.

“There were some personal experiences I had that made me feel like there was a need for an organization that had a big focus on media diversity,” Weaver said. “2014 is when things kind of achieved a critical mass in Ferguson, and that was something that highly influenced us. My team said, ‘Ok, now’s the time to move. Now’s the time for us to get things done.’”

“It’s all rooted in the fact that the media landscape that we have in the United States is not conducive to producing accurate information,” Weaver said.

He says we live in a media- inundated society, where the average American spends about 10 1/2 hours engaging with media content a day, makes media, and its biases almost unavoidable.

“Media is being used to promote ideologies that we know to be discriminatory, that we know to be harmful to minorities and in a lot of cases absolutely false,” Weaver said. “That’s when I think that it turns from a niche into a very pressing issue.”

To effectively combat this issue, Weaver and his team of five create mainly short-length videos they then sell to schools from an EdTech platform for kids to interact with and learn from. During National Media Literacy week, Nov. 6-10, Weird Enough Productions unveiled a new program to students.

“Seeing them look at characters, that we’ve been working with for the last few months, for the first time and really being excited about them was very rewarding for me,” Weaver said.

But running his own company has not come without its challenges. Weaver says that even entrepreneurship in and of itself is challenging.

“It’s a constant ebb and flow where you feel like you’re on top of the world, and you feel like the world’s on top of you,” Weaver said. “You can go from feeling like you have everything under control, to ‘I have no idea what I’m doing’ in the course of an email.”

He said that one of his biggest challenges has been standing firm in himself and realizing that, despite not having all of the answers, he is still equipped and capable of doing the work he does. Weaver says he often practices self-awareness and mindfulness. “It’s about being confident enough in yourself to know that your perspective and the thing you want to bring to the world is something that the world needs and wants to see,” Weaver said.

In January 2018, a web comic will launch along with a new podcast that is set to come out in a couple of weeks. Weird Enough is also working on the development of a longer, feature-length video. While the company’s objective is simply to get media literacy to as many kids as possible, Weird Enough has some more specific goals. By 2020, the company wants to be in all 50 states and to have served at least 32.5 million students.

Weird Enough has already reached 3,200 students, according to the Forbes website and that reach is part of what caught Forbes’ eye. Weaver had met someone associated with the Forbes 30 under 30 decision- making process at a conference and after hearing that he had made the list, was contacted by multiple people in his network who let Weaver know that they had nominated him. He didn’t even know there was a nomination process.

“I feel like it’s one of those things where you have to do the work — focus on doing the work — and someone’s gonna notice, and they kind of invite you to the table,” Weaver said.

Weaver said that it’s not the recognition that Forbes gives that excites him, but the opportunities that being on the list creates for Weird Enough. He said the most important form of recognition is when kids can look at Weird Enough’s content and feel represented.

“My mindset is: I feel very blessed to be given this platform and this opportunity to be around people who are pursuing social change. Therefore, what can I do with this now?,” he said. “How can I use this to impact more kids? How can I use this to make the world a better place?”