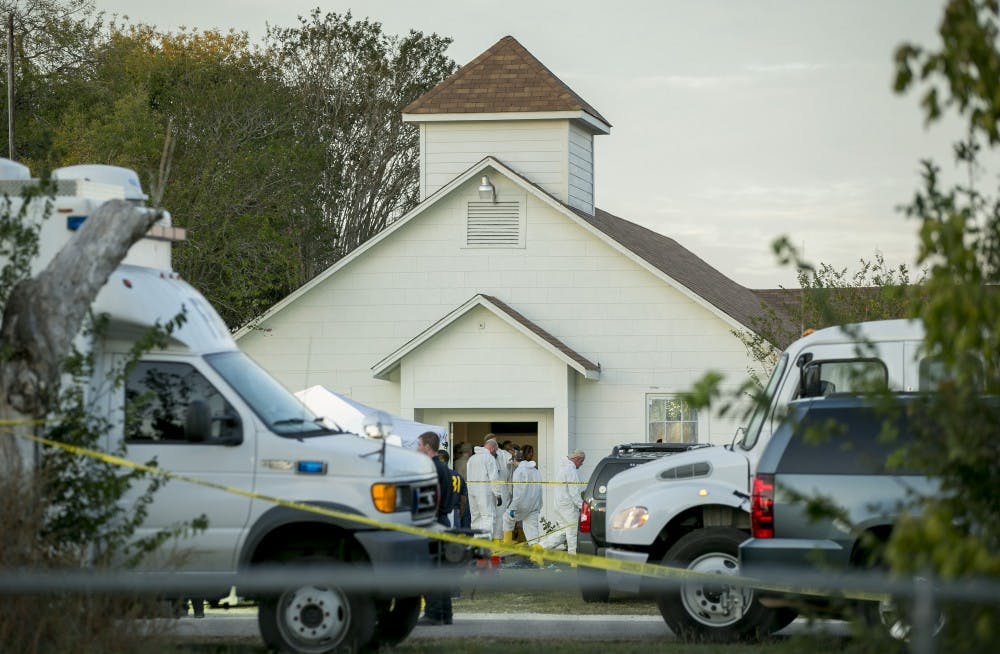 Investigators work at the scene of a mass shooting at the First Baptist Church in Sutherland Springs, Texas on Sunday, Nov. 5, 2017. Photo courtesy of Tribune News Service.

The United States experienced two of the worst mass shootings in modern history only 36 days apart; just over a month's time.

The slaying of 26 parishioners at a church in Sutherland Springs, Texas, on Nov. 5, along with the killing of 58 people at a Las Vegas concert on Oct. 1 shocked the country.

But, while many are mourning, the issue of gun control has reared its ugly head — again.

While these violent acts have contributed to speculations about guns, others believe guns are a form of protection in violent situations. Both sides of the spectrum are present at Elon University's campus and the Burlington community.

The set of laws and regulations in the United States which puts limitations on the buying, selling, manufacture, possession, modification or uses of firearms is known as ‘Gun Control Laws.’

Beginning with the National Firearms Act in 1934, there were laws that put prohibitions on gun ownership, setting the stage for future gun control laws in the country.

According to an article released by the Pew Research Center, the reasons why Americans own guns have changed, gun supporters are more politically engaged than opponents and 37 percent of adults reported having a gun in their household.

According to Elon University Republicans President Joshua Fritz, there are changes that could be made in order to provide a safer environment for United States citizens, while also owning a gun.

“The right to bear a gun stems from the right to self-defense. Law abiding citizens should not be infringed in that right. However, actually enforcing background checks for such sales is a credible change that I could see everyone moving towards,” said Fritz.

But Elon sociology professor said that other places in the world, like Australia, have decided to act on gun violence and have banned guns all together in the country.

While these opinions do tend to follow certain societal and political outlooks, there are still a lot of differing viewpoints that can be held within a pro-second amendment gun owner or an individual who believes that guns should not be sold.

According to the Elon Campus Safety and Police website, "Weapons are prohibited on campus or any university related events. Consequently, no individual on Elon’s campus is allowed to carry a weapon as a concealed carry or stored in their personal belongings in their dorm room."

While Fritz does believe that the right to bear arms stems from a mechanism of self-defense, he doesn’t believe that universities must hold policies that allow guns on college campuses.

“Elon is a private campus that can decide its own policies. In regards to public universities however, statistically they are some of the safest places in the United States. As long as the authorities can ensure the safety of the public area, then I am fine with the current regulation that bans firearms,” said Fritz

Though guns are not allowed on Elon’s campus, self-defense classes are offered in order to promote and teach personal safety and protection by using Martial Arts and Ju-Jitsu teaching methods.

As a self-defense instructor, Thomas incorporates fight scenarios in his classes without the use of guns.

“People that know how to fight don’t want to fight because that terrifies us. We know what can happen. Knowing how to fight is just a defense mechanism that you can carry with you. Violence is something you want to avoid,” said Thomas.

Thomas spoke about how self-defense and knowing how to protect an individual when necessary is similarly related to how guns should be used, only when needed and in a safe manner.

“A gun is just a tool. Sometimes I have students come out to my range and shoot with me and one of the things I do is set a gun down and it’s not chambered, but very safe, and we don’t touch that gun the whole time. We shoot a lot of other guns in a controlled atmosphere, and the gun that is just sitting there is not going to get up and shoot anybody,” said Thomas.

In Alamance County, there are several locations where firearms are bought and sold, in both chain stores, like Dicks Sporting Goods and Wal-Mart, as well as other privately owned businesses.

The Burlington Wal-Mart has a gun counter that operates as a gun seller and provider of information for people looking to purchase a gun.

Mary Claire Manson, a gun owner and seller, heads the counter. Manson previously worked at the jewelry counter before she realized that she wanted to help people learn more about guns.

“It helps to have someone that knows what they’re selling, especially when it comes to guns. I’ve probably quadrupled the gun sales since I’ve been there because I know exactly what the costumers are looking for. It doesn’t promote confidence to gun buyers when the seller is not experienced or knowledgeable about guns,” said Manson

Manson belongs to a range and goes shooting once a week to practice and said she believes that owning a gun and being responsible is directly related to how much you practice.

“When you train to use it right, you just feel more comfortable walking around to know if something happens, you are kind of prepared. You’re never going to be fully prepared for something bad that happens to you, and a lot of people who don’t practice with it or don’t train are probably not going to use it and are probably going to get hurt by it. The key is to practice with it.”

Drew Gerringer, a sergeant with the Gang and Violent Crimes Unit, has worked with the Burlington Police Department for eleven years. He works with crimes related to acts of violence in the community, including the use of guns on the streets and in private locations, and investigates the majority of shootings in the Burlington area.

Gerringer explained that the most prominent acts of violence involving the use of guns in the Burlington area are drive-by shootings, which have increased over the past year.

“Somebody gets mad about something and then they might shoot at somebody, and basically it’s retaliatory gun fire back and forth with each other. We have seen an increase of people’s houses getting shot up, cars getting shot up, people being shot.”

According to Gerringer, guns are used to specifically target an individual, and are derived from anger or hate.

“There was a shooting because somebody disrespected somebody on Facebook last year. People were shot because one group of individuals made fun of somebody’s girlfriend”.

While Gerringer said he has noticed the increase of active shooting on the street, he does believe that there could be an improvement in reducing incidents involving guns by even the help of a neighbor.

“The entire thing about gun violence is that the reason why gun violence occurs and reoccurs is the lack of community involvement, in my opinion. There is a code in certain neighborhoods and societies where they don’t talk to police, you don’t talk to them, it’s there job to figure it out," Gerringer said. "Unfortunately, that’s how we do our job, we can’t just go out and come up with a person’s name. The way that we figure things out is talking to people who saw it or know people who saw it.”

The Burlington police department has implemented several programs over the past couple of years to keep members of the community aware of violence related to guns.

Gerringer said most guns involved in crimes are incurred illegally.

“If somebody breaks into a house and finds a gun, they can take that gun and then they can resell it on the street. Most of the guns that we encounter are already illegal, it’s just a matter of getting them off the street and back to the people who have the legal right to have one”.

As a member of the law enforcement, Gerringer said that guns are “the necessary evil”, and that he wishes he could come to work everyday without a gun, but that is not the society we live in.