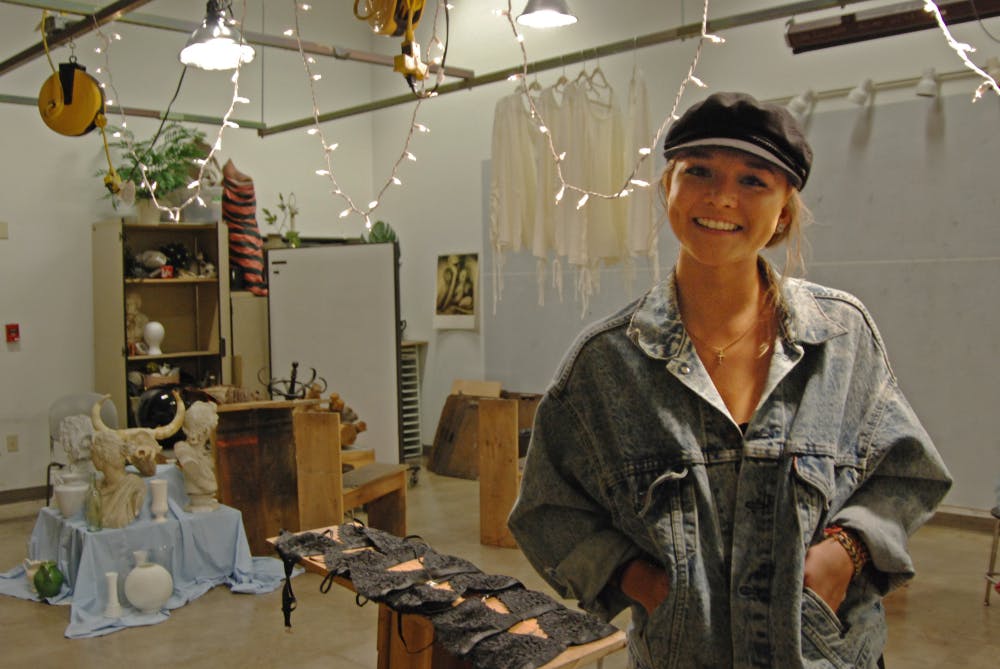 Brooke Lowery at her pop-up shop in Arts West on Oct. 25 where students could catch a glimpse of Lowery's new clothing line. Photo By Sophia Ortiz.

Elon University’s Brooke Lowrey was 10 years old when she first realized she wanted to incorporate her love of fashion into her own personal brand.

Brooklynn Street, Lowrey’s blog, began in 2010 when Lowrey was still in high school.

“I was stuck in high school, but I knew I wanted to do something bigger and better,” Lowrey said. “It has progressed as I have. I have always loved fashion. I have been obsessed with these fashion bloggers and followed them from when they first started out to now.”

Her obsession with blogs is what ultimately inspired Lowrey to create her own.

“It started as a very fashion-based blog,” Lowrey said. “As I grew up, left high school and had a change of scenery is when it eventually evolved into a motivational and inspirational type of blog.”

The brand Lowrey built began to bridge her love for fashion with her want to empower women. Her foundation for the brand was to empower women to be their most authentic selves.

Lowrey always thought about starting her own clothing line, and last summer she finally decided it was time to do so.

Brooklynn Street currently has five pieces in the line. Lowrey wants to start out small to see how far it can go before she adds more pieces. Shoppers can find a toluca tie top, a Bel-Air bay bra, a cozy Cali cardigan, a rose ruffle dress and an arcola slouchy sweater that range in price from $45 - $75.

“The big and main focus of Brooklynn Street is all essential and classic pieces,” Lowrey said. “An all encompassing style that I am selling or you can incorporate something of yourself. It is for the modern day badass.”

Brooklynn Street officially launched as an online store Oct. 27. Originally, the site was not going to go live until Nov. 1, but Lowrey decided she wanted to launch early.

The launch date of Nov. 1 was picked by Lowrey specifically because of the significant effect the time of the year has had on her life.

“November has been my special time and month,” Lowrey said. “It is six months after my birthday, and I am not particularly religious, but it is the day after Halloween, which is the Good Day. It is also a few days before the anniversary of the death of my grandmother.”

While the store is mainly based online, Lowrey had a pop up shop Oct. 25 at Arts West.

She is hoping that Elon University students will be able to interact with her brand while she is still on campus.

“It was amazing and a lot of fun to be able to show off all the clothes and to show my brand to Elon students,” Lowrey said. “I got a chance to feel it out, but I think it went really well, and I want to continue to do this on campus.”

Lowrey has been developing her brand on her own, but she loves to collaborate and hopes to be able to keep doing so as it has created more inspiration and creativity for the brand.

Her dream collaboration would be with Mary-Kate and Ashley Olsen. She was able to collaborate with many others when she was with The Edge Magazine, where she was fashion editor and editor-in-chief. She was with the magazine for a few years, but she left to continue to put more work into Brooklynn Street.

“It was kind of just the next step of things,” Lowrey said. “I took all my focus, all the creativity and energy to flip it to my own company. It was a natural progression after handing off my position.”

Friendships are also a form of collaboration for Lowrey. She enlisted Emilie Van Blarcom, whom she met through the Elon in Los Angeles program to be her videographer.

“It’s been really fun to be involved,” Van Blarcom said. “I am a film student and she knew that and reached out to me to do some videography work for the shoot. It was just a laidback, chill environment. She is one of my closest friends now.”

While Lowrey and Van Blarcom have not been friends for very long, they were able to become close quickly. Lowrey first shared her vision and brand with Van Blarcom over dinner.

Lowrey wants to emphasize that while the brand is the clothing line, it is also an outlet for women to empower one another. Already, she has many plans for the future of Brooklynn Street.

“I really want to expand the clothing store,” Lowrey said. “One of my biggest focuses is to have it expand to be a multimedia platform for girls, almost like a modern magazine. I want it to be a community for girls to talk to one another and be able to control the content that they want to see.”

As the brand grows, Lowrey wants the main message of empowerment to be prevalent.

“We try to be a really authentic brand that is empowering other girls to be their most authentic self,” Lowrey said. “Clothes should make you feel better. They should be your personal self-accessories.”