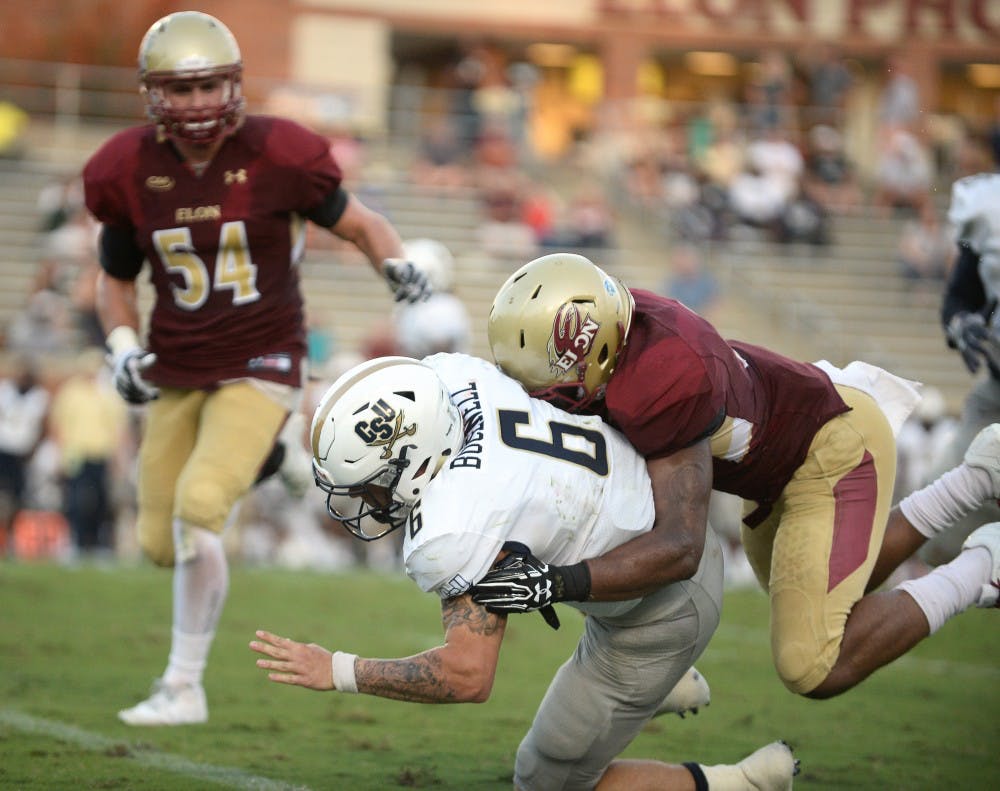 The Elon University football team enters this weekend with a loss in its rearview mirror. It is the first time its been in that situation since the first week of September.

This season has been defined by surprising wins, with each week adding another mark in the win column and another chapter to the saga. But now, with a 16-6 loss at the University of New Hampshire on Nov. 11 in the books and a matchup against national No. 1 James Madison University coming up this weekend, the momentum may be slowing.

With Elon’s first Football Championship Subdivision (FCS) playoff berth since 2009 all but guaranteed, now is a dangerous time to be losing momentum.

The New Hampshire game exposed some of the ways the Phoenix can falter in the face of talented opponents. There were a few signs of the Elon team that had given so many Colonial Athletic Association (CAA) teams a scare this fall. All season, it has taken down ranked teams by the skin of its teeth, sealing its eight victories by an average of less than four points each game.

All of Elon’s wins saw the Phoenix come from behind or narrowly avoid squandering an early lead. Against New Hampshire, Elon did not score until the fourth quarter. Three turnovers and missed opportunities piled up, leaving UNH in the driver’s seat all game.

Only one game stands between Elon and the playoffs, and there is no time left to miss opportunities — especially with James Madison University coming to town.

The Dukes will visit Elon for a game they are used to winning. In the past three matchups, JMU has led Elon in scoring 173-41. In short, Elon has never given the Dukes a scare.

But this could be the year.

Before the loss to New Hampshire, Elon and JMU were tied at the top of the CAA standings. The Dukes, last year’s FCS national champions, were continuing their winning ways. Elon was in the midst of its headline-making, expectation-shattering season.

This Saturday, Nov. 18, the two will clash at Rhodes Stadium in the final game of the season, and Elon will have to dig deep to collect its first-ever win over the Dukes. Elon has not seemed to care much for precedent this season, pulling off upsets and surprising opponents since September.

Regardless of Saturday’s score, the contest will be Elon’s last chance to tighten the screws on a team that has played its fair share of too-close-for-comfort games. Even if the Phoenix were to end the season on a two-game skid, it would almost certainly have its earlier efforts rewarded with a spot in the playoffs.

Any team that Elon might encounter in the playoffs will be there for a reason. The playoff bracket features an elite selection of 24 teams, most of which are coming off banner years of their own. Much of the competition will finish the season with only one or two losses, and a strong appetite for more.

Those teams will not leave any margin for error or missed opportunity.

As Elon enters the home stretch, it has one last chance to make sure those errors disappear in order to make sure it is ready to seize every opportunity. With its hardest tests of the season still to come, and the possibility of an even harder test immediately after, Elon needs to be the team it was against against Richmond and Villanova — not the team it was in New Hampshire.