Elon graduate strives for a world without hunger 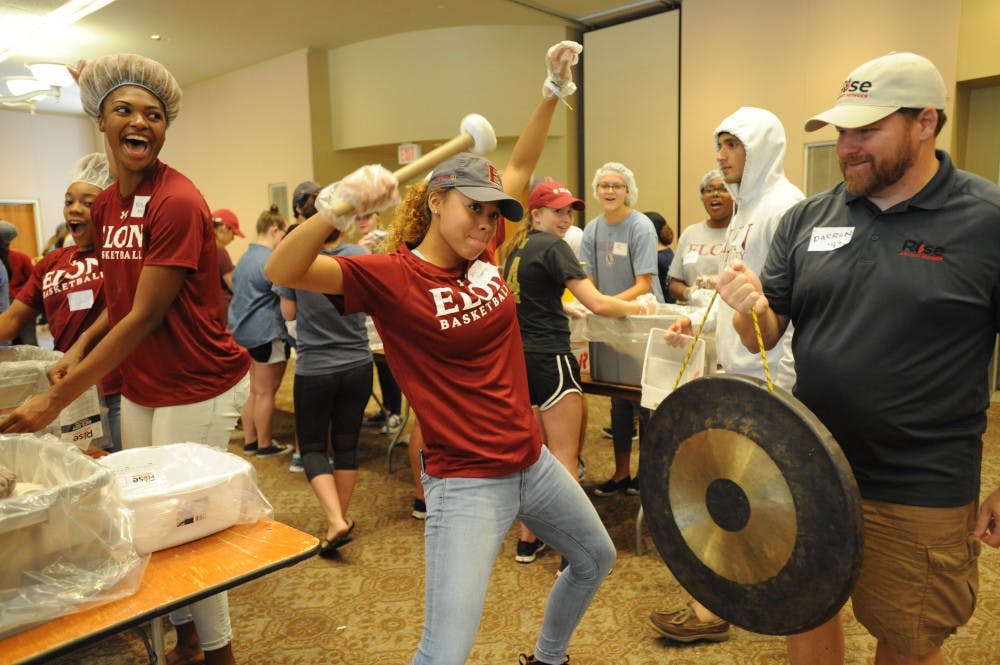 Darron Stover bounced around McKinnon Hall earlier this semester, gong and microphone in hand, searching for anyone who was excited to be awake early on a Saturday morning.

The task is easier than it sounds — the energy in the room is palpable. He finds the perfect person to strike the gong: an Elon women’s basketball player who is singing and dancing to “The Cupid Shuffle” while pouring a cup of rice into a funnel. The sound resonates through the space and induces cheering among the volunteers; after all, that’s another 1,000 meals packaged.

Stover is the community engagement manager for Rise Against Hunger, a nonprofit founded in 1998 with goals of ending hunger and ensuring food security for all. Though he serves many roles with the nonprofit, a large part of Stover’s job is planning and executing these meal packaging events. More than 250 volunteers helped package 34,000 meals that morning for students at St. Andre School in Mithon, Haiti.

Rise Against Hunger was founded on a belief shared with the United Nations — the belief that hunger is one of the biggest obstacles to progress.

“I think it’s legitimate to say we can effectively end chronic hunger by the year 2030,” Stover said. “There’s a lot of challenges to it. Conflicts might arise. Climate change is certainly making it harder. But if you don’t set a timeline for it, then you don’t push forward with the gusto that you need to actually do it.”

Stover has not always had a fervent passion for ending hunger. After graduating with a business degree from Elon in 1993 and earning his Masters of Business Administration in 1995, he became an investment consultant at a boutique firm called Banyan, Rock & Talent.

In 2005, Stover’s focus in the business world began to change. After some thought, he arrived at the idea of helping clients make socially responsible investments. By 2007, Stover started his own company, Invest for Change, LLC.

“I wanted to create something that matched my passions and my values,” Stover said. “It helped me sleep better at night in an industry that’s not always the most upright.”

While he was working in the business world, Stover was also volunteering with Rise Against Hunger.

“Darron became what we call in the nonprofit world, a ‘super-volunteer,’” said Rise Against Hunger founder Ray Buchanan. “If we needed him, he was there. “We were doing our very first million-meal packaging event at North Carolina State University. My first memory of Darron is him working that event, loading a truck. He was on that truck all day long, and it was not a cool day, but in the truck it’s like an oven. He never gave up, he stayed on the truck and made it happen. From the first time I met him, he’s been that kind of guy. He does anything it takes.”

After volunteering with Rise Against Hunger for nine years, Stover started working for the nonprofit full time in 2014.

“For me, working to end chronic hunger is a bigger thing to dedicate my life to than how many open spaces we have in the city of Raleigh,” Stover said.

Today, Stover applies what he has learned from more than 20 years in the investment business to his work at Rise Against Hunger.

Stover’s coworkers feel his background in business has been advantageous to the operation of Rise Against Hunger.

“Darron’s background in the business world gives him an advantage in his work because he is consistently looking for opportunities to increase our efficiency as well as making smart business decisions that can impact our bottom line,” said coworker Jeff Gonder. “He is also adept at building relationships with strategic partners to help grow our movement. His background in business enables him to understand how to talk to businesses in their language.”

As one of 20 locations around the country, Stover’s warehouse in Raleigh offers services to locations from Greensboro to Rocky Mount. For all packaging events, each warehouse is responsible for setting up, planning, facilitating, bringing supplies and giving speeches.

First, Stover provides statistics on hunger. Next, he has volunteers demonstrate how to pack each meal with rice, soy, vegetables and 23 essential vitamins and minerals. Then the magic begins — assembly lines of volunteers package thousands of meals to be distributed to those in need, all across the world.

Packaging events may be centered around creating meals to feed the world’s hungry, but they also give volunteers the opportunity to become educated about the effects of hunger.

Freshman Lucia Lozano-Robledo, who participated in the meal packaging at Elon on Sept. 9 this year said, “I think the event was really well-organized. You don’t have to go in knowing much about the idea. Darron’s slideshows helped me understand the problem of hunger not only, globally but also locally. The event gave me a lot of perspective. We are very privileged at Elon, with the nice dining halls. A mile away, a lot of people live in poverty and suffer from hunger.”

Stover’s coworkers agree that the facts shared at meal packaging events are grim, but they recognize that he has mastered how to deliver the sensitive information.

“Darron is very passionate about our mission,” Gonder said. “He has a great sense of humor that enables him to lighten the mood when talking to groups about some of the stark facts surrounding hunger. He knows how to read his audience to focus on relevant information that will best engage each individual group.”

Buchanan attributes Stover’s success with the organization to his big heart.

“He’s got a real heart for helping,” Buchanan said. “That defines him for me. He loves his family, of course, but he loves everybody. He knows how to get the best out of everybody.”

Since 2005, Rise Against Hunger has packaged more than 342 million meals that have been shipped to 74 different countries. While there is still much to accomplish before achieving zero hunger, Stover is optimistic. In the three years he has been with Rise Against Hunger full time, he has watched food insecurity decrease by 20 percent.

“We say that 793 million people go without food on a daily basis, but the reporting three years ago was that it was over a billion,” Stover said. “There are 200 million more people who are not suffering from food insecurity anymore, even with population growth. How amazing is that?”