Elon falls to Furman in first round of FCS playoffs 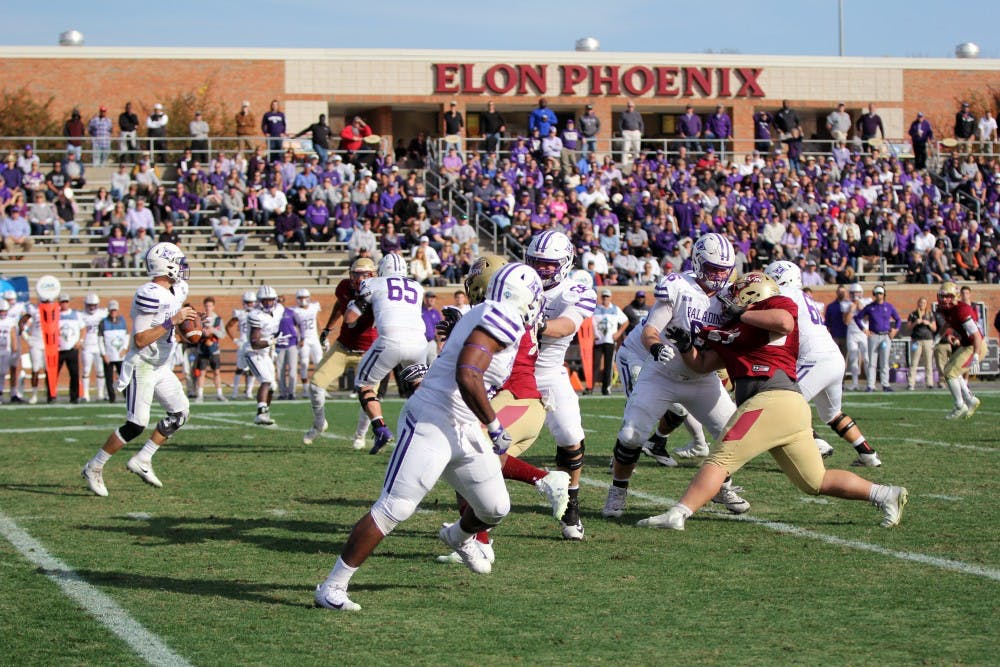 A blocked extra point was the deciding factor Saturday as the Elon University football team fell in the first round of the Football Championship Subdivision (FCS) playoffs to Furman University, 28-27.

In a game that witnessed three lead changes and eight touchdowns, No. 15 Phoenix was upset by the No. 22 Paladins in Rhodes Stadium.

“It was a good football game for the fans to watch, that’s for sure,” Elon head coach Curt Cignetti said.

Elon took the lead midway through the first quarter when a punt by Elon’s freshman punter Hunter Stephenson was mishandled by Furman’s Thomas Gordon. It took just one play for the Phoenix to put points on the board after that, as freshman running back De’Sean McNair blasted through the Paladin defense for the 26-yard strike.

McNair hobbled off the field on the next Elon drive, but returned to the game shortly thereafter. He finished the day with 101 yards on 15 carries, three of which went for touchdowns. It’s the first time that an Elon running back has had three touchdowns in a game since A.J. Harris did it against Chattanooga in 2010.

The Elon defense looked to be stifling the Paladins, who didn’t record its initial first down until 41 seconds prior to the end of the first quarter.

After the break between quarters, the Furman offense came out pounding. In what seemed to be a newfound rhythm, the Paladins scored on back-to-back drives in the second quarter. Both were scored by senior tight end Andy Schumpert, who collected the 6-yard pass from senior quarterback P.J. Blazejowksi for Furman’s first points and was the target on a 70-yard touchdown pass on the following drive.

The latter took just three plays and 55 seconds and left the Phoenix facing a 14-7 deficit. Cignetti was not pleased with how his team performed in the first half.

“It was back and forth and I wasn’t really pleased with the way we played in the first half,” Cignetti said. “I didn’t think we were playing our kind of football.”

Furman was almost able to capture another two points after tackling Elon’s freshman quarterback Davis Cheek, but it was ruled that Cheek made it to the 1-yard line and Elon was forced to punt at the back of its own end zone.

After starting the ensuing drive on Elon’s 38-yard line, Elon’s defense was able to come up with a big stop on a Furman drive that would’ve given them three touchdowns in four drives.

Elon entered the half, down seven. Davis Cheek was lackluster in the first half, completing only seven passes for 53 yards.

Elon came out of the locker room invigorated for the second half. After the defense forcing a 3-and-out, Elon marched 79 yards down the field, ending in a 16-yard touchdown completion to junior wide receiver Corey Joyner. Cheek had 66 passing yards on the drive, exceeding his total for the first half by 13.

On the ensuing kickoff, senior defensive back Chris Blair forced and recovered a Furman fumble, giving Elon a fresh set of downs deep inside the Paladins zone. The Phoenix was able to capitalize on the fumble, collecting seven points off of a 3-yard touchdown run by McNair.

“I think we just got back to playing football the way that we have all year,” McNair said. “Like coach said, the first half wasn’t really our brand of football. So when the second half started, and we started fast, I felt like at that was a point where we were going to take the game over.”

Elon was able to put up 14 points in the first half of the third quarter to take a 21-14 lead.

Furman scored 14 unanswered off of two rushing touchdowns from Antonio Wilcox, the first from 14 yards out and the second on a 62-yard explosion in the backfield. The Paladins took at 28-14 lead.

“I think we got a little smarter as coaches but it will be interesting to go back and look,” Furman head coach Clay Hendrix said. “I think anytime you play a team a second time – they did change a few things as we did – we didn’t handle some of those adjustments as well early.”

Elon was able to score on the following drive after a blitz from the Paladin defense left a large gap for McNair to run through. The 28-yard strike looked to be the tying score for the Phoenix, but after the extra point was blocked, Elon still was facing a one-point deficit.

Down seven with just over four minutes remaining in the game, Cheek entered the game with the hopes of producing a game-winning drive like he did in the previous matchup against Furman earlier in the season.

“When I’m about to go on the field, I’m not thinking much … just trying to do my job,” Cheek said. “It’s one of those things that we have to convert on more plays here and there and it’s completely different. If I make a better throw on that fourth down we can get down there and kick a field goal to win.”

The loss is Elon’s third-straight to end the season, all three coming to teams that are in the FCS playoffs. The Phoenix are now 0-2 in FCS playoff games, still searching to make their mark on the national stage.

The Phoenix finishes the year with a 8-4 record, a big jump from the 2-9 slate that previous year’s team put up. It’s Elon’s first winning record since 2010.