After Duke game, Elon has to place value on the little things

Playing the No.1 team in the country showed the Phoenix the areas it needs to improve on going forward. 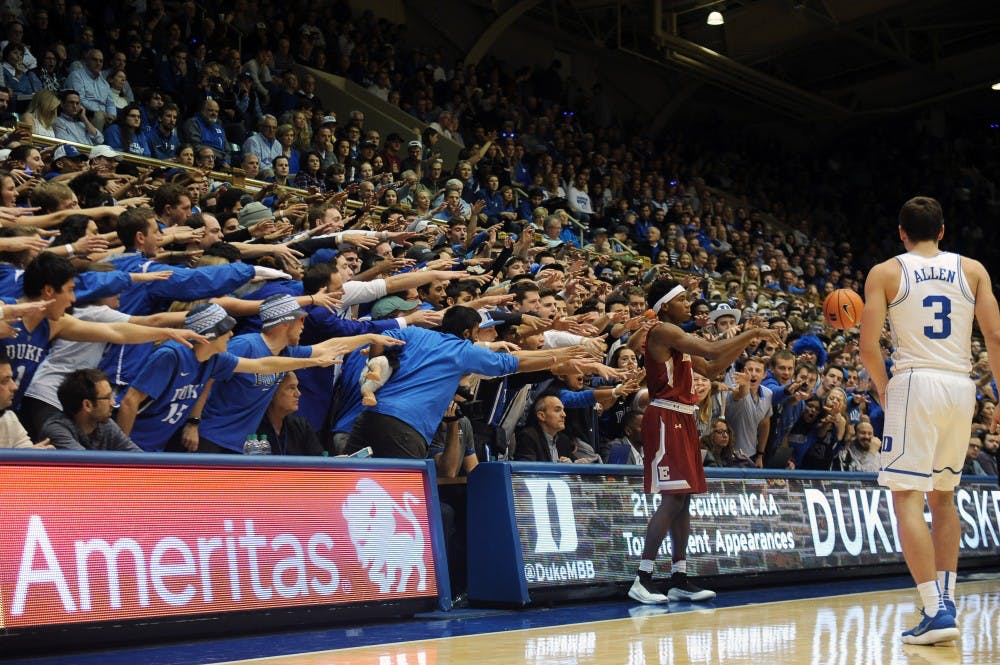 DURHAM — If the Elon University men’s basketball team can glean a slimmer of hope from its game against Duke University, it’s that it doesn’t have to play the Blue Devils again.

The 97-68 tromping the Phoenix endured in Cameron Indoor Stadium on Friday will not happen again this season. It’s over. But the lessons Elon learned in that game will affect its season.

Elon will not play anyone as talented as Duke again this season. This past spring, Duke hauled in the nation’s top-ranked recruiting class encompassing two 4-star and four 5-Star recruits. None are more valuable than freshman forward Marvin Bagley III, who scored 25 points against the Phoenix, a new record for a Duke freshman in his debut.

For the remainder of the season, Elon head coach Matt Matheny won’t have to mentally outwit a coach with the caliber of Mike Krzyzewski, the winningest coach in NCAA history with 1,000 wins at Duke, five national championships and five Olympic gold medals.

But even if the Phoenix never has to lace up against Duke again until possibly the 2018 season, Matheny said his team has to fix the aspects the Blue Devils exploited. They weren’t big things – they were little.

But against a team of that level, everything is crucial.

“What you hope is that when you have an experienced team in this kind of environment and that kind of talent you’re playing against that it doesn’t get magnified,” Matheny said, who is in his ninth year at Elon. “I feel like part of it was it’s the first game and we just so happened to select the number one team in the county on the first game. So your mistakes are magnified. But then part of it is a lack of understanding how valuable little things are. And with a veteran team, you should know that and we didn’t do it.”

Aside from Grayson Allen’s infamous trip of Steven Santa Ana, last year’s Duke vs. Elon game quickly garnered national attention because the Phoenix was up 35-34 against the No. 5 ranked team in the country before they lost 72-61. In the opening period, Elon drained seven 3-pointers, while Duke only shot 21 percent from behind the arc at halftime.

This year, though, things were different.

“I thought Allen’s threes early in the game really set the tone,” Matheny said. “Those were big shots. What we told our players after the game was even though we have an experienced team and we have a veteran team, you have to place an incredible amount of value on the little things.

“When they made those shots early, you have to value bending your knees and buckling down in adverse times. We didn’t do that and the spread got away from us a little bit.”

But when Elon sprinted to the perimeter to defended those shots, it left the 6’ 11” Bagley guarded alone under the rim by Elon forward Tyler Sebring, who is three inches shorter and and almost 10 pounds lighter than him. Guard Dmitri Thompson, who led the team with 13 points, said he is somewhat culpable for Bagley’s scoring because he was occupied with Allen, which put Sebring, who had 11 points, in a tough matchup.

“I take blame for a lot because instead of digging and helping Tyler on the block, I was helping with Grayson,” Thompson said. “I had to stay committed to the scheme.”

In college basketball, it is rare for a team to have such a balance of size and shooting ability as Duke. Just like the NBA, teams are moving to rely on speed and shooting, using their wing players to dictate their offense. It’s an added blessing to have a dominant presence down low. The Blue Devils scored 52 points in the paint compared to Elon’s 20.

But Elon’s strength isn’t its size. As seen last year, if it shoots the ball well, the Phoenix is competitive against anyone. But in Cameron, notorious for having a rowdy fan base, Matheny said their shots were rushed, which made them difficult to hit. And on many occasions when they missed those shots, it led to fast break points. Duke scored 19 points on breaks. Elon scored none.

“I thought offensively, we rushed,” Matheny said. “We took the first open shot or anything close to being open, particularly in the first half, but we did it some in the second half. If we thought we were open we took it, and we took some bad ones that led to run outs for them and we took a lot of unbalanced shots.”

“When we took our time and passed up an OK shot for a great shot, we got some good looks and we knocked them down.”

Matheny preached that he has a veteran team. Elon returned its top five scorers from last year, and with a familiar locker room and chemistry, he’s confident they will have a successful season.

While the season just started, the team is in the thick of its out of conference schedule. Elon will not play a Colonial Athletic Association opponent until it meets Drexel on Dec. 30.

Last year, the Phoenix made an early exit in the CAA tournament, losing to the College of William & Mary 71-66. Thompson said he hopes this season will be different and the Duke game was a great evaluation for their upcoming slate. The mistakes they make in conference won’t be as exploited as they were at Duke.

If they fix the little things, Thompson said they will be fine.

“Obviously they’re the best team in the country with a lot of talent in every position,” Thompson said. “It just gets us prepared for the grueling schedule we have coming up and when we make it to the in the conference tournament it is games back to back so we’re just getting ready for that.

“It was a great test coming out in the season.”