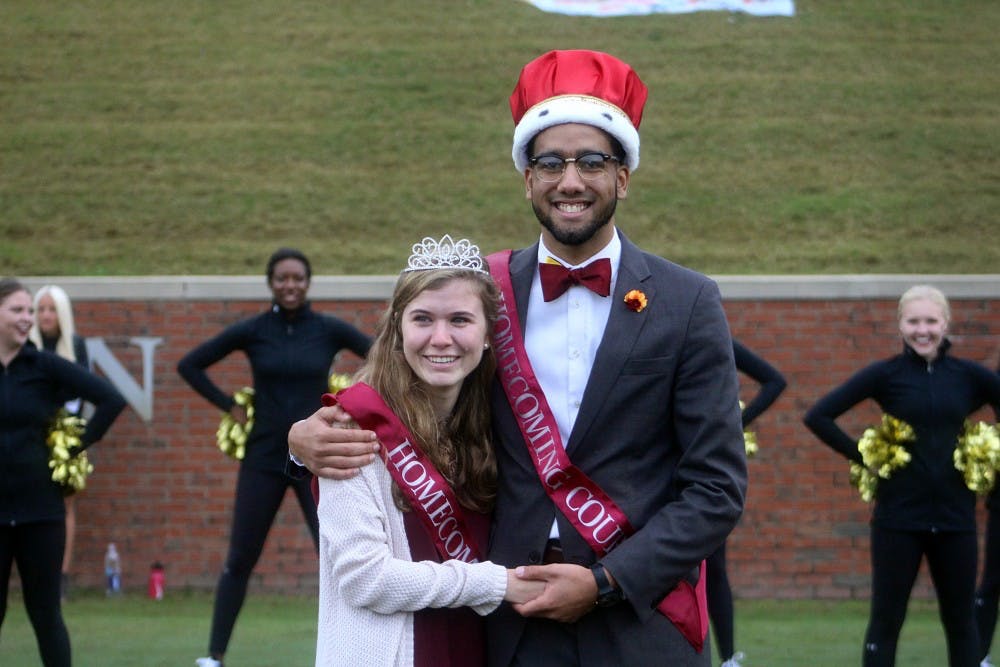 
Alonzo Cee and Gabby Vance were crowned Homecoming Royalty during halftime at the Elon vs.  Towson football game Saturday afternoon.

Under a mist of rain and the bright lights of Rhodes Stadium, Gabby Vance and Alonzo Cee were crowned Elon University’s 2017 homecoming royalty during halftime at the Elon vs. Towson game last weekend.

The two seniors, selected from a group of 19 on the court — 15 females and four males — felt shock simultaneously and elation. Cee was surprised to the point he wasn’t sure if he had heard the announcer right.

“I walked out very slowly because I was sort of shook,” Cee said. “I just didn’t know what to do.”

Both seniors agree that this year’s court represented some of Elon’s best students. Cee and Vance said every member of the court gives their all to the community of Elon and deserved this recognition.

But the day was about so much more than that.

“You don’t run for yourself, but you run for the Elon community,” Vance said. “Picking a philanthropy that you really care about and having that be your drive and motivation makes it so that it’s not about you in the end. It’s about Elon as a whole.”

Gabby Vance, a political science major from outside of Annapolis, Maryland, ran to support suicide prevention. Vance said that in high school, a good friend died by suicide, something that has affectedVance’s life since. She said it is an issue that has come up each year during her time at Elon and is something that is more relevant now for the Elon community than ever.

“I know so many people that have been affected by this, and hopefully this is providing some people with just a bit of peace,” Vance said.

Senior Hannah Clifford, one of Vance and Cee’s biggest supporters throughout their quest for homecoming royalty, found Vance’s choice in charity to come at just the right time for Elon’s community following the death of student Breslin Wiley. Wiley died unexpectedly on Oct. 28. Town of Elon Police are investigating it as an “incident of self harm.”

“She wanted to win for the sole reason of showing support for the hundreds of students on campus who had lost a friend, a teammate or a brother,” Clifford said. “Moments like that are the times that we get the chance to see who someone really is. She shows love and respect and greater sense of duty toward this institution, and all the people associated to it, than almost anyone else. And on top of that she has a heart big enough to fill up the whole damn football field.”

For Vance, winning had nothing to do with her and everything to do with her philanthropy. She was hesitant about running until she learned she could run with a philanthropic organization. When her name was called as the winner, Vance said she couldn’t hold back the excitement, shock and love she was feeling. Vance walked across the field to receive her tiara with eyes full of tears.

“I think I cried just because my philanthropy is so important to me,” Vance said. “Just to get awareness out about suicide prevention means so much to me, and even more than myself, just benefiting all of Elon’s community meant everything to me.”

Not only is Vance a suicide prevention advocate, but she is also a Leadership Fellow, an New Student Orientation Leader, a member of the Epsilon Delta chapter of Delta Delta Delta sorority and a part of Intervarsity Christian fellowship. She says one of her most formative experiences was found working as an orientation leader. This experience allowed Vance to view the complex transition into college over many years and work with a variety of students.

“It just really has shown me all that Elon has done for me, and I think that’s really special,” Vance said.

Though she’s an outspoken member of Elon’s community today, Vance says running for homecoming royalty is something she never would have thought about four years ago. She first set foot on Elon’s oak- lined paths as a shy freshman, noting that homecoming royalty wasn’t really a part of her personality.

“I would have never done something like this in high school, but throughout my time at Elon I have felt so much love and encouragement,” Vance said. “This school has given so, so much to me, and I’m happy to finally feel like I’ve given something back.”

One of the members of Elon’s community who supported Vance, even escorting her onto the football field on Saturday, is senior Devon Spieker.

“Gabby Vance is honestly one of the most incredible people I’ve met in my life. As a role model in my own life, she has a certain kind of compassion that makes anyone who’s talking to her feel important and unique,” Spieker said. “She is dedicated to Elon through her many involvements and in normal, everyday moments. I couldn’t have imagined a better fit for the court.”

“This was a really good way to say to our brother, ‘We’re still thinking of you even though you’ve graduated, and we want to raise as much money as possible to continue the legacy of your father,’” Cee said.

While Cee is involved in fraternity life, he said one of the things that makes him different is the expansive amount of dedication he has in different areas of campus. He started off with club baseball and worked with WSOE, the campus radio station. Cee now works as a tour guide, a part of the inclusive Community Council, and as a Greek Life Senator for SGA. He also served as president of the National Pan-Hellenic Council last year.

“I’ve basically been all over the place, and I pride myself in having friend groups in different areas on campus and being able to talk to people and build relationships,” Cee said.

Others have noticed Cee’s involvement around campus, too.

“He has done amazing things for NPHC, SGA and in his everyday life, and shown to be a true leader in the community,” Clifford said.

Cee, who says he generally walks with confidence, found himself unsure in the moments before the Homecoming Royalty winners were announced.

“With this I was sort of skeptical about myself winning. I was very surprised that my name got called,” he said.

Despite the nerves and uncertainty, one thing that Cee has never doubted is that he is supported at Elon.

“I have been shown such love that I just wanted to be able to give back,” Cee said. “I feel thrilled to be able to represent Elon and have had such great support from the beginning.”

One of the biggest endorsements echoed by both Clifford and Spieker is how driven, lovable, passionate and kind both members of homecoming royalty are.

“It has truly been a dream come true. I never would have expected this and just feel so loved by everyone. It was honestly one of the best days of my life,” said Vance.