Failing Forward: getting to know Caroline Dean, the face behind Phoenix Flops 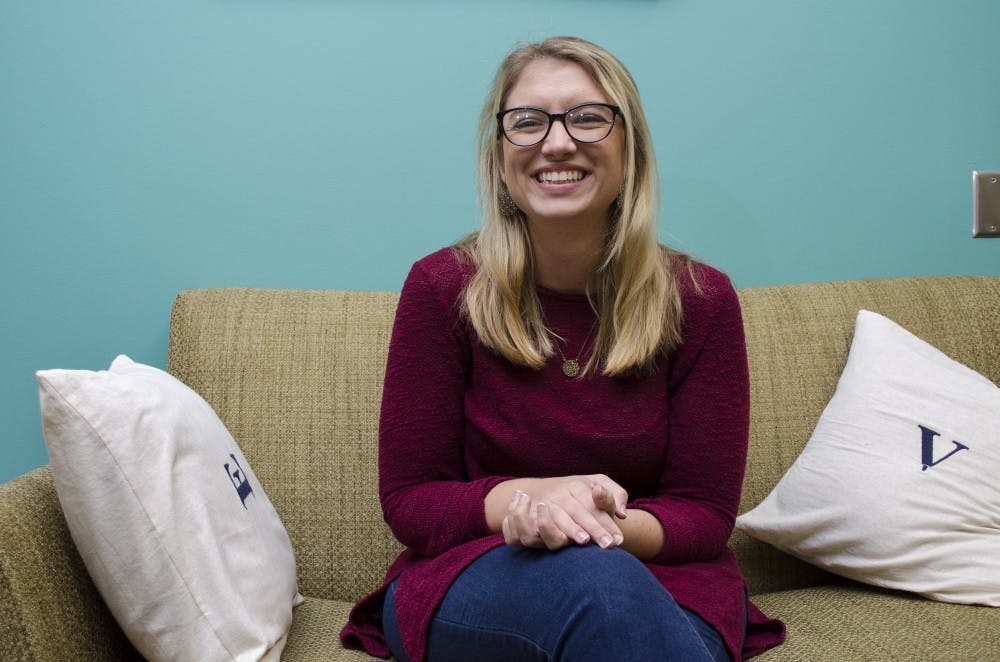 
Senior Caroline Dean will wrap up her time at Elon University with a long list of accomplishments, but her most recent endeavor focuses on students' "flops."

When senior Caroline Dean scrolls through her Instagram page, she believes people are only showing the “perfect” part of their lives. For Dean, it has been her mission to change that.

While most Elon University students have likely seen Phoenix Flops on their Instagram feeds with stories of failure, not everyone knows the face behind the movement.

In her fourth year at Elon, Dean juggles school work with multiple organizations. She works as an office manager for Elon Volunteers, is an apartment manager for Residence Life, and is a small group leader and worship coordinator for InterVarsity Christian Fellowship. In addition, Dean is a member of the Presidential Student Leadership Advisory Council, and served recently on the the Presidential Search Committee, which recently selected Connie Book for president after an eight month search.

What some people might not know is that Dean is also one of the co-founders behind a recent movement on campus: Phoenix Flops.

“It’s a creative celebration of failure,” Dean said. “We are on a mission to find out how failure pushes people toward success.”

While Dean is a leadership figure for many on campus, she admits that her own fear of failure has stopped her from pursuing various interests at Elon.

“Elon students aren’t resilient because they’re not allowed to fail,” she said. “That’s just not part of our culture. It’s really shamed if you do, so they don’t try things.”

But despite this fear, Dean says failure is unavoidable.

“Everyone has a very specific definition to their own life,” she said. “For me, my definition of failure is not trying something out of fear, or not pursuing something or someone because of fear.”

Dean says her biggest failure at Elon came sophomore year when she applied for the Lumen Prize – Elon’s largest scholarship for undergraduate research – and was rejected.

“I really had a semester – if I’m being frank – of just spiraling downward,” Dean said. “I was so confused. I was like, ‘What do I do?’ My identity as a scholar has been ruined.”

In that moment, Dean says she felt inadequate compared to her peers. She felt as though she had dedicated too much of her Elon career to academics and not enough time forming close relationships. She thought about giving up on her research – and even dropping out of school completely.

“I distinctly remember talking to my professor and saying, ‘I don’t think I can do this anymore,’” Dean said. “And she said, ‘Caroline, this is when you decide who you are going to be, and I know that you are not a quitter.’”

But at the time of rejection, Dean didn’t realize this as the defining moment that would lead to the creation of Phoenix Flops.

The formation of Flops

Dean explored failure further during her junior year through her work on the Presidential Student Leadership Advisory Council. The council consists of a group of student leaders who meet regularly with President Leo Lambert and senior staff to discuss issues on campus, initiatives and plans for the university.

At one meeting, the council had a discussion on failure and resilience at Elon – something that piqued Dean’s interest.

“I’m really interested in risk and failure in college students, and how that’s allowed in academic curriculum, how that’s involved in college campuses,” she said.

As a senior at Elon last year, Elon admissions counselor Tyson Glover sat on the advisory board with Dean. He shared a personal experience with failure with the board about when he tried out for Elon’s swim team, not knowing how to swim.

“Long story short, I literally had to be saved by the lifeguard,” Glover said. “I literally had my Phoenix Flop because I tried to dive in the pool and belly flopped. It was just horrible. But it paid off. I came back, made a lot of friends and I’m glad that now I know how to swim.”

Glover and Dean co-founded Phoenix Flops together through their work on the advisory council, both sharing in a passion for failure.

While his swim team tryout was a lower-stakes failure for Glover, he says his story resonated with other students in the room, particularly Dean. She says failure is an essential part of the college experience in promoting growth.

“Failure is important because it allows us to become the person we need to become, and in order for anything to grow there’s a lot of stripping away that needs to happen in order for the true self to come out,” she said.

Glover and Dean weren’t the only ones in the room who believed in the importance of failure. Jana Lynn Patterson, associate vice president of Student Life and dean of student health and wellness, was also involved in the discussion as a member of senior staff who attends the meetings.

“We’re at a crossroads of people really being able to say, ‘I’m struggling,’ or ‘this didn’t work’ or ‘I’m not doing well,’” Patterson said. “Getting out of the sense that everything lies under a perfect bubble in the Elon world.”

Dean says it was Patterson who jokingly came up with the name that became the movement.

“And the whole room just died in laughter and now we’re like, ‘Ha, joke’s on y’all,’” Dean said.

Patterson became a mentor for the Phoenix Flops movement, and with the support of her office, Phoenix Flops was launched in spring 2017.

What is Phoenix Flops?

Elon students were first introduced to Phoenix Flops on their Instagram feeds. Social media was the first step for Phoenix Flops, and Dean says this was intentional.

“You’re scrolling through your feed and everyone’s pretending to be perfect, and then boom: someone says ‘I flopped,’” Dean said. “The interruption of that within people’s social media feed was really helpful psychologically, and I think that really began to create some buzz.”

These individual stories from the Elon community all led up to Phoenix Flops’ big launch to campus – the documentary with the same name.

Dean recalls being brought to tears on the night of the premiere, which she says was one of the greatest moments of her time at Elon.

The documentary wasn’t the end goal of Phoenix Flops, but just the beginning.

“Our slogan is, ‘Failing forward or failing flat’,” Dean said. “When you failed, did you move forward and learn from it, or did you fall flat? What was the difference? And why did you experience those differences?”

The two co-founders are working to integrate these workshops into leadership training on campus through Residence Life, new student orientation, teacher’s assistant and Leadership Education and Development training workshops.

In addition, Dean has worked to get Elon University recognized as part of Harvard University’s Resilience Consortium, a national group of universities who are all committed to creating innovative campuses through the mission of resilience, failure and risk on college campuses.

“Being honest as a student leader can be really hard, because you wanna make people the best they can be,” she said. “Now I feel much more agency to stand alone with someone in their struggles and to walk alongside them in that rather than to pick them up and place them in success.”

One of the organizations in which Dean implements this is InterVarsity, a Christian fellowship group on campus. She leads a small group of fifteen young women in Bible study, who she said have become like family to her.

“I totally go like a mom when I talk about them because they are fantastic women,” she said. “Seeing them from when they first stepped on campus to now has probably been one of the most rewarding experiences at Elon.”

Sophomore Brittany Walsh is a member of Dean’s small group. She says that when she came to campus her freshman year, Dean made the transition to Elon all the easier.

“She really helped us understand that it’s okay to take a break once in awhile,” Walsh said. "We don’t have to commit, but it’s okay if we want to. And that if we do have problems and have times when we feel like we can’t keep up or we’re overwhelmed, it’s okay.”

Dean said learning to embrace failure through her work with Phoenix Flops has helped her to be more honest in leading her small group, and has equipped her to help others through their own tribulations.

“I felt like I had to hold it together all the time,” Dean said. “I was so wrong. That was the exact opposite of what they needed. They just needed me to be real, and just say, ‘Life is hard sometimes,’ and as soon as I did that I realized they started doing that.”

Walsh said this honesty has helped facilitate a safe space for her and her small group.

“Whenever we get together, I feel like I have a real group of friends, and a really authentic group of people who are willing to be real with me,” Walsh said. “To talk about our struggles and about things that are important to us.”

Overall, Dean said that Phoenix Flops aligns closely with her beliefs, and has helped her to grow in her faith.

“We all try to paint ourselves in a beautiful light, we all try to make ourselves look pretty and handsome and all the things in between all the time,” she said. “Phoenix Flops gave me space to say, 'Listen, I am struggling.'”

As Dean prepares to graduate, she and Glover are working to assemble a team to carry on the Phoenix Flops movement.

Dean says she hopes Phoenix Flops is something that sticks around long after they’re gone, and allows students the freedom to not be perfect  – in and out of the classroom.

“Something that would be a dream for me is that professors really adopt it as allowing for innovative failure in the classroom,” she said. “That’s something that’s really tough in the world of academia and really constrains students.”

But she says her first hope is that Phoenix Flops continues to help students maintain their well-being in college.

“For right now and forever, I hope it’s used mainly as a way for students to take care of themselves.”