Tuning in to the sounds of Elon: behind the scenes of WSOE 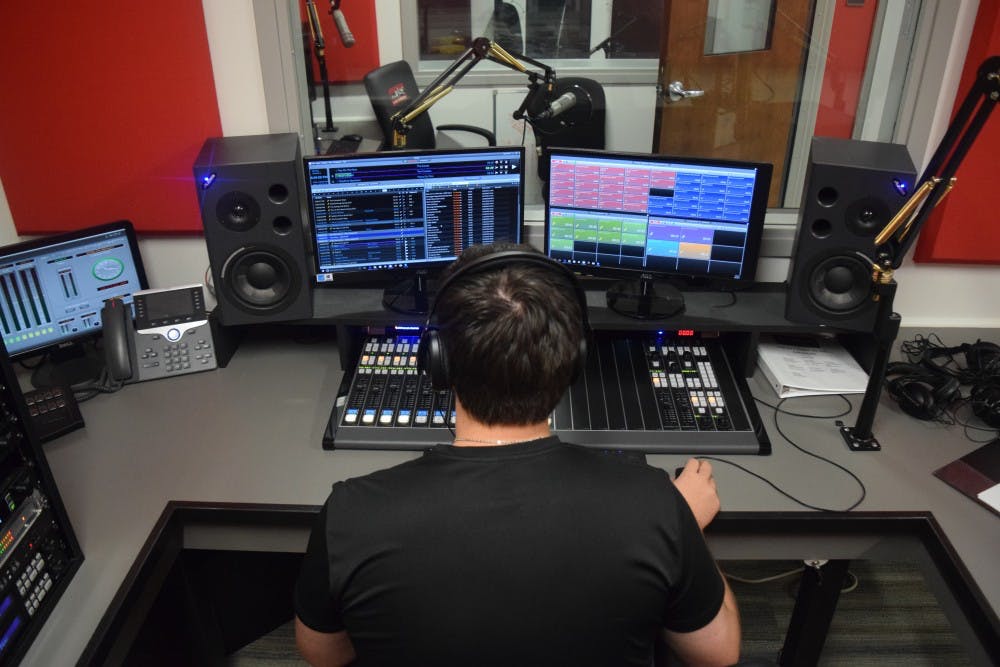 Forty years ago, the Wonderful Sounds of Elon radio station, WSOE, broadcasted its first record ever through its 89.3 FM frequency. The record was “More Than a Feeling” by Boston. Today, the record is set to be framed and placed in the WSOE office built last year in McEwen School of Communications.

WSOE first received its charter from the Federal Communications Commission in 1977. The original newsroom, office and production room were across what used to be Harden Dining Hall located where the Global Neighborhood, now stands, and moved to the Moseley Center in 1994. With the 2017 addition to the School of Communications, WSOE is now located in McEwen 002.

“This new place is weirdly shiny and clean,” Wolter said. “We need to make it more like us. We want to make the studio more of our home.”

“The only alternative” has been the station’s slogan throughout the past decades. For Wolter, this means having an alternative group of people coming together for a common purpose.

“‘The only alternative’ means we’re alternative in the sense that we have a lot of different things going on in our station,” Wolter said. “But it is still cohesive because we’re all WSOE. That’s one common thread we all share.”

What started with one record, led WSOE becoming one of the biggest student media organizations on Elon’s campus. It consists of 90 DJs, 67 shows and six executive staff members. Some have their own committees ranging from seven to 10 people.

Since being elected general manager last November, Wolter has made it her responsibility to improve WSOE and develop the community attached to it.

“I wanted WSOE to be more of a social environment,” Wolter said. “Not just something you come in once a week and not know anybody. I wanted more of a community atmosphere and have more positons available for people to get involved.”

Wolter has seen the growth of the organization being a WSOE member since her freshman year and an executive staffer since her sophomore year. She began her freshman year with her show “Vigorous Vibes” and recalls her first show as one of her most rewarding experiences while working in the station.

“Music has always been an important part of my life,” Wolter said. “For me, having a radio show is a way of constantly keeping up with music and forcing myself to make a good playlist each week and talk about it and continue learning.”

Though she has been a member for the past four years, Wolter believes a majority of Elon’s campus is not aware of what WSOE does. Anyone with a Phoenix Card, either student or staff, can join the team and have their own radio show.

“We want people to understand you don’t have to know anything about radio,” Wolter said. “As long as you’re interested in music or radio in some way, shape or form and want to get involved, we have a place for you.”

Junior Jake Keisler, the promotions director of WSOE, also joined his freshman year as a DJ through his “Strictly Cat Music” show. He said the organization is drifting away from being a once a week activity for regular staff and becoming more of a small family.

Keisler is in charge of “Live Sundays” where local bands play and showcase their talent in the performance room. Besides having a show once a week, members can now participate in committees they are interesed in.

“You can do so much,” Keisler said. “There is not one authority that says what WSOE should be. Everyone is in charge.”

Keisler said including members from across different majors and neighborhoods is what makes the organization special.

“I am looking for the type of person willing to say, ‘I love WSOE and there is a ton of stuff we can do with WSOE, so why not do it,’” Keisler said.

For junior and personnel director Connor Dwyer, the diversity in different shows is something that first excited him about the organization. The shows vary from one-hour shows of just music, sports, news, talk shows and celebrity gossip to more.

“The people who get really excited and really into their shows make me happy to put them on the air and happy to have them broadcasted because I know they are going to be putting out good content,” Dwyer said.

Because of the new equipment, space and staff, Dwyer said he believes expanding beyond individual shows was necessary. Additions of committees allowed members that were not interested in being on-air to also find their place in the organization.

With the enhancements Wolter and her executive staff have done, the recent recreated website now serves as a base for future members.

“My goal this semester is to really help the future generations of WSOE and lay a path for them to succeed,” Wolter said.

Wolter hopes to continue raising awareness for the organization by working with more student organizations like they have done in the past, hosting events on campus and increasing the publicity so more people are interested in giveaways such as music festival passes. This semester they are partnering with Turner Theatre to show School of Rock.

Keisler hopes more people will join the organization and bring their unique shows, perspectives and ideas.

Despite the limitations of radio, such as the lack of visualization, Keisler says being part of WSOE can help people explore their interests and find their place on campus.

“Through sound you can actually do a lot, and I applaud the people who are creative in expressing their passions,” Keisler said.