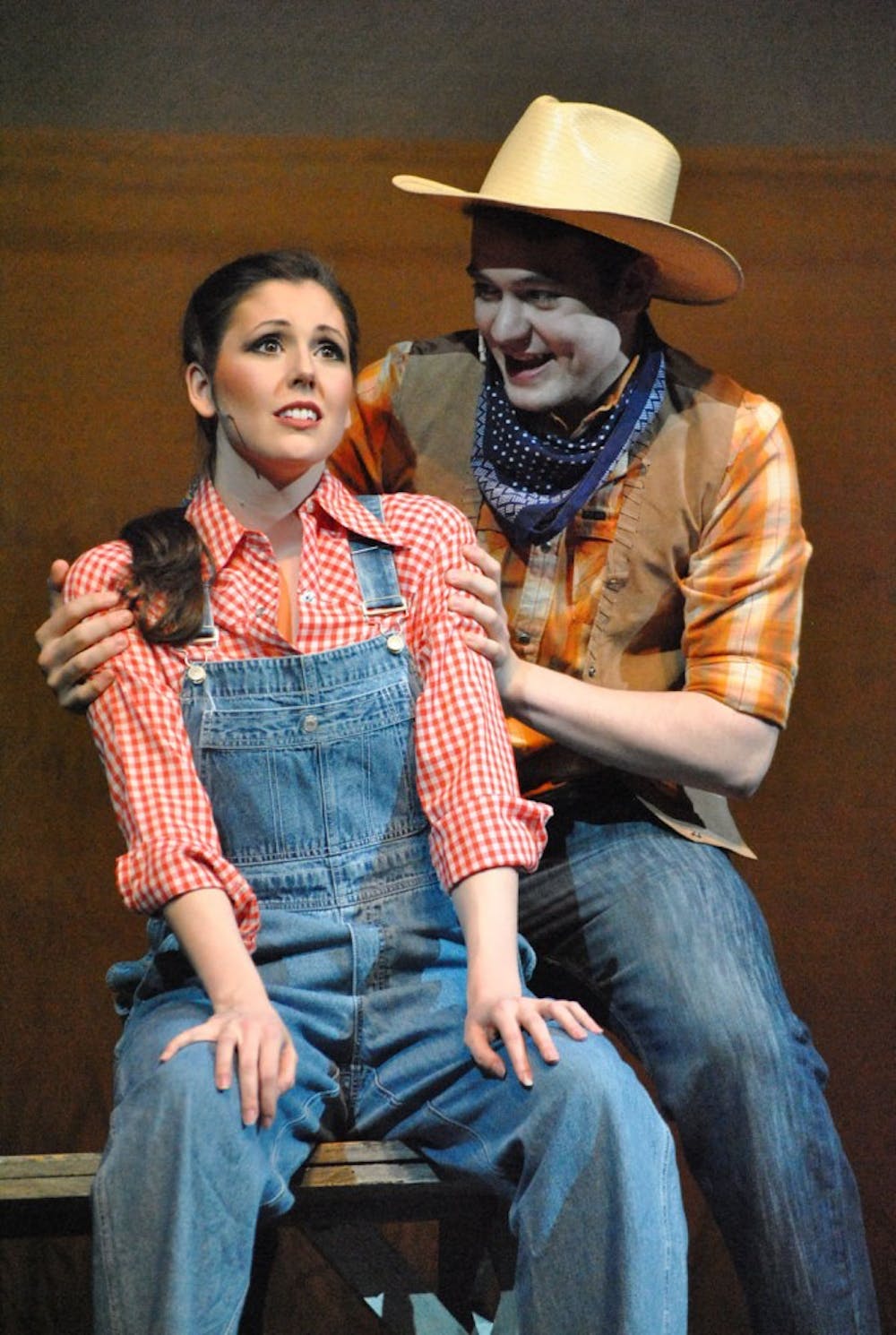 Muhlenkamp performed in her first show at The Paramount Theater in "Fiddler on the Roof." Photo submitted by Katie Muhlenkamp.

Elon University has an intensive and selective musical theater program. This year, 20 students were selected from an applicant pool of 802.

But outside of Scott Studios and the Center for the Arts, it doesn’t take long to hunt down the plainclothes theater junkies. There’s the guy in Oak House with a cast party picture from his high school production of “Chicago” as his desktop, and the girl in the religious studies seminar who absentmindedly hummed the opening number of, “The Book of Mormon.”

December of her freshmen year, junior psychology major Alyssa White decided she had gone long enough without performing on stage. White took to community theater as a means of pursuing musical theater while studying at Elon University, without being a musical theater major.

Since she was four, White had been an active participant in Durant Road Musical Theater in Raleigh, as well as high school shows, private voice lessons and choir. White discovered The Paramount Theater — which sits in downtown Burlington by The Blend & Co. and The Company Shops — through a Google search.

“I was really missing that part of my life so I looked for auditions online,” White said. “I saw they were having ‘Hairspray’ auditions and I decided to do that, which was so out of my comfort zone.”

"It's a wide-open community and that's one thing that I'm very proud of particularly in relation to Elon students. Sometimes theaters can be a little cliquish — not so here, in the Alamance County community.”

White remembers sitting at her first audition so full of nerves that she almost got up and left. Now, she’s a valued member of The Gallery Players, one of several theater companies that use the Paramount Theater space. Since her first audition, White has performed in “Hairspray,” “Bye Bye Birdie,” “Ragtime,” and most recently, “Sister Act.”

“She is one of those very versatile ensemble performers,” Wright said. “I know that she's going to be moving into principle lead roles here in the next couple years. I always love to see her show up that first night of auditions."

White enjoys working with adults because she can lean on the more seasoned veterans. One of her role models this season appeared alongside her in “Sister Act,” which closed last weekend.

“She could be on Broadway, but she’s a first grade teacher,” White said. “Even adults can have this hobby that they can fall back on after their everyday jobs. I think my favorite part of being onstage is watching her do her thing.”

If anyone’s a role model for “doing her thing” through community theater, it’s Elon alumna Katie Muhlenkamp '10. Muhlenkamp didn’t perform in the community until post-graduation, but her journey along the way is a testament to the power of cultivating your passions with your own timeline and framework.

Muhlenkamp began school as a vocal performance major but later switched to pre-law. Still, Elon allowed her to stay on the recital track and perform with the ensembles through her senior year. Like White, musical theater at Elon was never an option.

“During the time I was there, there was one vocal performance major who performed a cameo solo in a large musical, and that was the only overlap there ever was,” Muhlenkamp said.

"Our relationship with Elon performing arts is somewhat limited because of the incredible amount of dedication and time that it takes in the academic curriculum and the production schedule they have,” Wright said. “They're getting that training and they have to be working with their professors. Still, we've had amazingly talented people who have participated here, like Alyssa and Katie."

Today, Muhlenkamp continues her theater work to great success. Her trajectory was not a straight line, but rather a collection of just the right twists and turns of fate, married with equal measures of grit and adaptability.

After completing law school, Muhlenkamp was studying to take the bar exam. Between taking the exam and receiving results, Muhlenkamp couldn’t practice law and would soon find herself facing about a month and a half of time in limbo. She and her husband were out walking when they were stopped by an advertisement that screamed opportunity.

“We saw auditions posted for 'Fiddler on the Roof' with Gallery Player at The Paramount Theater,” Muhlenkamp said. “My husband was like, ‘This would be a really good thing for you to do to not be freaking out about waiting to find out how you did.”

Muhlenkamp auditioned just two weeks before the exam. She even had her study materials with her as she was waiting to go into the audition.

Muhlenkamp continued to balance the passions she cultivated at Elon — voice and law — during this month and a half, just as she does today.

“The first day of rehearsal was the night of the bar exam,” Muhlenkamp said. “I drove from Raleigh straight to my first choreography rehearsal.”

She channeled her energy into “Fiddler on the Roof” as she waited for her results. When she passed, she celebrated with the cast.

Fast forward two-and-a-half years of marathon shows, teaching voice lessons and practicing law before a stint last year living in France, and Muhlenkamp’s path stands as a reminder to nurture all parts of yourself in which you find success and happiness. And to peruse them without hesitancy.

“I did law school — and I still got to do “Mary Poppins” to a thousand-person house with a 12-piece orchestra. That's real stuff. That isn't, ‘I found a little show box that let me sing.’”

This week, she’s driving up from her new home in Charlottesville, Virginia — where she’ll be performing in community theater and teaching voice lessons with a fellow cast member — to sing in one of Wright’s shows for the week.

“You can be great at many things,” Muhlenkamp said. “Sometimes we think we're on one linear path, and we find ourselves on another linear path. What we love tends to pull us in certain directions. Follow all of those little rabbit holes, do the things you love and be as good at them as you can, because there’s always opportunities."