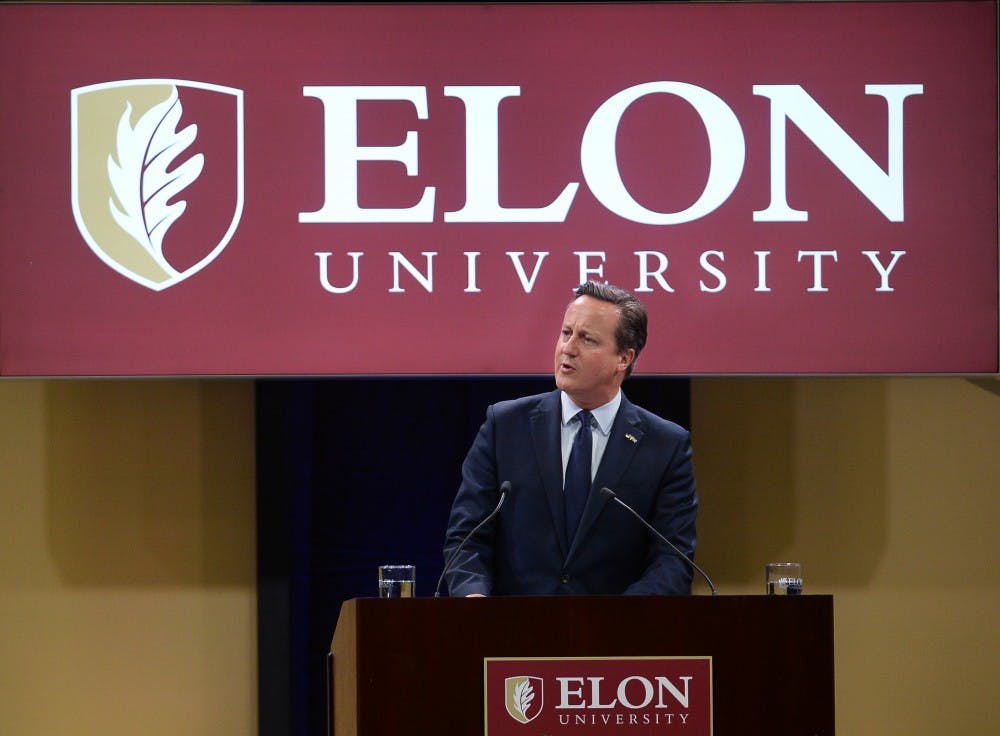 Former Prime Minister David Cameron speaks to the Elon community during its Fall Convocation in the Alumni Gym on Thursday, Oct 5. [Caroline Brehman]

In 2010, David Cameron at age 43, was elected as the youngest prime minister in nearly two centuries, and served until he stepped down in 2016. Cameron was the second prime minister to speak at Elon’s convocation after Margaret Thatcher spoke in 1995.

Cameron came to Elon during an emotional time while the nation deals with the aftermath of a mass shooting in Las Vegas that claimed the lives of 59 people. Though the current mood of the country as a whole is gloomy, Cameron stayed positive about the future of this country, while promoting its bond with the United Kingdom.

“I am an optimist, a glass half full guy,” Cameron said. “I always thought that our best days lie ahead. Yes, we face immense challenges in our world, but sometimes, it is good to stand back and take a look across the decades and see what has actually been achieved in recent years.”

During Cameron’s six-year term, he passed legislation that supported gay rights, created and enforced a minimum wage and worked to protect the National Health Service. Cameron believes in cooperation between citizens around the world, and that we should acknowledge the things people have accomplished.

“Freedom, democracy, free enterprise, tolerance … recognizing our dependence on one another, both at home and across the globe. Sure, some of these things need reforming and rebooting, but we must not throw the baby of our success out with the bathwater of our current concerns.”

Cameron mentioned the Charlottesville, Virginia,  riots that divided the country and sparked a discussion on our freedoms as a nation. In August, neo-Nazis and white supremacists clashed with counter protesters, claiming the lives of three people. Cameron said this is the antithesis of United States ideals and values.

“Your country is the embodiment of diversity,” Cameron said. “You have a creed that says, ‘All men are created equal.’ That is why it is so sickening when you see people on the streets of Charlottesville burning torches, carrying Swastika banners and chanting, 'Jews will not replace us.’ It’s not just because these are disgusting sentiments, but because this is America, the country that defeated the Nazis.”

Elon students are allowed to be apart of the US-UK Fulbright program, which grants students a one bedroom flat in the United Kingdom, with the chance to learn from instructors. Now, Cameron is focusing his attention on the youth as the Chairman of Patrons at the United Kingdom’s flagship youth development program, The National Citizen Service. This service helps bring teenagers of different ages together and place them to build projects that help the community. Cameron’s words and intentions have touched the lives of many young adults, including freshman Brooke Galonek.

“I liked how he said not to give up on America, because I think a lot of people are giving up on America right now,” Galonek said. “I like that someone outside the viewpoint of the United States thinks we should have a little hope as a country. It definitely makes me feel more optimistic.”