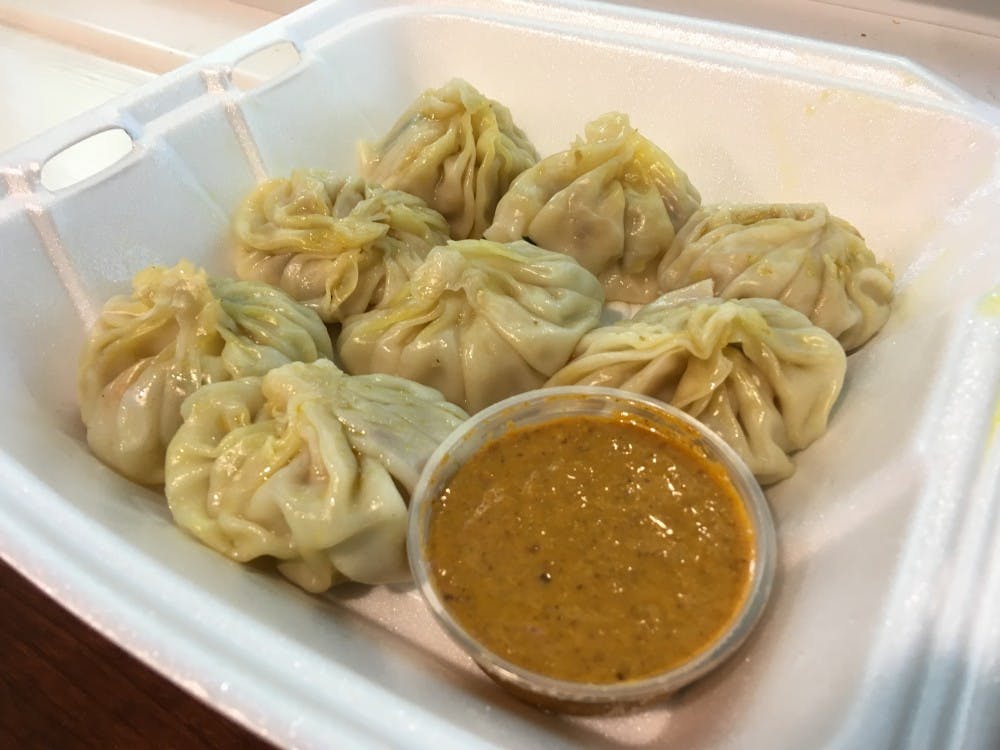 
Chicken dumplings are one of the various food options at Bowl and Naan. At just $6.95 for 10 dumplings, they're a great deal.

A couple of blocks down South Church street, nestled in the corner mall near NY Bagel, lies one of the few Indian restaurants in Burlington — Bowl and Naan.

The restaurant opened seven months ago, and has been serving up tasty Indian food in a Chipotle-style setting, where customers get to choose whether they want a rice bowl, naan wrap or salad bowl and then pick their protein, veggie toppings and sauce.

Its four owners all came to Burlington from around the United States to open the shop.

Pushpa Thapa, one of the co-owners said that when deciding where to open the restaurant, they were initially considering opening in Morrisville, North Carolina, near the Raleigh-Durham International Airport.  But after assessing their finances and looking at other locations, Burlington turned out to be the right fit.

“We found out that Burlington is one of the central locations between RDU, High Point and Greensboro . . . We thought, ‘Okay, this is going to be a good place to open a restaurant.’ Also the competition isn’t that high here,” Thapa said.

While they’re one of the few Indian restaurants around, they’ve set themselves apart even further with their build-your-own style of dining.

“I think that there aren’t a lot of Nepalese or Indian restaurants that can do something like Chipotle. Nowadays, people want to do something fast and takeout,” Thapa said.

The restaurant also takes care to cater to those who are health-conscious, with plenty of vegetarian meals.

“We want to emphasize healthy options. Like a lot of fresh veggies and that’s where all the community people are converging into,” Thapa said.

One of the options is a naan wrap with chicken, loaded with vegetables — customers can choose from more than 15 — and topped with warm masala sauce. Combined with a side of 10 chicken dumplings for good measure. The total came out to around $13.50, which is a great deal considering it was easily two meals worth of food.

After ordering, customers can sit down at a table or booth and enjoy the soft Indian music playing, while looking at the east-meets-west décor. Since the space used to be a pizza parlor, the layout is traditionally Italian, but the walls have been painted and art has been put up to give it a welcoming feel.

And the warm decor only heightens the delicious food. The chicken was tender, the sauce creamy, the veggies fresh and flavorful and it all came wrapped up in a warm, fluffy piece of naan bread.

Other customers also enjoyed their meals. First time visitor Rachel Call thought the food was delicious, and different than what she’s had at other restaurants.

According to Thapa, that’s part of what sets Bowl and Naan apart.

“Our quality. Our food ethnicity is unique as well,” Thapa said. “Even though this is a fast food restaurant, customers who are used to ethnic food won’t be disappointed because of the recipe that we used. It’s very ethnic. We haven’t compromised any of the spices.”

Bowl and Naan is also working hard to cater to students. They offer delivery services to Elon, Burlington and Gibsonville and have plenty of coupons and lunch specials. Show your student ID and you can get 10 percent off your order.

Other items you can order include classics like chicken tikka masala and lamb curry, or you can try out a tandoori pizza with chicken, lamb, paneer and veggie toppings. Whatever you get, it’s sure to be delicious and a good deal.

When it comes to the overall experience, Call summed it up the best.

“It’s very different, but in a good way."