Don't kneel out of the conversation

Discussing NFL protests is hard, but we need to do it 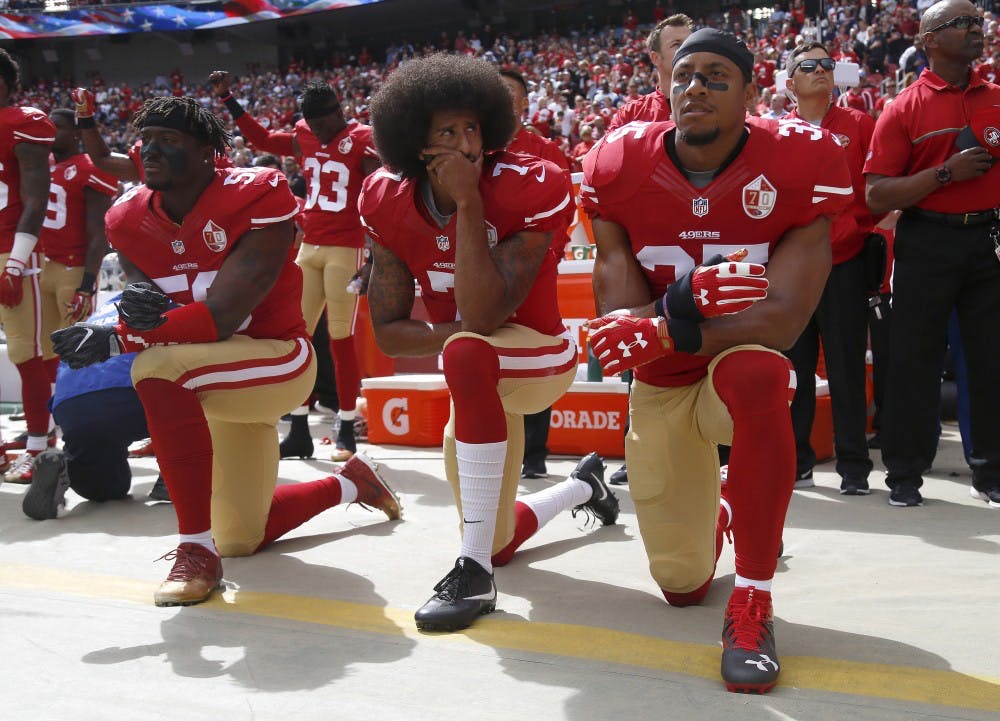 If I could equate the state of our country’s politics right now, it’d be to an episode of my mom and I debating about my chores when I was in grade school.

It’s an unusual comparison, but bear with me.

When I was younger, I despised doing the dishes. They smelled and required a lot of work to clean. Usually, I tried to finesse my way around it. And over the years, my mom and I had plenty of exchanges like this:

No matter the excuse, she and I both knew I couldn’t escape responsibilities. The dishes sat in the sink waiting. Sooner or later, I’d have to face what I didn't want to do.

On Saturday, I had a similar experience, but I didn’t realize it until now. After Elon University’s 6-0 win against the University at Albany, I finally met first-year head coach Curt Cignetti in person. And the first question I asked definitely broke the ice.

Amid a slew of NFL protests after President Donald Trump said players who kneel for the national anthem are a “son of bitch” two weeks ago, I wanted to know how Elon’s football team felt.

College is different than the NFL. Most teams — Elon being one of them — aren’t on the field for the national anthem. Still, I wanted to know if Cignetti and his team discussed the issue of protesting and what he personally believed on the topic. His answer surprised me.

But it also didn’t.

When I asked, “I know the team isn’t on the  field, but have you and your team had a conversation about the anthem?” he looked at me funny.

“What’s been going on? When I’m in season, I don’t really watch television or read the paper,” he said.

My friends and family know when I get nervous, I stutter. From that point, the words floundered out of my mouth.

“You want a comment from me about this don’t you,” he said.

“I love our flag and I respect the national anthem,” he said. “That’s my comment. I had to play hard to get with you at first.”

Afterward, we shook hands again and laughed before I left the press conference room. And the more I thought about it later, I realized why he gave me that answer.

In his mind, it probably wasn’t worth it. He’s coached the Phoenix to a 4-1 record, its best start to a season in eight years. The program’s momentum is the highest it’s ever been recently. Why would he risk all that and change the narrative by divulging his team’s private, and possibly controversial, conversations?

Other coaches have done the same. North Carolina State University coach Dave Doeren bluntly told reporters, “I’m not in the NFL, so I don’t have to deal with that,” regarding protests. Coaches have every right to talk as much or as little as they want about this issue. I respect that. But it’s the easy way out.

And as a nation, we need to stop choosing that route.

Usually, my mom had the perfect answer for my excuses.

“You didn't hear me because you didn't want to hear me,” she said.

Until I headed her message, I didn't get anywhere and the work I had to do wouldn't get accomplished.

Right now, the United States is in the same situation.

It amazes me how steeply Colin Kaepernick’s message has been construed. On a constant basis, the quarterback and players who followed his protest said their message was not in disrespect toward the flag or military. Yet people constantly refuse to change course.

One month after Kaepernick prophetically said, “There are bodies lying in the street and people getting paid leave and getting away with murder,” in August 2016, that scenario took place in my hometown. The officer involved shooting of Keith Lamont Scott and the subsequent riots in Charlotte rocked me to my core. You can't really put into words what it’s like to see the city you grew up in tear itself apart on national television. I thought people would realize Kaepernick’s message after that tragedy.

It’s been a year since, and I was wrong.

I’m now convinced people will subjectively twist Kaepernick's message to how they see fit. They don’t want to hear what he said. Instead, they’re taking the easy route out.

As a nation, we have a lot of social and political chores to take care of. It’s what Kaepernick originally protested, but people choose to be mad at other things because its easy and convenient for them.

At this point in our history, we can’t have selective hearing.

If we manipulate this issue into a competition of who is more patriotic and sidestep the true issues altogether, then we are acting like I did when I was as a child.

We’re not doing our chores.

The ebb and flow of news cycles inevitably changes, and considering the events of Las Vegas, this kneeling story will soon subside. But the issues Kaepernick protested aren't going anywhere. We can't avoid it.