Caught between cultures: One professor’s journey from China to Elon 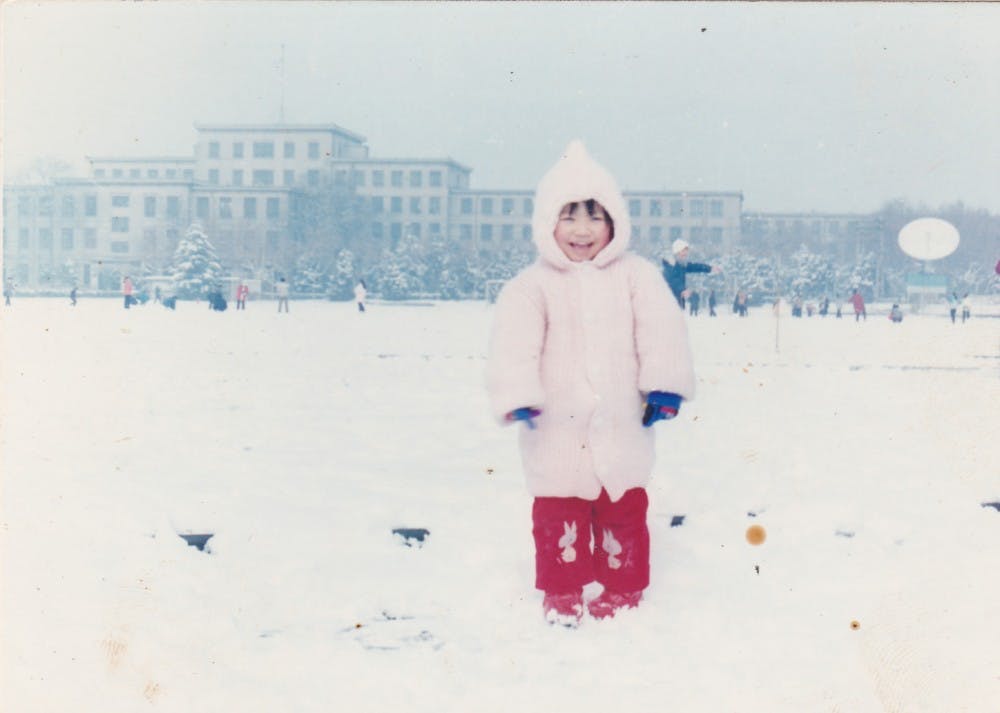 Duan grew up in China until 2008 when she moved to Seattle to pursue a Ph.D. Photo courtesy of Xiaolin Duan.

Xiaolin Duan thinks it’s strange that so many Americans see China as a restrictive Communist state. She would say that it’s quite the opposite — and she would know. Duan spent her entire childhood there before moving to the United States for graduate school.

Duan has worked as a history professor at Elon University since 2015, but the journey she took to get to the brick-lined campus has been far from typical. Duan grew up in Xi’an, a city of eight million people in northwestern China. Studying Chinese history and culture as an undergrad in Beijing, she elected to go overseas to the University of Washington in Seattle to pursue her Ph.D in 2008.

She came to the United States because Western teaching of Chinese history has a more social and cultural focus than its Chinese counterpart. As she’s spent time studying and teaching Chinese culture, she’s also learned a bit about American culture along the way.

“It’s a society that really values individualism and independence,” Duan said. “It’s a society where if you have some request, you should speak up. In China, traditional values say you should hold it back. There are less social rules in the U.S.”

Now, Duan’s settled down a long way from Seattle, and a world away from Xi’an. Her first stop after leaving Seattle was Luther College, a small school of about 2,000 students tucked away in the cornfields of northeast Iowa. After just a year there, she rerouted to Elon.

“For the first couple months I was really concerned and bothered that there is no food — especially street food — after 9 p.m,” Duan said. “If I’m craving some food after nine, instant noodles seemed to be the easiest choice, and that bothered me.”

Now, she thinks about the things that have changed for Chinese people in the United States during the time that she’s been here. In 2008, Duan said, she and her friends barely talked about the election. Maybe they watched one of the debates, but they didn’t find much interest in U.S. politics. This year, though, things have been much different.

Every night when she gets home, Duan sees her phone light up with hundreds of messages in group message chats with her friends, some Chinese expats in the United States, some still living in China. They like to talk about how the Chinese-American community handled the most recent election. It’s a topic, she says, that has split that community.

“Now we can see that we will stay in this society for a considerably long time, so we care more about what this society will turn into.”

Duan has some other thoughts on American society, too. She thinks that it’s a little odd that so many Americans have this idea that China is a restrictive communist state. She teaches a class called, “Western Imaginations of China,” and at the beginning of every semester asks her students about their pre-existing ideas of what life in China is like. And every year, students paint a picture of the “Red China” of years past. Years that ended before Duan was even born.

She says that this perception is about 85 percent stereotype.

“I never felt any restraints on what I could read or what I couldn’t read,” she said. “I remember my parents reading or watching the movies or books that were supposedly banned, but apparently we had ways to find that online.”

She doesn’t really know where Americans get the idea that China is still like the communist state it once was, but she actually thinks it’s kind of funny. While Americans like to talk about the fact that the Chinese government censors websites such as Facebook and Google, Duan and her friends use the sites freely, and often joke the Chinese government will, “invite them for a cup of tea” if they post about any “sensitive topics.”

Her unique cultural situation, not only as a member of both cultures, but also as a teacher, has helped her bust stereotypes and misconceptions on both sides. Just ask David Fletcher, a colleague of hers in Elon’s
history department.

“Having been here in the United States and having studied in the U.S., she brings the best of both worlds,” Fletcher said. “She has a foot in China, and has her heart there, but at the same time she also has a perspective from the West and can speak to western students and Asian students to bridge misunderstandings for the both of them.”

A past in two worlds, a future in one

While she’s had plenty of time to think about how her life has changed since moving to the United States, her roots are in China, and sometimes she can’t help but think about going back. Her husband Wei, another Chinese native living in the United States, is a professor at Oakland University in Michigan. While their short-term plans keep them them apart, they often talk about the potential of closing the physical distance between them.

The two don’t have any children yet, but they go back and forth on where they’d rather raise a child. She’s found pros and cons for both countries. Duan says her high school years were some of the unhappiest of her life, and she’s not sure she’d want to put her own child through the Chinese education system. She also considers the idea that her children could have some identity issues growing up Chinese in the United States.

Though Duan thinks about her decision with a future family in mind, she’s also torn on which country would best suit her own life. Before coming to the United States for school, she had always planned on moving back to China after graduating. But now, with almost seven years of her adult life spent in the states, she wonders if that would make the most sense.

“I started my independent life here in the U.S. I’m more familiar with this social system, rather than how to survive in a big city in China,” Duan said. “I know it sounds funny, but I’d feel even more nervous about going back than finding another job here.”

For now, she believes that wherever she ends up, she will always enjoy the opportunity to have lived in two different societies.

“It’s a great experience to live in two cultures and be able to compare the two cultures on a level I didn’t expect,” Duan said. “There are certain challenges to living in a foreign country, and I think those challenges make me a better person.”