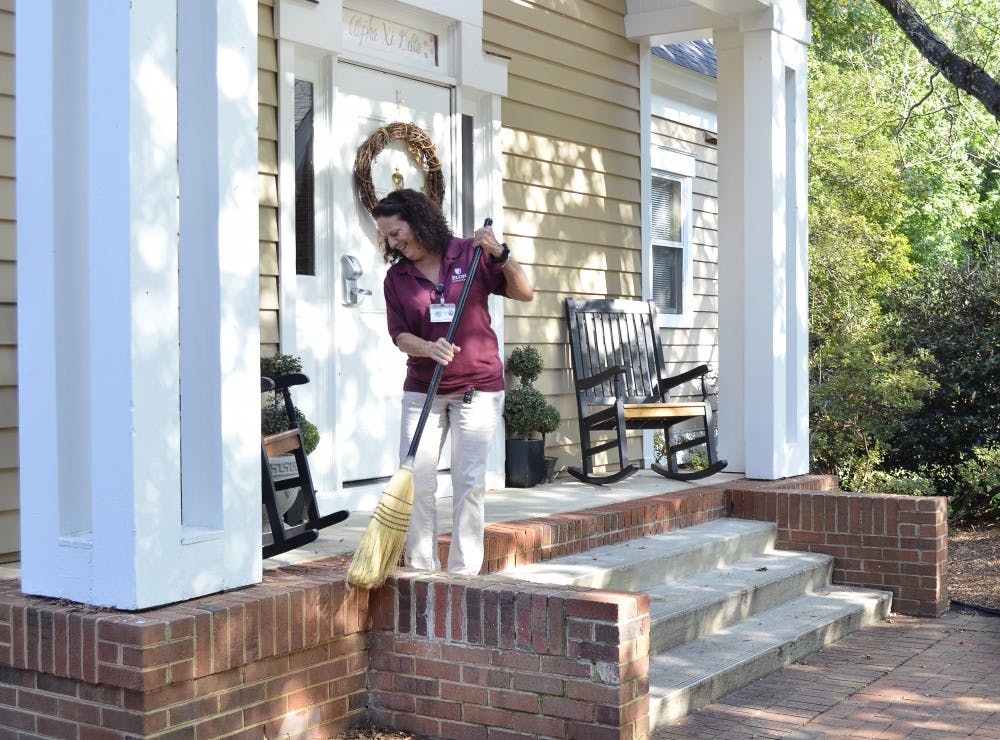 Bearing a staunch smile, a southern twang and a Rubbermaid broom, Physical Plant employee Sarah Stevens is a staple to the Elon University community.

Stevens serves on the cleaning staff for the Loy center neighborhood where she has many admirers due to her reliable positivity. Stevens has been at Elon for more than six years and has seen a handful of change come upon day-to-day life at the university.

“I’ve seen more buildings built and torn down at this college in six years than I had in any measure of time in my life before that,” she said.

Stevens says that so much has changed that she can barely remember what the campus looked like when she started. Her first job at Elon was as a cashier in something called the “C-Store” which she says was a comfort food dining location in the first floor of McEwen Dining hall.

“My spot was the hottest place to eat on campus,” she said. “In the morning we sold tots and in the afternoon we had chicken tenders. The line went so far out the door we never knew when it would end.”

Before landing the job at Elon, she had been out of work for some time, having been a victim of personnel cuts at the kitchen and bath design company she had been working at for nearly 15 years in Guilford County. Her situation quickly worsened in ways she never imagined when her son got in a motorcycle wreck, went into a coma and was suffering from both a brain injury and collapsed lungs.

This turned Stevens’ world upside down. For two weeks, she frantically searched for employment so she could pay his medical bills. Her friend worked with Aramark at Elon and suggested she give it a try, too.

“Her friend had said that it was ‘easy money and lots of fun’ to work with young, college-age people,” says Stevens, adding that she really didn’t have time to be picky.

Having no other option, Stevens applied and got the job.

From day one, her employment at Elon was a saving grace. She quickly had the money to pay her son’s medical bills, and miraculously, he recovered from his condition within the next month and was back on his feet soon after.

In a way, her first cashier job at Elon had saved her family, which might have been the reason Stevens initially loved her job, but now, things have changed. She says the reason she adores working at Elon is because of the students she gets to work for.

Stevens said when her son was in the hospital, and she began working at Elon, the stories from the students she met made her happy in the light of her son’s tragedy. She sees the future of Elon students who have graduated from Elon, and she lives vicariously through this pride, like the parent of a college student she always wanted to be.

“I meet up with people I knew when they were freshmen, and I see them graduating,” Stevens said. “These kids that I love to death, and it really warms my heart. I keep their stories and I remember them when they’re gone. And I’ll remember them if they ever come back, too.”

Stevens thinks she’s the kind of person students are going to brush over when they remember their college experiences. But this is where she’s wrong.

“Miss Sarah is definitely one of the biggest perks of living in the on-campus house,” said junior Hanna Harper, a close friend of Stevens from living in the Loy Center last year. “She keeps us all in check and her generosity is constantly overflowing.”

Not only is the Elon community a home to Stevens, but Alamance County was also where she was born, raised and educated. Stevens had a rocky upbringing; she had lost her father at a young age and has always felt like the odd one out among her four sisters.

She was eventually relocated to Guilford County by Social Services, who decided to remove her from the family, as she was a victim of an abusive home situation.

“My sisters,” she said, “all four of them, they tried to fight the system and get me back in the house, but it was too tough,” she said. “I had permanently been moved to another family.”

She questions whether she would’ve turned out the same kind of person if she hadn’t been removed from her original family. But those who know her admire the person she is today, regardless of what she has been through. Stevens is a breast cancer survivor who recently had a relapse scare, but her upbeat personality would never give that away.

“People are always saying Sarah is so generous and kind, but that’s where I disagree,” said Marcella Mastrocola, another student who lived in a house serviced by Stevens. “Sure, she’s kind and friendly, but that’s not the first thing that comes to mind. I like Miss Sarah because she’s kind of a mother figure for everyone that lives in the houses she services. She will absolutely tell things how it is and has a sense for knowing when something is wrong. She’s a genuine person and wants to know what’s going on in our lives.”

Stevens said that whenever students have positive things to say about her, they’re just building her up. But again, this is a spot where she happens to be wrong.

“She’s always talking about how she remembers our stories when we’re gone,” Harper said. “But I think I’ll remember hers much longer. She’s just the kind of person who sticks. You know?”