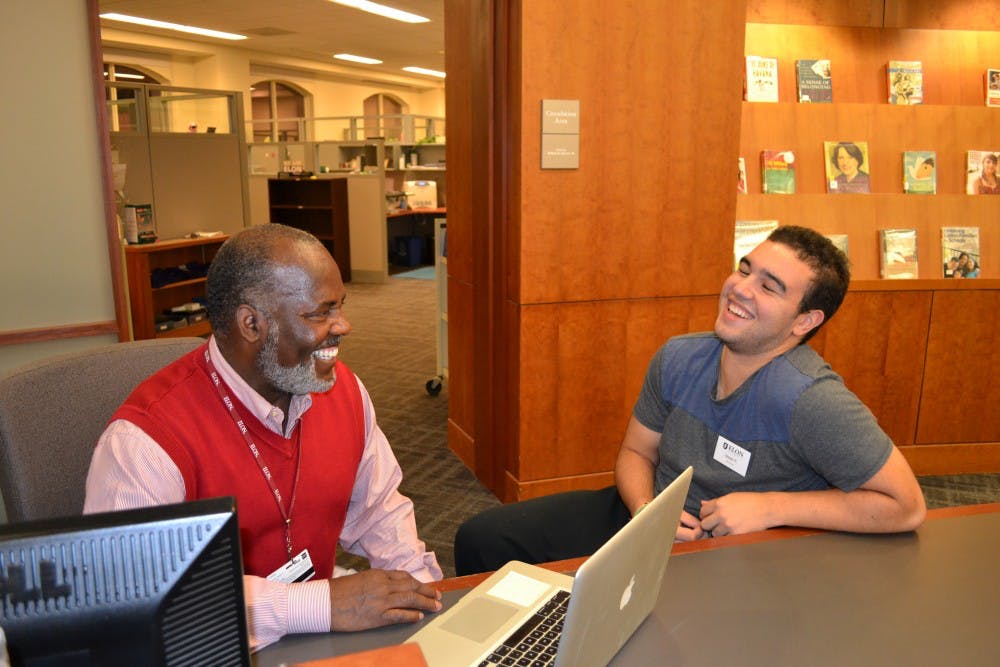 A steady flow of student traffic exits the library as the sky above Young Commons darkens. While the sunset outside signals the end of a study session, Dwight Davis’ shift has just begun.

Davis, late-night library specialist and computer support, is celebrating his fifteenth year serving the Elon University community between the hours of 11:30 p.m. - 7:30 a.m. in the Carol Grotnes Belk Library.

“I’m the only one there at night,” Davis said. “If they want books checked out, if they need to find different materials — I can help them do that. I do a little bit of everything.”

Davis monitors every floor and the front desk, but he is better known for his late-night conversations, and saving students in danger of oversleeping after all-nighters.

“A student will ask him to wake them up — ‘I just want to take a nap, will you make sure I get up? I have an eight o’ clock class.’” said Doris Davis, Dwight Davis’ wife and interlibrary loan and reserves assistant. “He makes the library a place where students enjoy coming.”

Jasper Pike, senior and library team leader, has an easy response for people who question why he prefers the 10 p.m. to 1 a.m. night shift. For three years now, he has spent these shifts with Dwight.

"I still look forward to hearing his rolling bag come in just before midnight. Whether he’s bragging about the latest travel deal he’s found while scouring the internet or a detailed examination of whatever game I’d been keeping track of that night, he’s one of my favorite people to talk to here."

“Dwight loves to give people advice,” Pike said. “It doesn’t matter if it’s someone like me who he’s known for years or who just started working that night. He’s always willing to hear you out and offer wisdom and advice.”

Dwight credits his experiences as a pastor and father with his success as a mentor.

"I can recognize the different expressions on the students’ faces and stay and talk with them. By having children, you sort of know what they’re going through and what they’re experiencing."

Dwight’s family is still very much part of the Elon community. Their youngest son got married in Whitley Auditorium in July, and their grandchildren love to come play on campus.

“We attend the football games and basketballs games,” Doris said. “On the weekends, we’ll walk through campus or use the recreation center. Our grandson — he’s going to be eight — has been here since he was practically a little baby, coming out to Lake Mary Nell with the ducks.”

Dwight inspires students with the perseverance he embodies in his own life. In June 2014, Davis underwent a total knee replacement and this past December the same knee had to be redone. During his recovery, Dwight was anxious to get back to one of his support systems: the library.

“The library is an excellent place for him because he walks around every night but he doesn’t have to be continually on his feet,” Doris said. “It’s helped him to bounce back. He’s now back into the fitness center doing about 10 miles a day.”

Between Dwight and the brightening atrium, the last of the late-night students awaken, and Dwight heads home to exercise his knee and enjoy the day before calling it a night. On his way out, he’ll pass his wife settling in to her seven o’ clock shift.

In the morning and late at night, it’s here at the library where Dwight can always find family.

"Dwight is not someone a lot of people on campus know," Pike said. "But those who do absolutely love him."