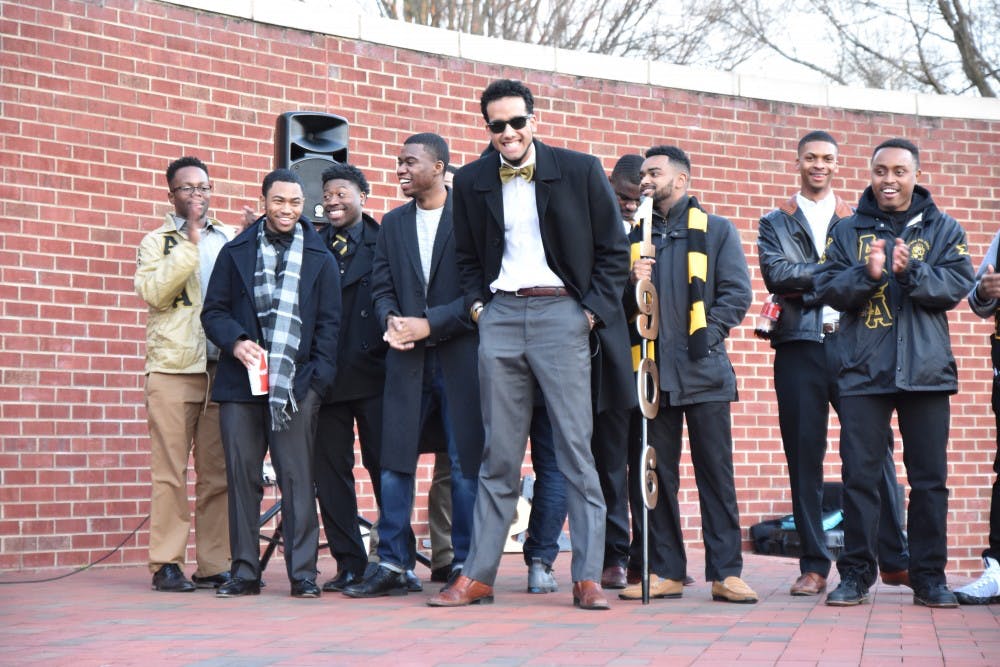 The recent police shootings, current political climate and protests such as the one Charlottesville, Virginia have led senior Alonzo Cee to combat the negative stereotypes aimed at black males.

While interning and doing research at the Alpha Phi Alpha Fraternity, Inc. headquarters this summer, Cee realized of the lack of support systems existing for black males on college campuses.

“The books I was reading and researched talked about that there needs to be support groups specifically targeted for black men in order to make them feel like they have some worth, have that connection and have that bond,” Cee said.

“The thing I reflected on was what support systems we have here at Elon for black men,” Cee said. “What I realized is that if you aren’t in a black fraternity or a sports team where a good amount of members aren’t POCs [people of color] or black, you aren’t going to have a support group.”

This led him to create the Black Men of Distinction group which kicked off with an Instagram page (@blackmenofeu) earlier this month. Cee wants this group to transcend social or extracurricular activities on campus.

“I wanted to be a part of something that had a positive impact amongst a demographic that isn’t really talked about,” Cee said.

The group began as a social media campaign to spotlight and showcase 'black boy joy' and accomplishments that black men achieve on Elon’s campus.

“I want this to be something that really tells a story and captures different moments of different black men on campus,” Cee said. “These posts can continue to live even after they’re posted.”

Cee wants the group to eventually become an organization specifically for black men where they are able to host events, panels and talk about subjects such as black manhood, identity and their roles on campus. He also wants to incorporate a mentor/mentee aspect to it.

To gain support from the entire scope of black men on campus, Cee contacted nine other black men from diverse areas on campus to help start the group. Some of the members represent fine arts, arts and sciences, SGA, the Connections office and athletics, among others.

“If you were really to delve into each identity of the 10 of us, we’re all black men,” Cee said. “But we’re all different, have different areas of expertise and different insights that we bring to the table."

The mission of the Black Men of Distinction group is to change the narrative of the negative stereotypes black males have.

“You don’t really get to change the narrative until you actually have a force trying to do it,” Cee said. “I think with the different spheres of influence that we have, the social media campaign and the support group we’re trying to build up ... I think we have a chance of doing it.”

Kicking off the campaign

“Black boy joy is finding those moments that are joyful to a black man and really trying to show the positives of black manhood,” Cee said.

Freshman Zion McKnight began following the page even before stepping foot on Elon’s campus. For him, black boy joy means “being proud to be the black male that God created you to be.”

McKnight began following the page because when he saw the name of the page, he knew that it applied to him.

“I’m a black man and I’m now officially attending Elon University,” McKnight said. “I felt like the page would post things that I could relate with.”

According to Cee, who currently runs the Instagram account, the photos and statements used on the Instagram page are meant to be positive and uplift others.

The name “Black Men of Distinction” stems from the 10 men starting the campaign as well as the target audience who are distinct because of their skin color.

“We are set apart, but it's stereotypically done in a negative fashion,” Cee said. “However, coupling that with black boy joy and the pure fact of this movement we’re also being distinct in our actions and in our influence that we have on campus.”

Though ideas are still being decided in terms of how they will pick those who will be showcased on the page, Cee thinks that direct message submissions could work as well as the spheres of influence of those leading the movement.

During this fall semester, the Black Men of Distinction will work under the Black Student Union and possibly in the spring become their own organization.

The group not only hopes to spotlight achievements of black men on campus, but also to be a support system for many — especially freshmen — beginning their journey at Elon.

During his first few days at Elon, McKnight felt welcomed by the different groups at Elon. When he visited the open house at the Center for Race, Ethnicity and Diversity Education (CREDE) last Friday, he met some of the creators of the @blackmenofeu page.

“I just felt a vibe with them,” McKnight said. “They were really optimistic and even referenced groups like the SMART program to join if I needed mentors or even just guidance.”

McKnight believes it is a great idea to have programs meant specifically for people of color.

“I feel like they’re essential because, for people of color who haven’t found themselves yet or are looking for somewhere to belong, they’ll have somewhere,” McKnight said.

He’s eager to get involved in these types of groups and, because of his interest in photography, hopes to promote his photography through the @blackmenofeu page.

Besides becoming a support group for students, Cee also hopes to showcase faculty and staff throughout campus that identifies as black males. He wants to begin with the CREDE staff first and then work his way through different departments.

Cee acknowledged that even faculty and staff on campus need that boost they can get from the group as well as be uplifted by the members. Though the Black Men of Distinction was his original idea, Cee hopes it becomes a movement that lives longer than his own existence.

“I want this to be something that is positive for all black men here on this campus and something that they can all take pride in,” Cee said. “So that the next person that is in charge of this program can actually hold this up high and be proud of it.”