Grading the greek effect: The effects of Greek affiliation on academic performance

A study at Duke University showed that joining a Greek organization resulted in a drop in students’ GPA, but the data at Elon University shows a more complicated picture. 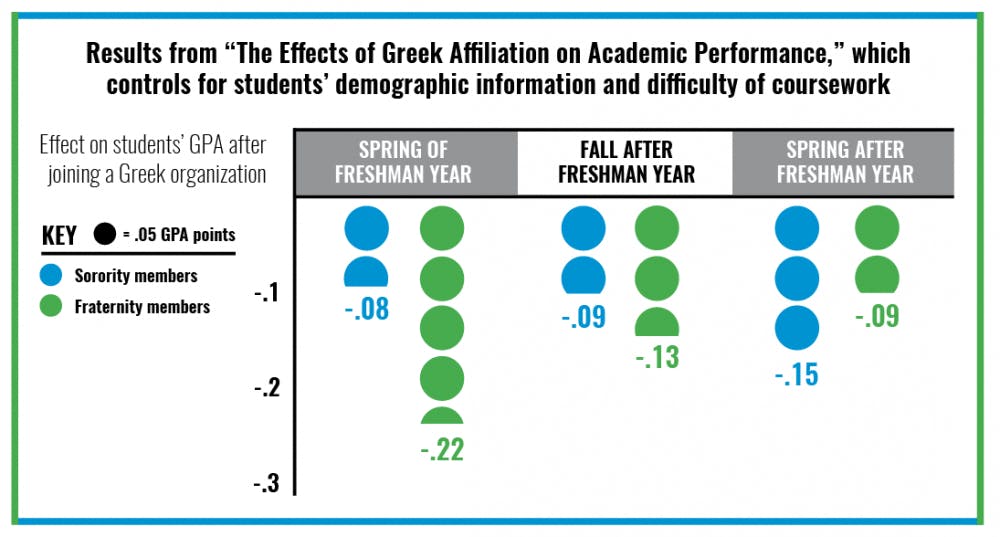 A Duke University study shows a decline in GPA for students who join fraternities and sororities, but the study’s applicability to Fraternity and Sorority Life (FSL) at Elon University is complicated.

The study, published last month in the Economics of Education Review, quantified and analyzed the effects of fraternity and sorority affiliation on academic performance at Duke, which has a deferred recruitment policy similar to Elon’s. This study compared the GPA between freshman students first semester and their following semesters.

The study found male students showed a significant decline in GPA during their freshman spring semester — a popular time for recruitment — but insignificant change in GPA other semesters. For female students, the results revealed the opposite. According to their research, GPAs significantly decline during females’ spring semester during their sophomore year, when they are responsible for initiation and recruiting new members.

Elon adheres to much of what was found in the study, but some numbers provided by the Office of Fraternity and Sorority Life go against the findings. Unlike the Duke study, Elon does not control for factors such as class difficulty, students’ Scholastic Aptitude Test scores and organization social status.

The dip in GPA during new member periods for fraternities is recognized as a problem by Fraternity and Sorority Life.

Dan Faill, director of FSL, said he believes this decline is likely because of the time commitment required to be in a Greek organization.

“Elon data does show that men participating in fraternity life have lower GPAs during their new member period than men not participating in fraternity life,” Faill said. “While I cannot speak to the sorority executive board aspect, I would postulate that both dips in GPA would be the ability to effectively manage time and organization expectations. This is why our office staff meet with chapters to reiterate the importance of academic engagement over organization meetings.”

Even with this decline during new member periods, Greek-affiliated students still have a higher average GPA than the average of all Elon students — 3.39 compared to 3.31.

Elon’s Interfraternity Council (IFC) and Panhellenic Association (PA) have a GPA requirement to rush of 2.8, and National Pan-Hellenic Council’s (NPHC) is 2.5. Some organizations have their minimums set higher.

Senior Jordan Lockhart, former PA president and member of the Epsilon Delta chapter of Delta Delta Delta sorority, believes the GPA requirement is necessary for ensuring that students are able to handle the commitment of Greek life while still focusing on academics.

“To rush, you want to make sure that you’re already handling college well enough,” Lockhart said. “If you are already below that 3.0 after your first semester, you probably have some acclimating to do. Maybe adding another level of responsibility isn’t a good idea for you right now.”

Lockhart emphasized that students involved with FSL should remember they are in school to learn first, but some students may not take this priority seriously. Senior Michael Goldstein, former IFC president and also a member of the Theta Omega chapter of Sigma Chi Fraternity, believes GPA is an indicator of the organization’s involvement.

Regardless of the numbers showing that Greek-affiliated students have a higher average GPA than the average Elon student, Goldstein said he still believes that fraternities could be doing more.

“I think the academic standards in the Interfraternity Council community are absolutely pathetic and that none of the organizations hold the other organizations accountable from an academic standpoint,” Goldstein said. “There’s no desire to improve or wanting to make their grades better, and I don’t see anything changing anytime soon. All the tools and resources are available and waiting for them, and it’s a matter of whether they’re finally willing to start using them.”

Lockhart believes the decline in GPA could be from students losing touch with their organization.

“It becomes more about you and what you need out of it, rather than what you can give to it, and I definitely think that’s where a lot of the problems come from,” Lockhart said. “I think a lot of the problem comes from people taking; they stop giving to their organization, and so maybe that means they stop going to study hours and their GPA goes down, or maybe it means they are skipping chapter and then they lose touch. Then that accountability falls away.”

A large part of the reason why Greek affiliation can negatively impact academic performance is the time commitment expected from being in a fraternity or sorority. Obligations vary based on position in the organization and the time of year.

Policies put into place by both FSL and individual chapters hold students accountable for their academic achievement.

Faill said Jordan King, FSL assistant director of chapter development, works closely with each organization during their intake process to highlight Elon’s expectations regarding academic performance while students go through this process.

“This is done to reiterate that academics should be a priority throughout their membership, and activities should not detract or affect their academic endeavors,” Faill said. “While mandatory activities may cut into student’s studying or homework time, affiliated students said they still see a positive impact.”

For junior Janae Williams, president of the Xi Omicron chapter of Zeta Phi Beta Sorority and vice president of Elon’s NPHC, having “scholarship” as one of her sorority’s primary principles motivates her to be a better student.

“For me personally, joining my organization, while, yes, it is a service organization, but one of our main principles is scholarship,” Williams said. “So for me, it drove me to be the best academic version of myself and helped me boost my GPA, just because I didn’t want to be the one sister who brought the entire chapter GPA down.”

This motivation has helped Williams maintain a steady increase in her GPA since joining her sorority. This is the same for other students as well.

“Even though I have that one test I didn’t do so great on, my sister was there to tell me, ‘You’re smart, you know you know this, you know you just didn’t have enough time more or less to study for it,’” Williams said. “So that’s why I see both aspects, the pros and the cons of coming from a small chapter or even being in a Greek organization, because you do feel like you’re torn in a thousand different directions to make sure that everything gets done, but at the end of the day, the people that are going to be there for you are your sisters.”