The stars behind the scenes of The Importance of Being Earnest 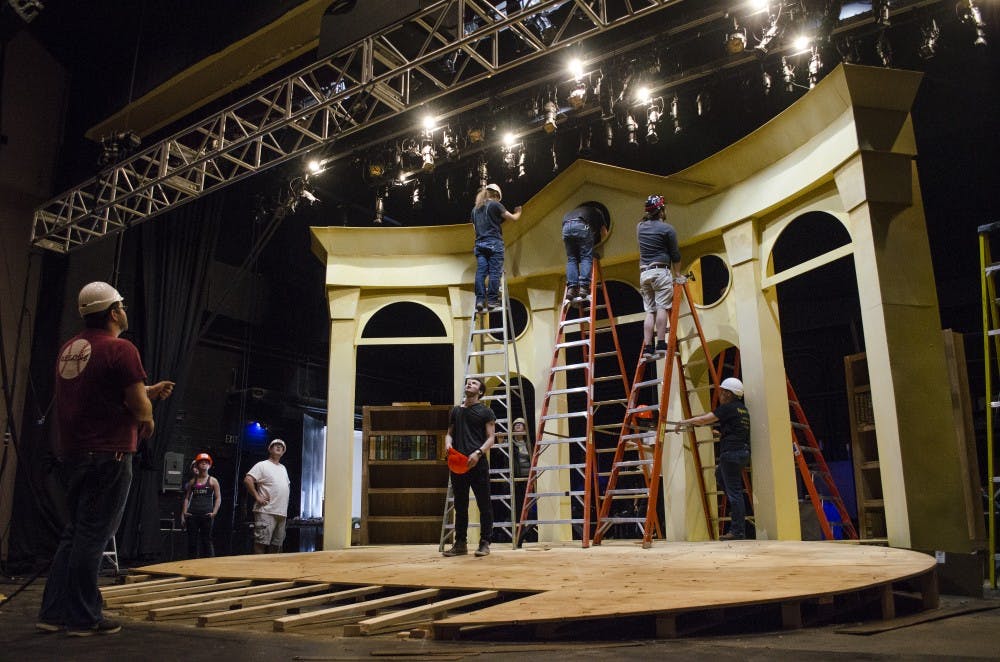 
Within hours of the final bow for Elon University's production of "The Importance of Being Earnest," the stage looked as if the show never happened.

The applause sounded and then faded to a slow clap. A man in the aisle seat rose and offered his hand to the woman next to him, his eyes following the performers as their beaming smiles blinked off and their bodies sank down stage for the last time.

Elon University’s Department of Performing Arts production of “The Importance of Being Earnest” opened April 6 for a three day run in McCrary Theatre. While the cast members are the visual focal point of the audience the story itself is brought to life by the men and women behind the curtain.

In early November of last year, “The Importance of Earnest” creative team — composed of lighting, scene, sound, costume, and prop designers — met in the Center for Performing Arts design lab. Aside from budgeting and hiring work, the designers were the first to look at the show, stretching it and molding it to fit professor of performing arts and director of this production Kirby Wahl’s vision. Two months later, the production team began to meet, and finally, a month later, the actors were cast.

Natalie Taylor-Hart, assistant professor of performing arts and scenic designer, provides the visual context to the story. During creative meetings, she worked alongside the director and other designers to create the world that the story would live in. She wanted to dress the space the way the characters would have dressed the space.

“The Importance of Being Earnest” was limited by budget and space, so Taylor-Hart made decisions on what sort of infrastructure could be accomplished. The Palatine-inspired architecture in the manor house background was minimal, but offered commentary on the show.

“All of the visual elements together, coupled with costume design, and lighting design, the style and gesture of the actors, all of those blend together to give the audience information about the story itself, as written,” Taylor-Hart said. “And also we can provide further commentary based on how we arrange the visual elements.”

After her creative work was done, she passed material to the technical director, the paint charge, and the properties master to illustrate how each area would be executed.

“Once the show opens, my job is done. Then I’m already off onto the next show!” Taylor-Hart said.

Cecelia Nelson’s first productions properties master is “The Importance of Being Earnest.” As properties, or props, master, Nelson is responsible for gathering and making props, and then figuring out how the crew will get the artifacts on stage.

“Anything an actor interacts with on stage is my job,” Nelson said. “That’s anything from the teacups, to the furniture, to the journals.”

Often the process consists of many rounds of trial and error. But for “The Importance of Being Earnest,” the question was less about how to keep items from breaking, and more about how to keep things from spilling.

“My favorite thing to work with was all the consumables, so basically all the food and drink they had on stage,” said Nelson. “It took a lot of coordination with the actors and their blocking to figure out how many cucumber sandwiches they needed, or how much tea they needed, or how to make sure the tea wouldn’t spill anywhere.”

As scenic designer, Taylor-Hart does not interact much with the cast. However, Nelson had to stay aware of how all of the props were going to come into contact with the actors.

“Does this work for you, does this not work for you?” Nelsen said. “How do I need to change this so it works better?”

Although this was only her first show, Nelsen was proud of what she’s accomplished and has enjoyed the process along the way.

“When you first walk into a theater for a show, and you see all the things on stage, it tells a story before the story has been told,” Nelsen said. “It’s more tangible than light, or sound.”

Del Pizzo read through “The Importance of Being Earnest” last summer, and the project has turned into his capstone project. As lighting designer, Del Pizzo works closely with Wahl and Taylor-Hart to translate the script from words and scene design schemes, to lighting moves and cues.

Like the scene design, Del Pizzo used uplighting to imitate architectural shapes and forms. And like Taylor-Hart, once the curtain opens, his job is done. Nevertheless, Del Pizzo is there to make sure his vision is executed.

At showtime, the curtains peel open and a soft spotlight of lilac falls on the stage. Proof of hours of production and design are strewn across the set. But it isn’t until the first character enters that costume designer Jack Smith’s creations can capture the stage.

Smith, a professor of performing arts, spent over ten weeks working on costumes for the show. He works with other designers, but ultimately the most important relationship is between the actor and the costume.

“When it gets down to the nitty gritty, I’m working with the actors and we’re finding out who these people are,” Smith said. “We’re making subtle choices that the audience will probably never know, but the actor will.”

In particular, Michael Tourek, a professional hired to play Lady Bracknell, had costume elements that helped him get into character.

“All of his underwear was made for him and it was frilly with ribbons and lace trims,” Smith said. “The audience never saw that, but as the actor was getting dressed each night, he knew that all of this was underneath what he was wearing.”

Smith was assisted by senior Shay Hopkins-Paine, who acted as the milliner, or hat designer.

“He’s amazing at stopping whatever he’s doing and being able to jump right in and help,” Hopkins-Paine said.

Although many of his choices and creations will not be recognized by the audience, they are nevertheless necessary to create the world of “The Importance of Being Earnest.”

“The audience sits there and sees that, and did any of them pick out that they were both wear polka-dotted dress shirts at the top of the show? No,” Smith said. “But does it have an impact on them? Yes.”

The curtains close for the final time, and when the last audience member glances back at the stage, the quiet set rests peacefully.

Three hours later, it will be as if the show had never happened. Production manager Bill Webb, production manager, oversees striking the set, or completely removing the show from the space. Everything is broken down, unscrewed, unloaded, stored or thrown away. Costumes are cleaned and put away; props filed and stored.

Everyone involved in the production including director, designers and actors came together to dissemble the set..

“You have a whole variety of people that are involved in the process,” Webb said. “All of the performers in ‘The Importance of Being Earnest’ are responsible for participating in strike, so as they get out of costume and get out of makeup, they’ll start coming in and getting involved.”

Senior Hayden Palmer, who played Reverend Chasuble, has participated in many strikes since coming to Elon.

“We’re given a few minutes to go outside, greet people, but then once we come in here it is work,” Palmer said. “We’re given assignments, typically it’s random, just we need bodies doing these jobs.”

In the end, the culmination of five months of meetings, designs, sweat and tears is gone by the next day. But the lasting impression of the show to its audience is the culmination of millions of purposeful choices; the subtle darkening of a scene, two matching polka dot shirts, one last cucumber sandwich, a smudge of paint strokes on a window.

“They’re all conscious decisions,” said Del Pizzo. “Like adding a little color to it that you’ll never notice but you see. You can’t know what you don’t know.”