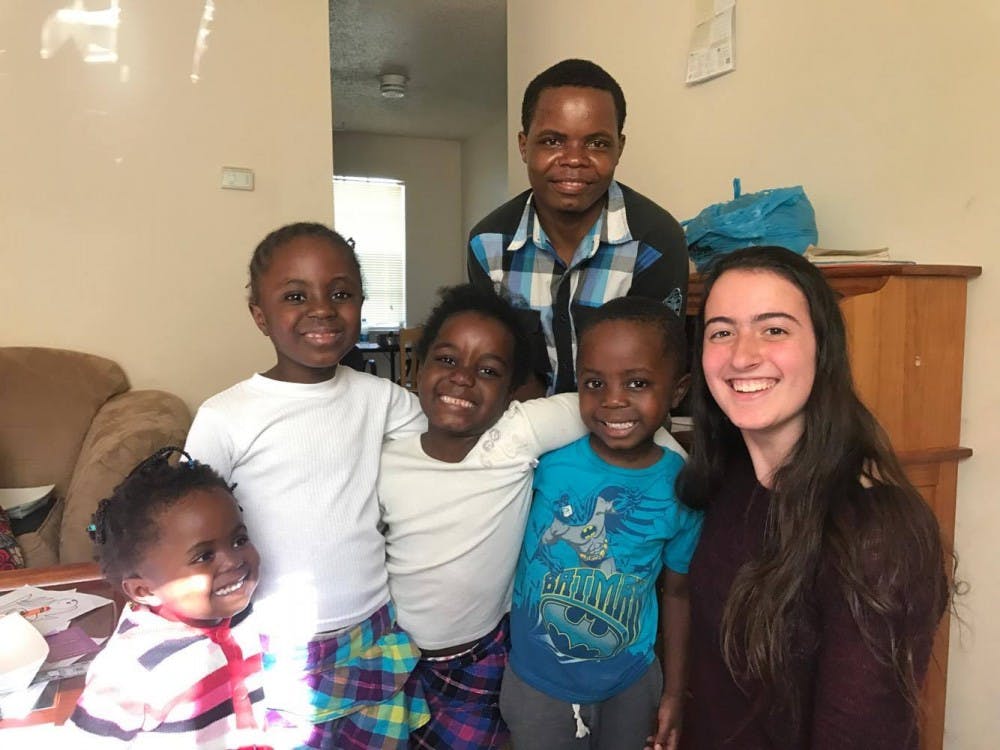 Sophomore Amy Belfer, who was recently named a Newman Civic Fellow, helps members of a refugee family settle into life in Burlington.

“I’m from Westchester, New York. My major is human services, and I have minors in Spanish, theater and poverty and social justice.”

For many people, this may seem like a mouthful of an introduction, but to sophomore Amy Belfer, it’s the norm.

Belfer has been exposed to the world of social justice since childhood. She grew up watching her father work at a nonprofit that built houses for the homeless.

“I always saw his passion for engaging the community and helping those around him, so I think that influenced the person I became,” Belfer said.

She brought that passion to Elon University and has already improved the community around her, both on and off campus.

When Belfer arrived at Elon, she did not think there were enough networks on campus that could facilitate activism. Wanting to fill that gap, Belfer started the Hall for Social Change, a student directed living learning community (LLC) in the Colonnades neighborhood.

Throughout the year, the hall has focused on two different themes: criminal justice and the opportunity gap. Belfer organized conversations with faculty members and created partnerships with the Burlington community to help ignite passion for social justice in her residents.

“The LLC has cultivated a spirit of change,” said one of her residents, sophomore Kenneth Brown Jr. “It has restored my faith in people and that people are truly stronger when they come together.”

Brown said that Belfer facilitates social justice through her “bubbly energetic self and her willingness and dedication to impact people no matter how small or big.”

Elsewhere on campus, Belfer is the director of Human Rights for Elon Volunteers where she oversees work done with Amnesty International and has helped a family of refugees from the Democratic Republic of the Congo settle into life in the United States.

“I didn’t realize how much body language and smiling can help you really connect with people,” Belfer said.

Belfer’s commitment to social justice has not gone unrecognized. She was recently named a Newman Civic Fellow, a distinction awarded by Campus Compact for distinguished civil engagement.

Campus Compact is a national organization that represents around two million students and is composed of more than 1,000 university presidents including Elon President Leo Lambert.

Lambert personally wrote a statement for Belfer after she was nominated for the fellowship by multiple professors.

Brown, who was awarded the fellowship last year, said that Belfer is the perfect candidate for the award.

“It’s about someone’s dedication to making a difference in their community no matter how big or how small and Amy embodies that,” he said.

Belfer is looking forward to a conference of more than 200 Newman Civic Fellows later this year where she will be able to learn about how other universities incorporate civic engagement on their campuses.

“It will be interesting to see campuses that do have more politically active conversations and events around campus and how I can bring the knowledge back here and make Elon more socially active,” she said.

Belfer hopes that she can make Elon a campus with a stronger focus on social justice. She believes that facilitating meaningful conversations and activities relating to people’s identities is the key to a more civically engaged campus.

“Promoting open dialogues where people are vulnerable gets people to connect on a deeper level,” she said.

She also works with the local NAACP and hopes to bring a chapter to Elon in the near future. She hopes that having a chapter on campus will help spread the word about rallies and marches and encourage students to attend.

Despite her goals, Belfer believes that Elon has made strides to create a more inclusive campus this year, highlighting collaborations between organizations such as Elon Volunteers and the Truitt Center among others.

“There are so many incredible people [at Elon] that really care about the people around them and the community around them,” Belfer said. “I’ve learned so much from my peers and faculty and staff and I’m so honored to get to work alongside them to create positive social change.”